Why is the War Machine In Our Schools? 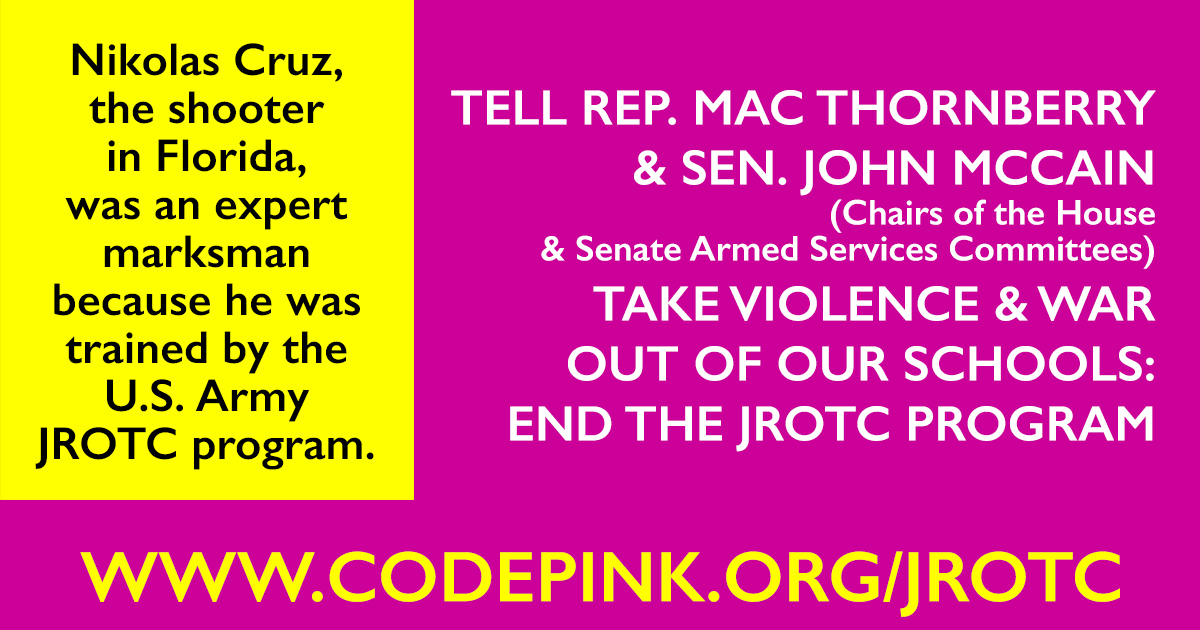 It is so beautiful to see young people in this country rising up to demand an end to gun violence. But what is Donald Trump’s response? Instead of banning assault weapons, he wants to give guns to teachers and militarize our schools. But one of the reasons for mass school shootings is precisely because our schools are already militarized. Florida shooter, Nikolas Cruz, was trained by U.S. Army Junior Reserve Officers' Training Corps (JROTC) program while he was in high school.

Yesterday, Divest from the War Machine coalition member, Pat Elder, was featured on Democracy Now discussing his recent article about the JROTC in our schools. The JROTC teaches children how to shoot weapons. It is often taught by retired soldiers who have no background in teaching. They are allowed to teach classes that are given at least equal weight as classes taught by certified and trained teachers. We are pulling our children away from classes that expand their minds and putting them in classes that teach them how to be killing machines. The JROTC program costs our schools money. It sends equipment. But, the instructors and facilities must be constructed and paid for by the school.

The JROTC puts our children’s futures at risk. Children who participate in JROTC shooting programs are exposed to lead bullets from guns. They are at an increased risk when the shooting ranges are inside. The JROTC program is designed to “put a jump start on your military career.” Children are funneled into JROTC to make them compliant and to feed the military with young bodies which are prepared to be assimilated into the war machine. Instead of funneling children into the military, we should be channeling them into jobs that support peace and sustainable development.

Tell Senator McCain and Representative Thornberry to take the war machine out of our schools! The JROTC program must end immediately. The money should be directed back into classrooms that educate our children.

The Divest from the War Machine campaign is working to remove our money from the hands of companies that make a killing on killing. We must take on the systems that keep fueling war, death, and destruction around the globe. AND, we must take on the systems that are creating an endless cycle of children who are being indoctrinated at vulnerable ages to become the next killing machine.  Don't forget to post this message on Facebook and Twitter.

P.S. Do you want to do more? Start a campaign to get the JROTC out of your school district or state. Email [email protected] and we’ll get you started!