Why is Donald Trump Lunching With a Saudi War Criminal While Yemenis are Starving? 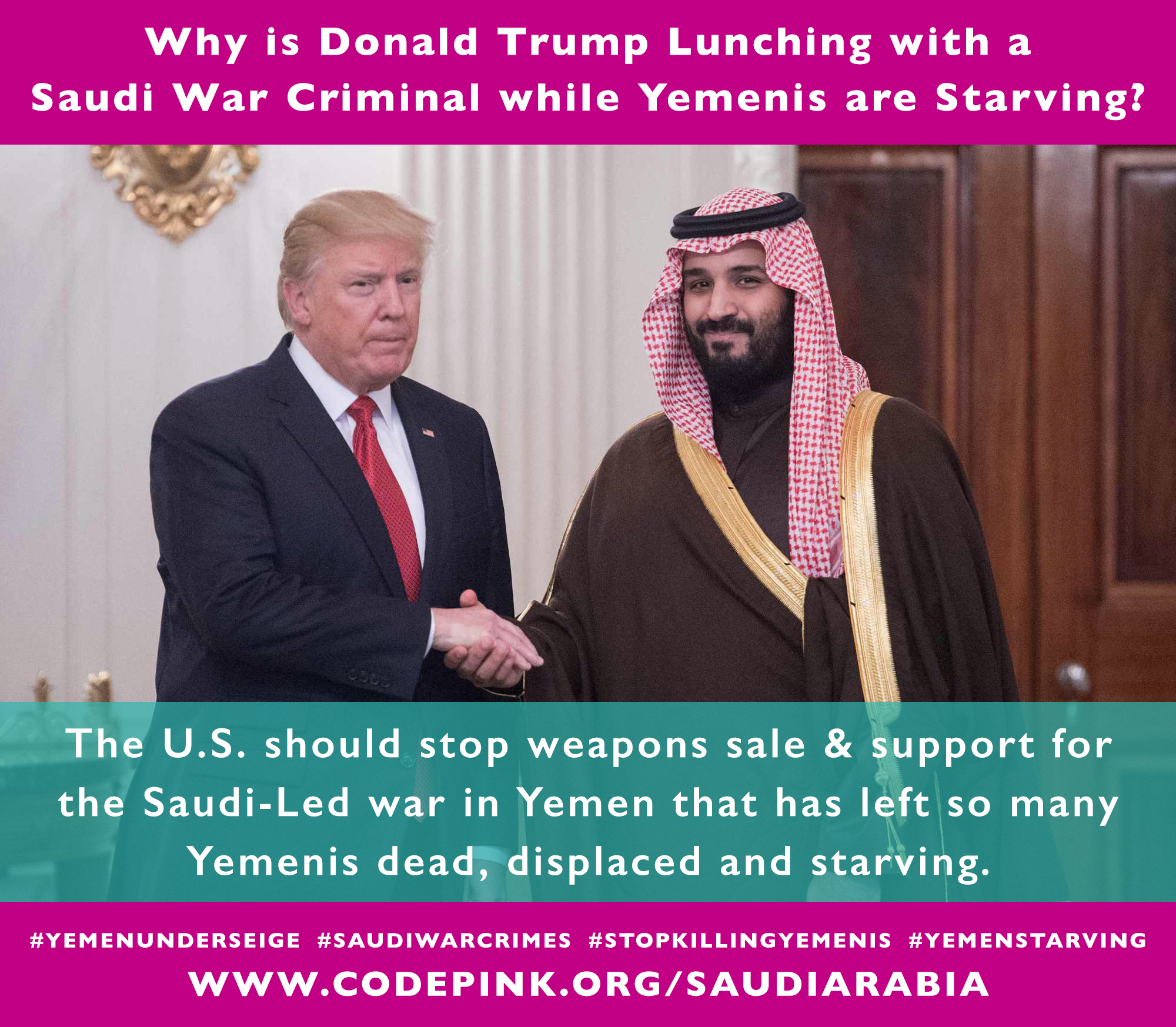 While President Trump sat down for a sumptuous meal at the White House on Tuesday, March 14 with Saudi Deputy Crown Prince Mohammed bin Salman, millions of Yemenis are going hungry thanks to Trump’s lunch guest.

Prince Salman is only 31 years old, but as the king’s favorite son, he was put in charge of the nation’s two most critical sectors: the economy and the military. A brash defense minister, the young prince made the disastrous decision to interfere in an internal conflict in neighboring Yemen.  Starting in March 2015, Prince Salman started a bombing campaign against the Yemeni Houthis, a group the Saudi rulers consider aligned with Iran. The bombing has gone on, relentlessly, for the past two years. UN High Commissioner for Human Rights Zeid Ra’ad al Hussein said that possible war crimes had been documented with “alarming frequency” since the Saudis became engaged.

In addition to thousands of Yemeni civilians being killed directly by Saudi bombs, the bombing has also been responsible for the massive destruction of civilian infrastructure, from water facilities to sewage treatment plants to hospitals. Particularly devastating has been the bombing of the port of Hodeidah, where most of the humanitarian aid has been entering the country. Two-thirds of the population now requires food assistance and a Yemeni child dies every 10 minutes from hunger and the lack of medical facilities. UN Secretary General Antonio Guterres has called Yemen the “largest food insecurity emergency in the world.”

The Saudis are threatening to make matters significantly worse by launching a major military campaign in the area of Hudaidah that will make the port totally inaccessible.

It’s not just the Saudis and Houthis who are responsible for Yemen’s destruction. As Senator Chris Murphy said, the United States also has blood on its hands. President Obama sold massive amounts of weapons to the Saudis and helped the Yemen intervention with logistical support, including refueling Saudi planes in the air. Towards the end of his tenure, President Obama began having second thoughts due to the mounting civilian death toll, including a strike on a Yemeni funeral in October 2016  that killed more than 100 people. That’s why in December 2016, the Obama administration halted a planned sale of $390 million in precision-guided munitions from Raytheon to the Saudi government.<

President Trump is considering moving forward with this sale. Human rights groups worry that the sale could allow the Saudis to modify thousands of air-to-ground munitions that could be used in strikes against civilians. In a letter to Trump released the same day as the luncheon, Amnesty International urged Trump not to sign off on the sale. “There is substantial risk that Saudi Arabia…could use new U.S. arms to further devastate civilian lives in Yemen,” Amnesty wrote. “This could implicate your administration in war crimes or violations of international humanitarian law. Amnesty International researchers have already found both unexploded U.S. bombs and identifiable fragments of exploded U.S. bombs among the ruins of Yemeni homes and other civilian objects.”

Trump’s Secretary of State Rex Tillerson has reportedly approved the resumption of the sale, but it needs White House approval before it moves forward. “If approved, this deal would essentially have President Trump throwing gasoline on a house fire and locking the door on his way out,” said Amnesty’s US Executive Director Margaret Huang. “President Trump must not approve this arms deal.”

The Trump administration has signaled a desire to step up the fight against the Houthis in Yemen as part of its plan to get tough on Iran. It cited Iran’s support for the Houthi rebels when putting Iran “on notice” in February. The Saudi leaders are enthusiastic about Trump’s hawkish position on Iran. They also appreciate his support of the oil industry (proven by naming the CEO of Exxon as Secretary of State) and his lack of interest in human rights. And they are delighted that unlike Yemen, Saudi Arabia was not included in Trump’s Muslim travel ban, despite the fact that more Saudis have killed Americans on US soil than any other foreign nationals (remember: 15 of the 19 September 11 hijackers were from Saudi Arabia).

It seems that the admiration is mutual. As Trump and Prince Salman sat for a photo op after lunch, Trump smiled, pointed to the Saudi delegation, and said, “They are nice people.” No, Mr. Trump, they aren’t. They behead people for peaceful dissent at home. They export the extreme Wahhabist ideology that fuels terrorist groups. And they are committing war crimes in Yemen. The United States should not be selling them any weapons or helping in their reckless military adventure that has left so many Yemenis dead, displaced and starving.

Medea Benjamin, cofounder of www.codepink.org, is author of Kingdom of the Unjust: Behind the US-Saudi Connection.