Why did she cancel her appearance? 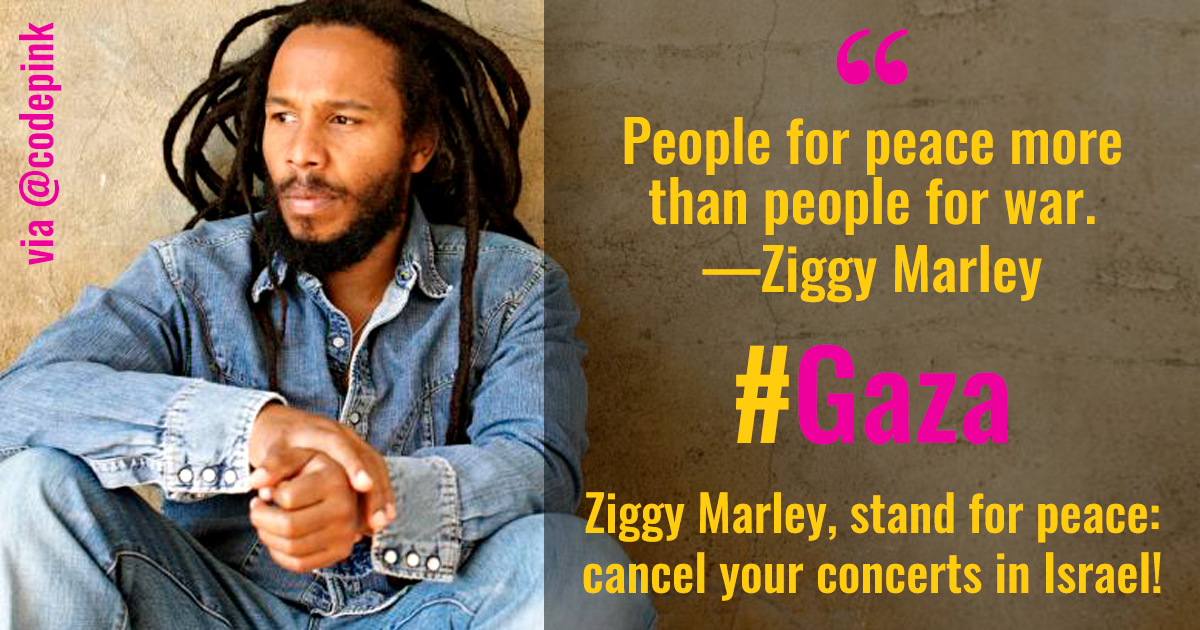 The movement for Palestinian rights is starting to win. Last week, star actress Natalie Portman announced that she was canceling her appearance at the Genesis award ceremony in Israel. “The mistreatment of those suffering from today’s atrocities,” she said, “is simply not in line with my Jewish values.”

Since the Great Return March began four weeks ago in Gaza, 35 Palestinians have been killed. Among them have been 15-year-old Mohammed Ayoub, who was shot in the head last Friday, and 30-year-old Yaser Murtaja, who was shot on April 6 while wearing a navy-blue protective vest clearly marked ‘PRESS.’ Over 1,700 people have been injured by live bullets, sentencing many of them to lifelong disabilities.

One of the strongest ways to oppose Israel’s crimes is for artists to refuse to perform in the apartheid state. So, we are asking reggae artist Ziggy Marley to cancel his upcoming July-August performances in Israel.

Ziggy’s lyrics, “people for peace more than people for war, and people for justice it’s never too far” are antithetical to Israel’s system of occupation. To show consistency with the words that he sings, he must take a stand against checkpoints, roads divided between Jews and Palestinians, the arresting children in the middle of the night and the holding of over two million people in the largest open-air prison on earth.

Palestinians in Gaza have electricity for only four hours a day. 97% of their drinking water is contaminated by sewage and salt. Because of the blockade, Gaza hospitals don’t have the proper supplies to treat the wounded.

Help us call on Ziggy Marley to act on the principles of peace and justice that he sings about. Ask him to cancel his July-August, 2018 concerts in Israel.

Right-wing Israeli politicians responded to Natalie’s announcement with a barrage of hate. Likkud party member Oren Hazan called for the Jerusalem-born actress to have her Israeli citizenship revoked. Israeli Infrastructure, Energy and Water Minister Yuval Steinitz said her actions “bordered on anti-Semitism.” We say that Natalie’s actions are those of a someone committed to ethics and the pursuit of peace. We thank her for her brave stand and call on artist Ziggy Marley to be the next to act for peace.

In support of all the peaceful protesters in Gaza,
Ariel Gold and the entire CODEPINK team