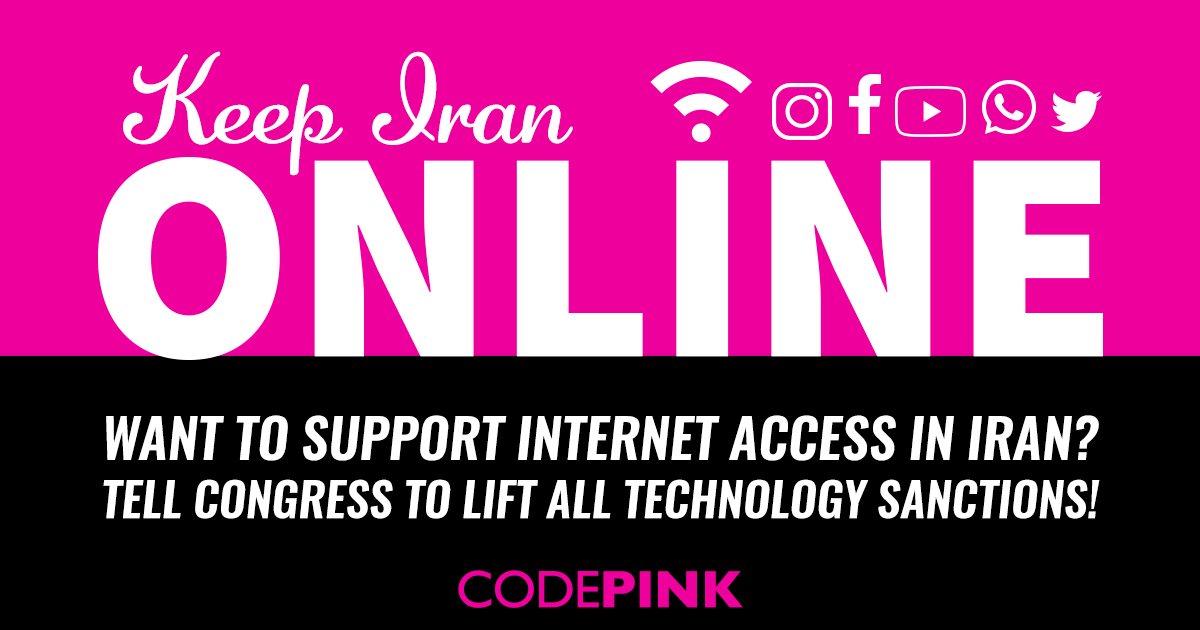 From November 17–24, due to an almost complete Internet blackout by the Iranian government, I was unable to communicate with any of the new friends I made during my time on the October 2019 CODEPINK peace delegation to Iran. As Iran shut down Internet access and used extreme violence to quell protests sparked by a 50% increase in fuel prices, I worried greatly about them — according to Amnesty International, at least 208 people were killed and thousands arrested.

U.S. sanctions are playing a major role in Iran being able to shut down Internet access. Until the U.S. pulled out of the Iran nuclear deal, Iran’s Internet was hosted by a combination of domestic and international providers. But after the U.S. reimposed sanctions, only domestic providers were available, giving the Iranian government the ability to shut off the Internet inside the country — a violation of the right to freedom of expression.

Tell Congress that all U.S. sanctions on Internet technology to Iran must be lifted AND tell Internet technology companies Amazon Web Services, Google Cloud, and Microsoft to reactivate domain fronting — disabled by Amazon and Google in April 2018 — so that Iranians can resume using international Internet providers.

Right-wingers from the U.S. and Israel are feigning outrage at Iran’s Internet blackout and violence against protestors. Israeli Defense Minister Naftali Bennett put out a video appealing to technology experts around the world to “help the long-suffering Iranian people gain open access to all social media." U.S. Senators Cruz, Cotton, Cornyn, Blackburn, Barrasso, and Rubio penned a letter to Donald Trump asking him to “take all available technical measures to restore access to the Internet in Iran” and “ impose additional pressure in the form of additional sanctions against the Iranian regime.” But it is precisely the Trump administration’s sanctions that are giving Iran the ability to blackout the Internet. Tell Congress that all sanctions on technology in Iran must be lifted.

In 2017, Iran shut down the Internet in response to protests inside the country, but because the country was so dependent on international Internet infrastructure, they could only afford to close the Internet for 30 minutes. Fast-forward to 2019 under U.S. sanctions, and Iran was able to blackout 93% of the Internet for a week. With even more sanctions placed on Iran this week, next time could be even worse. Contact Congress now!

In solidarity with the people of Iran,

PS: Check out our blogs from Iran, and read about the beautiful country and its people, and then make a year-end donation to support our work for #PeaceWithIran.