Week 4 at the Saudi Arabian Consulate in Los Angeles 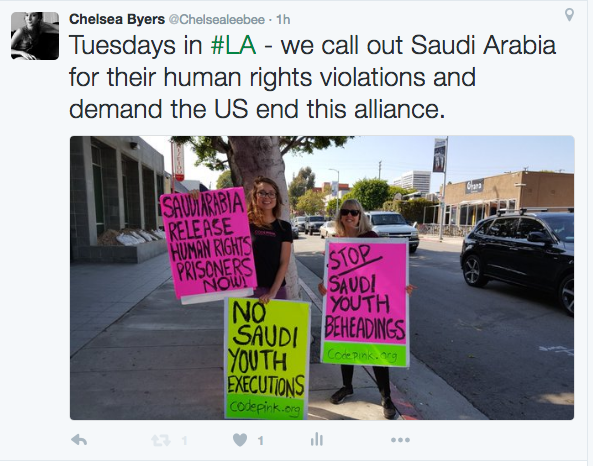 Tuesday, May 17th marked Week 4 in this ongoing demonstration of our opposition to the US alliance to the repressive regime of Saudi Arabia. Starting on April 26th, CODEPINK has stood outside the Saudi Arabian Consulate on the Westside of Los Angeles every Tuesday at 3:30pm, just before the building closes up for the day.

This Tuesday, I arrived almost 20 minutes ahead of my ally Michele who planned to meet me and was instead greeted by four security guards and several employees and constituents of the consulate. They questioned me and my position for being there protesting, to which I explained that what Saudi Arabia is doing is a threat to democracy and human dignity and as a US taxpayer, I do not wish to see my tax dollars spent on aiding human rights violators. One man stated that “Saudi Arabia is the richest country in the world and does not need U.S. to give them money for anything.” uh… Great!?  Could you please tell your king that?

The plight of the three young Saudi teens sentenced to execution for peaceful protest is just one example of the vast array of human rights violations Saudi Arabia so boldly commits in the face of an international audience. These human rights violations include not only the extreme persecution of women, but immensely heinous crimes against LGBT people from raiding of same-sex couple marriages, and sending people to jail for sodomy, to threatening the death penalty for coming out. As the day also happened to be the International Day Against Homophobia, Transphobia, and Biphobia - I took the opportunity to shed light on this harsh reality and call the U.S. out for a need to show greater solidarity and compassion to the LGBT community by cutting ties with a regime that executed three gay men by beheading and Saudi Arabia sentenced another gay man to three years imprisonment and 450 lashes for meeting men on Twitter.

The men that met me out front insisted that what is happening in Saudi Arabia is not guilty of any persecution: “This is the way it is - leave it alone. Those who are imprisoned for violating this set of laws deserve to be there because law is law.”

This rigid worldview is the core of the problem at play - what is always must be. I am urging people to reconsider, to step outside this comfort zone to do what is right. It is an extreme disservice to all progress made in the United States to continue fueling the oppressions of people in Saudi Arabia. We must end the alliance to Saudi Arabia now.

In the second half of the hour out front, Michele and I had 3 productive conversations with pedestrians who expressed their concern for the issues and confusion as to how little attention this is getting on a national scale. These conversations, in addition to the many honks and waves and peace signs, flashed from car windows affirmed the necessity of taking action on this issue.

Chelsea Byers is a political organizer and community strategist. She has trained thousands of student leaders in organizing, lobbying and advocacy skills for the betterment of public education. In 2014, Chelsea was awarded the Community Ally award from Northern Arizona Pride Association for her work advancing LGBT issues. A member of National Women's Political Caucus and a Vagina Warrior, Chelsea works towards gender equity and advocates on behalf of feminist leadership. She works with the rebel-rousers at Beautiful Trouble to coordinate a creative action training program and supports campaigns for weapons divestment and demilitarization with CODEPINK: Women for Peace. An advocate for the women's self-determination, Chelsea is passionate about intersectionality politics, capacity building, and creative engagement.