By Janet Weil and Chelsea Byers

Ali Mohammed Al-Nimr, Dawood Hussain Almarhoon and Abdullah Al-Zaher are not Californians, but these 3 young men, condemned to execution (2 of them by beheading) by the Saudi Arabian government for their participation in “Arab Spring” protests, were much on the minds of human rights activists in San Francisco and Los Angeles on April 26.

A group of 8 activists organized by Michele Mattingly went to Senator Feinstein’s office to plead for the senator’s advocacy for these youths. We met with staffer Caitlin Meyer. Michele, after presenting a packet including photos of the three young men, letters and other documents, began the meeting with our ask: that Senator Feinstein send a letter to Secretary of State Kerry requesting that he push the Saudi government to rescind the order for their executions. 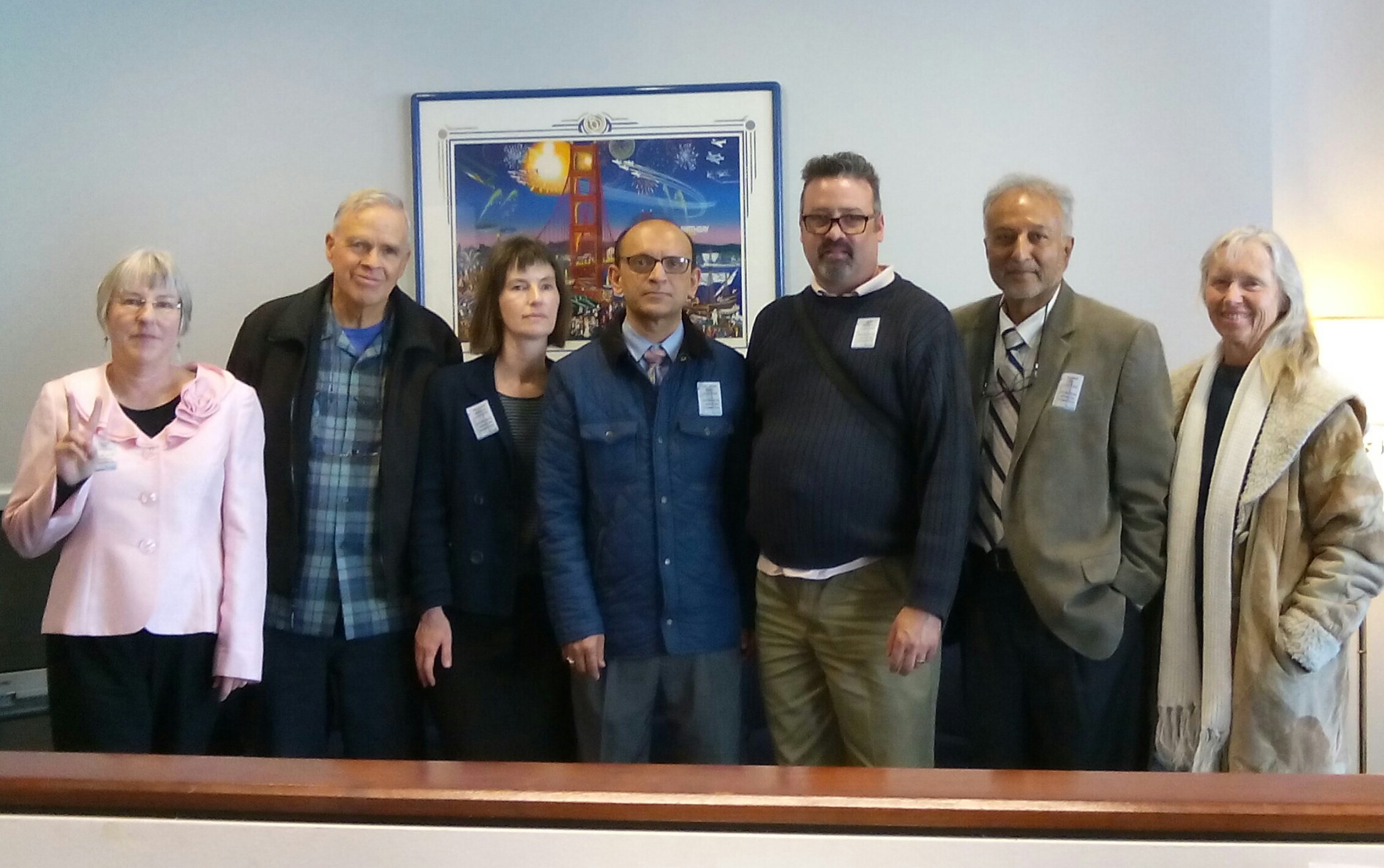 Michele then stated the facts of these cases:

The threat of execution that hangs over these youths is part of a larger context of stepped-up repression by the Saudi government in 2016. Last January, the Saudi Arabian government executed dozens of dissidents, including people who were arrested as youths.

Caitlin informed us that a Feinstein staffer in DC recently sat down with the Saudi ambassador to discuss the case of Ali Al-Nimr. Senator Feinstein is aware of these young men and has also been an advocate for Saudi blogger Raif Badawi; she recently wrote to Mrs. Badawi. Feinstein thinks that advocating for these young men and others is best done “quietly” and that her going public with opposition to their executions would not be effective.

On behalf of CODEPINK, I told Caitlin that CODEPINK has been circulating a petition on behalf of these youths; that our video on Ali Al-Nimr has received 1 million views in just in a few days; and that there would be a protest in front of the Saudi consulate in Los Angeles later that afternoon. “People in California care deeply about these young men,” I pointed out, “and we are looking to Senator Feinstein for leadership.” I also brought up the issue of not only stopping the executions, but that the senator should advocate for fair trials for the young men, which they did not receive. Caitlin received from me a letter to President Obama on these cases, signed by 18 organizations, including CODEPINK.

Peaceworkers Executive Director David Hartsough brought up the issue that “Saudi Arabia is seen as a great ally” and that “killing nonviolent protesters doesn’t look very good for our [U.S.] image.” David added, “Every human being should be able to speak their mind - and heart!”

Members of the Interfaith Council of Contra Costa raised the issue of rights for religious minorities and their appreciation of Senator Feinstein advocating for human rights during her career.

Caitlin promised to send a full report of our meeting to her counterpart in DC that same day, and to see that the senator received our asks for her advocacy for no executions and new, fair trials for Ali, Dawood and Abdullah. She will get back to us promptly.

In Los Angeles later that day, nine activists gathered outside the Saudi Arabian consulate in West Los Angeles for an evening drive time demonstration. Engaging with both traffic on the packed street outside the consulate and people walking by, the demonstrators held signs emblazoned with messages about the three Saudi youth and calling on the U.S. to intervene. 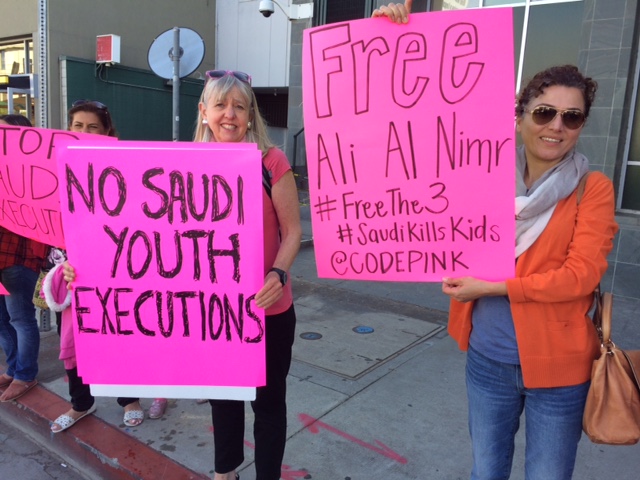 Consulate security kept a close watch on the nine of us, at one point reading the messages on our signs through a walkie talkie to persons inside. Security also called the Los Angeles Police Department, who sent three (!) beat cops to investigate. After taking my name (Chelsea Byers) and asking a few questions about our intentions (and warning us not to block traffic, which we had no intention of doing), the police officers informed the consulate security guard that we weren’t doing anything wrong and had every right to be there, demonstrating. It was a stark reminder of how differently things go in Saudi Arabia, where these three youths are facing execution for similar actions to what we were doing.

After a little over an hour, during which we got honking support from countless drivers and had conversations with several pedestrians passing by, we made plans to be back next week and departed. Notable during our visit was one interaction we had with the driver of a car departing the consulate – not particularly because of the interaction, but because the consulate security guard used his body to block the view of the driver, putting himself physically between our signs and the driver’s line-of-sight. We’ll be there a half-hour earlier next week, in hopes of bringing our message to more of the consulate’s staff as they head out after work.

Our plan is to show up weekly, as a vigil for the three boys, until Saudi Arabia agrees to rescind the execution hanging over them and give them a free and fair trial!