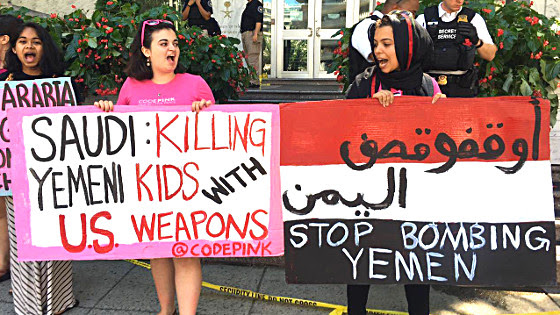 In the wake of the horrifying Saudi-led attack on a Yemeni funeral – which left at least 140 people dead and hundreds more injured – an Obama Administration spokesperson said that U.S. support for Saudi military aggression “is not a blank check.” If the administration is telling the truth and not just blowing hot air, it’s time to void the check and ban any additional weapon sales to Saudi Arabia!

Sign our petition to tell Secretary of State John Kerry that the time to end weapon sales to Saudi Arabia is NOW!

Saudi Arabia has waged a disastrous bombing campaign, using U.S.-made weapons to target civilians in attacks that amount to war crimes. The situation in Yemen has already been characterized as a “humanitarian catastrophe” and numerous news sources report that the bombing campaign has left Yemen on the brink of famine.

This should have been enough to stop the latest sale of U.S. weapons to Saudi Arabia, but unfortunately it wasn’t. Though it is already well past time for us to stop being complicit in Saudi atrocities, we hope that the news of this unconscionable attack on a Yemeni funeral will finally shame the administration to end the enabling of war crimes and ban any further weapon sales to Saudi Arabia.