US Delegation's Message of Peace Received Warmly in Pakistan: Citizen diplomacy in Pakistan’s tribal areas: "You are welcome!"

by Medea Benjamin and Robert Naiman 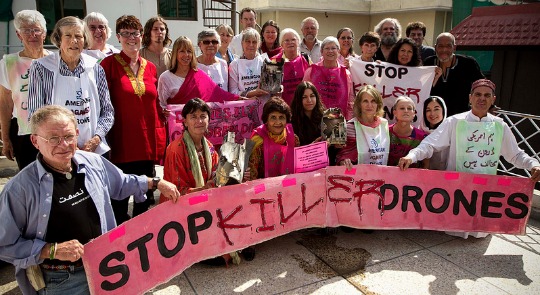 ISLAMABAD, Pakistan - Many Americans have an image of Pakistan and its people as "teeming with anti-Americanism." Americans see images on TV of angry Pakistani demonstrators burning American flags. Indeed, polls say three of four Pakistanis view the United States as an enemy.

But in the last week, we and thirty other Americans have been blessed with an experience few Americans have shared, seeing a more hopeful side of the relationship of the people of Pakistan to Americans. For the last week in Pakistan's capital, Islamabad, and then in the nation’s tribal areas, our delegation that came to Pakistan to protest U.S. drones has been showered with tremendous hospitality, warmth and friendship.

The tribal area our peace delegation visited last weekend borders Waziristan, which since 2004 has been continuously hit with U.S. drone strikes. According to The Bureau of Investigative Journalism, between 2,500 and 3,200 people have been killed in these drone strikes. A recent report from Stanford and NYU law schools noted that only 2 percent of these deaths were "high-level" targets. The rest were civilians, including women and children, and low-level fighters.

Moreover, as the report highlighted, in addition to those who have been killed and injured, the entire population of Waziristan, especially children,have been terrorized by the drones that have been constantly circling overhead, 24 hours a day, because people don't know who is going to be targeted or when the drones might strike. “The drones have changed our way of life,” we were told by Karim Khan, a Waziri who lost his son and brother to a drone strike. “People are now afraid to attend community meetings, funerals or weddings; some are even afraid to send their children to school.”

Pakistanis we met in the tribal areas last weekend are largely people who haven’t seen Americans in 10 years, since the start of the "global war on terror." This is both because the Pakistan government doesn’t allow foreigners into the region and because of the fear Americans have of the "lawless" tribal areas. The State Department travel advisory says that due to security concerns, the U.S. government restricts travel by U.S. officials in the areas we visited this weekend.

This means that many young Pakistanis in the tribal areas have never seen an American in their lives. All they may know about America is that it is a country that conducts and promotes violence in the region, whether by drone strikes, the war across the border in Afghanistan, or a U.S.-promoted offensive by the Pakistani military that displaced more than a hundred thousand people in South Waziristan.

Our group was invited by political leader Imran Khan to join an anti-drones rally in Waziristan and the special government permission we received marked the first time that the Pakistani government has admitted foreigners into the Federally Administered Tribal Areas (FATA) in nearly a decade. Despite rumors that our group would be targeted by anti-American militants, on the journey from Islamabad to Waziristan the delegation received overwhelming support from Pakistanis who held processions along the route. When we arrived in the town of Hatala to spend the night, we were swamped by hundreds of Pakistanis, particularly teenage boys, who rushed to look at this rare species and have their pictures taken with us.

The following day, the government, citing security concerns, closed the road that would have taken us to the planned rally site in Kotkai, a town in the heart of South Waziristan. So the American group held a rally with Imran Khan in the place where we had spent the night.

To the cheers of a teeming group of Pakistanis, we walked on stage holding anti-drone signs and pictures of children who have been killed in drone attacks, and delivered an apology for the death of innocent people. "We want you to know that these Americans you see here have been fighting for years against this drone policy, and will continue to do so until we put an end into to these barbaric attacks. We want to live in peace and harmony with our brothers and sisters in this region," we told the crowd.” Their response brought tears to our eyes. "You are welcome! We want peace!,” they chanted over and over, smiling, waving and cheering.

Our delegation’s call for peace, and the pictures of us with our anti-drone signs, have been carried on the Pakistani television and print media all week long. Millions of Pakistanis have seen us and heard our message. As one Pashtun man told us, putting his hand over his heart, “If you came here to win our hearts and minds, you have won mine.”

We aren't under any illusions that our single delegation will by itself abolish the drone strikes and transform the relationship between the U.S. and Pakistan to one based on peaceful cooperation. But we are convinced that current U.S. policy towards Pakistan, with its emphasis on military might and marginalization of negotiations as a means of trying to address Pakistan's security problems, is dangerously misguided and counterproductive, feeding an endless cycle of violence. Americans and Pakistanis are being taught to fear and distrust each other, instead of being encouraged to seek political resolutions of conflicts. Such a short-sighted policy won't make Americans more safe. It's time to fundamentally re-think U.S. policy towards Pakistan, and an important step forward is for Americans to see Pakistanis in the tribal areas as fully human.

Medea Benjamin ([email protected]), cofounder of Global Exchange and CODEPINK: Women for Peace, is the author of Drone Warfare: Killing by Remote Control. Her previous books include Don’t Be Afraid Gringo: A Honduran Woman Speaks from the Heart., and (with Jodie Evans) Stop the Next War Now (Inner Ocean Action Guide).


Robert Naiman is Policy Director at Just Foreign Policy. Naiman has worked as a policy analyst and researcher at the Center for Economic and Policy Research and Public Citizen's Global Trade Watch. He has masters degrees in economics and mathematics from the University of Illinois and has studied and worked in the Middle East. You can contact him here.