Transcript: Ilhan in her own words 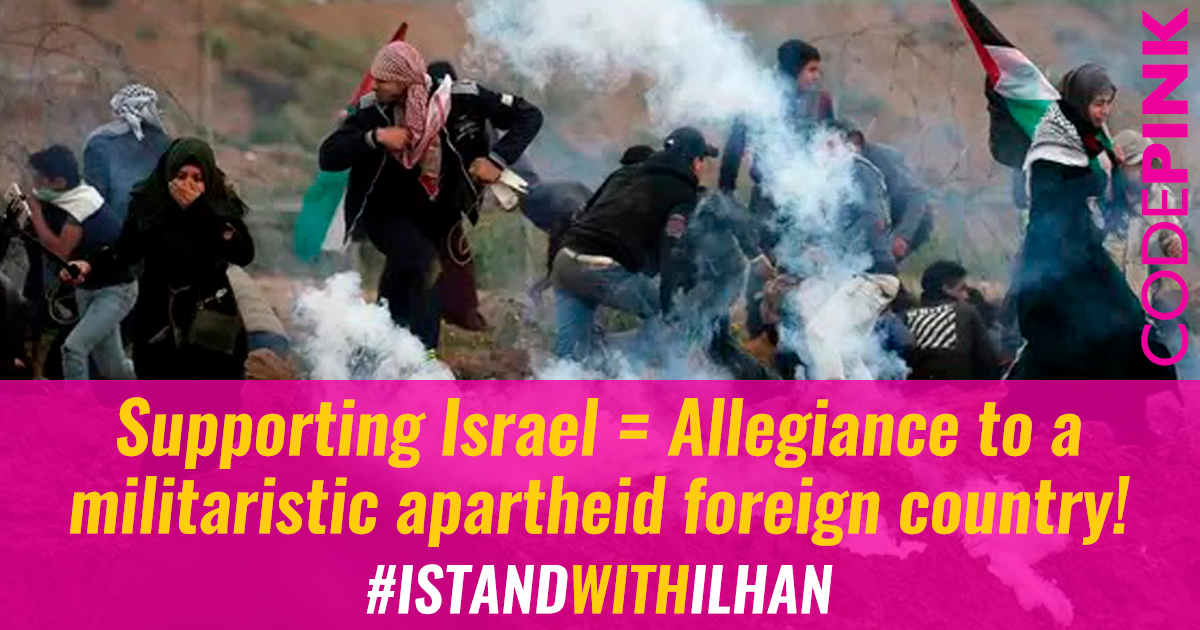 Ilhan: I get emotional every time I hear Rashida, and I think I’m just gonna stop hanging out with her, she’s messing with my [smile?].

I know that I have a huge Jewish constituency, and you know, every time I meet with them they share stories of [the] safety and sanctuary that they would love for the people of Israel, and most of the time when we’re having the conversation, there is no actual relative that they speak of, and there still is lots of emotion that comes through because it’s family, right? Like my children still speak of Somalia with passion and compassion even though they don’t have a family member there.

But we never really allow space for the stories of Palestinians seeking safety and sanctuary to be uplifted. And to me, it is the dehumanization and the silencing of a particular pain and suffering of people, should not be ok and normal. And you can’t be in the practice of humanizing and uplifting the suffering of one, if you’re not willing to do that for everyone. And so for me I know that when I hear my Jewish constituents or friends or colleagues speak about Palestinians who don’t want safety, or Palestinians who aren’t deserving I stay focused on the actual debate about what that process should look like. I never go to the dark place of saying ‘here’s a Jewish person, they’re talking about Palestinians, Palestinians are Muslim, maybe they’re Islamophobic.’ I never allow myself to go there because I don’t have to. And what I am fearful of is that because Rashida and I are Muslim, that a lot of Jewish colleagues, a lot of our Jewish constituents, a lot of our allies, go to thinking that everything we say about Israel, to be anti-Semitic, because we are Muslim. And so to me, it is something that becomes designed to end the debate. Because you get in this space, of like, I know what intolerance looks like and I’m sensitive when someone says that the words you use Ilhan, are resemblance of intolerance. And I am cautious of that and I feel pained by that. But it’s almost as if every single time we say something, regardless of what it is we say, that it’s supposed to about foreign policy or engagement, that our advocacy about ending oppression, or the freeing of every human life and wanting dignity, we get to be labeled in something, and that’s the end of the discussion, because we end up defending that, and nobody gets to have the broader debate of ‘what is happening with Palestine?’ [applause]

So for me, I want to talk about the political influence in this country that says it is ok for people to push for allegiance to a foreign country. And I want to ask, why is it ok for me to talk about the influence of the NRA, of fossil fuel industries, or Big Pharma, and not talk about a powerful lobby [group?] that is influencing policy. [applause] And I want to ask the question, why is it ok for you to push, for you to be… there are so many people… I mean most of us are new, but many members of Congress have been there forever. Some of them have been there before we were born. So I know many of them were fighting for people to be free, for people to live in dignity in South Africa. I know many of them fight for people around the world to have dignity to have self-determination. So I know, I know that they care about these things. But now that you have two Muslims that are saying ‘here is a group of people that we want to make sure that they have the dignity that you want everyone else to have!” …we get to be called names, we get to be labeled as hateful. No, we know what hate looks like. We experience it every single day. [applause] We have to deal with death threats. I have colleagues who talk about death threats. And sometimes… there are cities in my state where the gas stations have written on their bathrooms “assassinate Ilhan Omar”.

I have people driving around my district looking for my home, for my office, causing me harm. I have people every single day on Fox News and everywhere, posting that I am a threat to this country. SO I know what fear looks like. The masjid I pray in Minnesota got bombed by two domestic white terrorists. So I know what it feels to be someone who is of a faith that is vilified. I know what it means to be someone whose ethnicity is vilified. I know what it feels to be of a race that is, like I am an immigrant, so I don’t have some of the historical drama of some of my sisters and brothers have in this country, but I know what it means for people to just see me as a black person, and to treat me as less than a human. And so, when people say ‘you are bringing hate’, I know what their intention is. Their intention is to make sure that our lights are dimmed. That we walk around with our heads bowed. That we lower our face and our voice.

But we have news for people. You can call us any kind of name. You can threaten us any kind of way. Rashida and I are not ourselves. Every single day we walk in the halls of Congress and we have people who have never had the opportunity to walk there walking with us. So we’re here, we’re here to stay and represent all the people who have been silenced for many decades and many generations. And we’re here to fight for the people of our district who want to make sure that there is actual prosperity, actual prosperity, being guaranteed. Because there is a direct correlation between not having clean water, and starting endless wars. It’s all about the profit and who gets benefit. There’s a direct correlation between corporations that are getting rich, and the fact that we have students who are shackled with debt. There is a direct correlation between the White House and the people who are benefiting from detention beds that are profitized. So, what people are afraid of is not that there are two Muslims in Congress. What people are afraid of is that there are two Muslims in Congress that have their eyes wide open, that have their feet to the ground, that know what they’re talking about, that are fearless, and that understand that they have the same election certificate that everyone in Congress does. [applause]