Tone-Deaf Navy Lawsuit Calls State of Hawai’i Shut Down of Leaking Jet Fuel Tanks as “Erroneous; Arbitrary, Capricious, and an Abuse of Discretion; Clearly Unwarranted” as no “Imminent Peril” 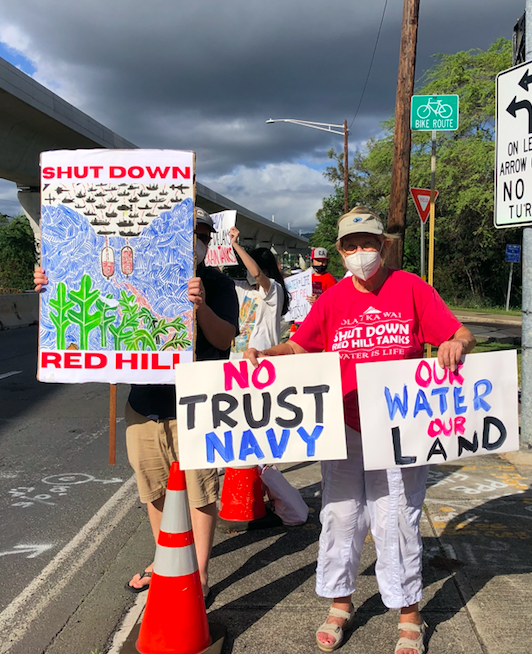 Two lawsuits filed on February 2, 2022 by the U.S. Department of Justice on behalf of the Department of Defense and the Department of Navy challenge the State of Hawaii’s emergency order to shut down and defuel the leaking 80-year-old jet fuel tanks.  These lawsuits have created another public relations nightmare for the U.S. Navy and the Department of Defense as residents of O’ahu have expressed their dismay and outrage to the continuing threat of jet fuel to their drinking water aquifer.  In November 2021, the Red Hill tank system leaked jet fuel into the drinking water of 93,000 residents in military housing around Pearl Harbor Navy Base and Hickam Air Force base.

Calling the State of Hawaii’s emergency order that came about after hundreds of military families ended up in emergency rooms with toxic reactions to the water they were drinking as “clearly erroneous; arbitrary, capricious, and an abuse of discretion; clearly unwarranted,” the U.S. Department of Justice is as tone-deaf to the anger of residents of Hawai’i as was the Navy’s initial response to their families’ appeals for acknowledgement of their illnesses and help to get safe drinking water.

U.S. Senator Mazie Hirono said, “ “This (shut down of tanks system and draining of the tanks) must happen expeditiously and without any unnecessary delays. Let me be clear: the safety and well-being of the people of Hawaii must be the top priority. I will oppose any appeal by DoD that challenges the State’s authority to regulate Red Hill operations.

In a press release after Hick’s statement, Senator Brian Schatz said, “ The DOD made a grave and unforced error that undermines public trust.  Fortunately, we have civilian oversight of the military, and this inexplicable and maddening resistance to the defuel order will not succeed.  They will lose in court, and they will lose in Congress.”

Wayne Tanaka, Sierra Club of Hawai‘i Chapter Director said in a press statement on January 31, 2022 after Hick’s announcement, “All their words about building trust and prioritizing our safety just went out the window.  This decision is clearly a move to ignore our demands that they fix this mess, and keep us in jeopardy for as long as possible. The people of Hawai‘i are not stupid, and we are not expendable.”

David Henkin, the Earthjustice attorney who represented the Sierra Club of Hawai‘i in the contested case hearing over the emergency order said, “If the Navy’s contamination of its own water system last November taught us anything, it’s that we cannot leave it up to the military to decide what is needed to protect O‘ahu’s irreplaceable drinking water supply. Thousands of families have already been displaced from their homes for months, unable to drink the water coming out of their taps, and we are all looking at water rationing this summer. We will vigorously defend the emergency order against the Navy’s foot-dragging. The Red Hill tanks need to be drained now to prevent an even greater catastrophe that poisons our entire water supply.”

Late in the afternoon on February 2, following the filing of the two lawsuits, Hawai’i State Department of Health issued a statement on the lawsuits:  “This appeal demonstrates that the Navy is unwilling to do what’s right to protect the people of Hawaii and its own service members. Despite the Navy claiming time and again that it would comply with the DOH emergency order, its actions consistently prove otherwise. We look forward to taking our fight to court to protect Hawaiʻi residents and our environment.”

Healani Sonoda-Pale, a member of the Oahu Water Protectors, said that protests in 2014 when 27,000 gallons of fuel leaked from Red Hill, “were met with the same lies, incompetence, false assurances and unaccountable behavior that the U.S. Navy is currently demonstrating during this current crisis.”

She said the group stands in solidarity with all Oahu water drinkers, calling the fuel tanks “ticking time bombs that can only be defused by defueling them.”

In previewing the DOD decision to file lawsuits, on January 31, 2022, Deputy Defense Secretary Kathleen Hicks said in a statement that the military would appeal Hawaii’s order to defuel the Navy's underground Red Hill fuel storage facility which “will afford us time to make evidence-based and transparent decisions.”

Hicks also said the military would meet Hawaii’s February 2, 2022 deadline to submit a work plan and implementation schedule for an assessment by an independent third party. Hawaii’s order says the Navy must drain the tanks, and it won’t be able to use them again until it shows that it can do so safely.  In her statement, Hicks  said the Navy still hopes to work with the state to solve the crisis and that the military continues to take actions “consistent with” Hawaii’s order to drain the tanks.

On May 6, 2021, over 1600 gallons of fuel spewed from a pipeline in the lower access tunnel and 19,000 gallons were released from one of the tanks – a situation about which very little information has been shared. That fuel allegedly made its way into a fire suppression drain line that opened up when a cart crashed into it on November 20, 2021 releasing fuel that would ultimately ended up in the Red Hill drinking water well.

It is becoming more and more apparent that jet fuel contamination of the water supply from the Navy’s wells was occurring long prior to the late November 2021 discovery of jet fuel leaking from a previously unknown emergency line.

As reported in Honolulu’s Civil Beat, as early as 2020, Navy water testing detected levels of diesel-range total petroleum hydrocarbons in the Navy’s system that exceeded state drinking water standards, according to the Navy’s most recent annual water quality report,  which was released in July, 2021.

According to the Honolulu Star-Advertiser, in July, August and September, 2021, testing showed evidence of petroleum contamination in the Red Hill well, which services the area around Pearl Harbor and included TPH-o and a family of chemicals linked to heavy oils and grease, at levels exceeding the state safety threshold. DOH said the reading was unusual compared to previous years.

In the months before residents began reporting that their water smelled like fuel, Navy test results showed indications of petroleum contamination and twice-logged readings above state safety limits for drinking water. But the Navy kept distributing water to its 93,000 customers, and the Hawaii Department of Health, charged with overseeing the delivery of safe drinking water, didn’t tell residents not to drink the water until it was too late.

Department of Health employees have said that the Navy’s water test reporting was difficult to analyze as what was provided was “raw, preliminary and incomplete” making it hard to know for certain whether a data point or trend line is valid and merits action. In a November 23, 2021 letter to the Department of Health, the Navy said that the increased rate of testing had “overwhelmed” its mainland lab and created delays in getting results.

While the current emergency order from the Hawaii State Department of Health does not call for a permanent shut down of the massive, 80-year-old Red Hill underground Jet Fuel Storage Tank system, the residents of O’ahu whose drinking water supply is jeopardized by 180 million gallons of jet fuel only 100 feet above the drinking water aquifer, certainly are demanding its closure before the predicted major catastrophic leak occurs that would contaminate permanently the entire aquifer.

Tens of thousands have written and made calls to President Biden, Secretary of Defense Austin and the Hawaii Congressional delegation demanding that the tanks be closed. They have held town hall meetings, neighborhood board meetings and signed petitions emphasizing the threat to the people of O’ahu.

The military should take very seriously the outrage of the local population over their threat to the drinking water for all the residents of the island and should withdraw its lawsuits and immediately state that it will permanently shut down the dangerous fuel tanks immediately.

About the Author:  Ann Wright served 29 years in the U.S. Army/Army Reserves and retired as a Colonel.  She was also a U.S. diplomat for 16 years and served in U.S. Embassies in Nicaragua, Grenada, Somalia, Uzbekistan, Kyrgyzstan, Sierra Leone, Micronesia, Afghanistan and Mongolia.  She resigned from the U.S. government in March 2003 in opposition to the U.S. war on Iraq.  She is the co-author of “Dissent: Voices of Conscience.”