Today was the Day of Women, Jodie's Blog from Kabul 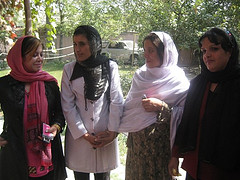 We began at the offices of the ROSE magazine. A magazine just for women that is funded by an Afghan-French woman. It covers practical life, politics and culture. The chief editor is a man because women can't do what is needed because of security and problems with the government. When we heard that we were concerned that the material would not be interesting, but we opened up to a piece on how AIDS hits women harder than men in Afghanistan and an article called "Where is the First Lady?" So Medea quit rolling her eyes.

The 4 women journalists we met were energetically the opposite of the courageous victim of war we had met the day before. She had lost everything, including one leg and was supporting her crazy and blind father but taking in sewing. But she had an energy and passion even though she said she would be happy to die, because there was no life for her. The journalists seemed to have heavy clouds on their shoulders. Najib felt it could be from all the sad stories they have to cover. He told me he had gone home very depressed last night from our meetings at the Orphanage and with the victims of war. When we asked them what was the most difficult thing about their job, their response was people making promises for interviews and not coming through for them. We had expected it to be fear of their safety. But they said they don't feel threatened because they are just "writing the truth, it is not political, so one side or the other can't get upset with their reporting." Nice idea.

None of them thought the Taliban would come back, even though they had suffered from them when they were in power. "The people are not interested in the Taliban. They thought it was ok to have the US military only if they are not killing local people. They told us most of the local people are killed by US Military all over Afghanistan and they are mostly women and children. One said she as very disappointed in that, Sara mentioned it was a rather benign word and if they were mad or angry and the reporter replied, "both." They felt the US should help train the Afghan police and army and then leave as soon as possible. Then invest in education and good training for teachers and JOBS.

They told us the same things as we have heard every where, there is too much violence against women with no justice and too much corruption in the government. The elections were a fraud and if it is not clear the people will not trust it and the government will be ineffective.

We asked who the most famous women of Afghanistan were and Malalai Joya was the top of the list. But they said, It is good to say reality, but not as extremist. So MJ's outspoken ways even scare the women journalists. We wondered what they would think of us. 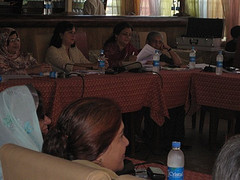 From there we went back to the women's gathering for peace with members of parliament from India, Pakistan and Afghanistan arriving just in time for tea. Medea and I split up to collect interviews in a very noisy café, I hope something of it works as they were amazing. So many courageous women, they are very passionate about bringing peace and human rights (women's rights) to Afghanistan. Some who I interviewed has been in jail, one had lead the removing of the Burka action when the Taliban were gone, another had been working for CARE in Pakistan during the Taliban time and would come across the border to help with girls education and health, she came in for the first legal Jurga and because she has to travel with a man her father had joined her. He was killed for accompanying her to the Jurga. She risks her life everyday to do her work for women.

We got a lot of the women to sign our statement to Obama not to send 40,000 more troops. These are the women leaders for peace in Afghanistan. I wonder what he is going to stay to that??? I even got Karzai's sister in law to sign it tonight. 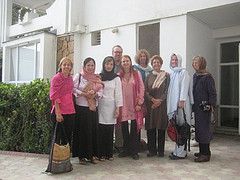 Our next meeting was with the women who had been leaders of the protest against the rape law that Karzai signed into law. They described the whole ordeal from first hearing about it, then spending 2 weeks to get a copy to read the 271 page document, finding an attorney who could read it with them and explain it, then organizing with other women's groups, doing outreach and education. They decided to target high schools because they would be most affected. One teacher took them in and let her students attend the protest. Later, after the protest the school was surrounded by thousands of an angry mob, rocks were thrown, shots fired and the house of the principle was also surrounded so many Shia women did not go home to their neighborhoods that night. At the protest in front of the Mosque of the Iman who proposed the law, they were about 200, but many were held back so when the doors of the Mosque opened thousands of screaming angry women and men poured out in protest. Our gals were surrounded by police who were finding it very hard to keep the angry mob back and it sounds like the presence of the International press was all that kept it reasonable.

Article 132 they were trying to change said, "When a husband asks wife for sexual relationship she cannot refuse." It has been changed from their action, but it is meaningless because ultimately it means the same thing, it just sounds better, and as we were told tonight, no one will protect the rights of women. "What did I think that a man who goes home and beats his wife is going to protect a woman in court who comes to complain that her husband beats her?" The new 132 reads, "As appropriate with Shia custom a women must be obedient to her husbands needs." They have a lot of work to do and are committed to growing a women's community big enough to apply pressure. Keep an eye on them, there is lots of work to do.

We asked the woman who is married what her husband thought of her activism. "He said he supported me working for my rights, but when he saw my photo on the front page of the newspaper, he asked why did I have to be in the very front of the protest."

We returned to the final statements of the women's gathering and the press conference, it was a bit depressing as nothing really was accomplished and they probably spend our annual budget to make it happen. But we collected more signatures and great interviews.

Tomorrow is our last day and we have been going from 8 in the morning until 11 or later at night, and there has been no time for shopping, so we raced to Chicken Street, the shopping street for traditional Afghan wares. Nooria was very helpful in taking us to the best stores and bargaining the best prices.

Our last supper was a delight at a private home across from the Pakistan Embassy with Ministers, business leaders, Afghan military and security company personnel. They told us what Afghanistan really needed, not 40,000 new troops but real training and real salaries for their army and police, so the US troops can go home and they can quit being an occupied country, which is not good for the people of Afghanistan.