This is a Coup 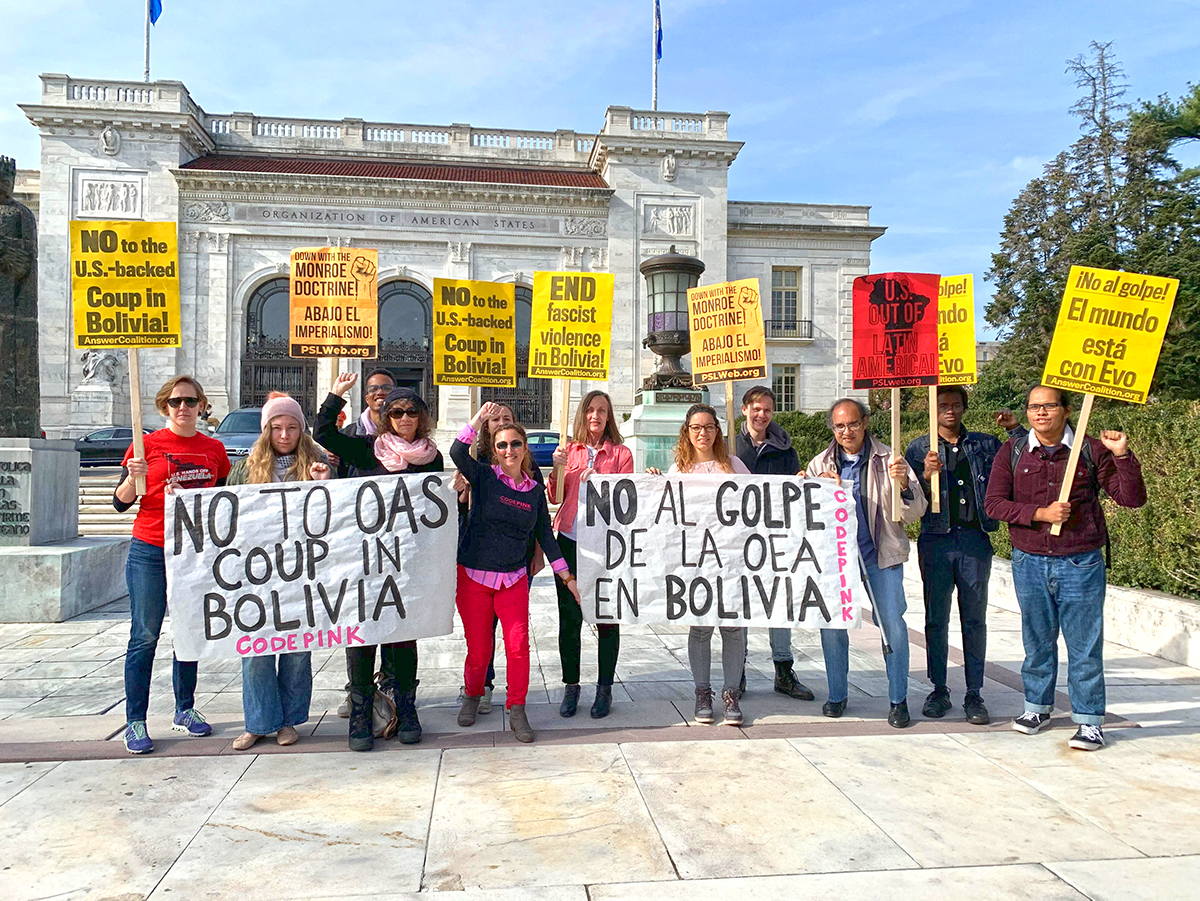 Yesterday elected Bolivian President Evo Morales, the only indigenous president ever in Latin America, resigned under duress due to a coup d’état orchestrated by a right-wing opposition and the Organization of American States, and supported by the US.* We don’t know the full role the US played, but USAID has been financing groups opposed to Evo Morales’ social and political movements since 2001 and US senators have been working directly with the opposition. Contact your senators to demand that an investigation be launched into the US’s role in the coup in Bolivia and to ask for a United Nations electoral mission to monitor a future presidential election in the country.

Bolivia has been rocked by violence for the past three weeks, as opposition protests raged under the pretext of alleged election irregularities, but in hindsight, we know it was an attempt to overthrow an elected government. On Sunday, November 10, in response to the protests and impending coup, and in an effort to stem the violence and ensure peace in the country, Morales offered to replace the members of the electoral body and hold new elections. But the gesture was immediately rebuffed by the opposition leaders, who were clearly more interested in imposing an unelected government of their own, in defiance of the will of Bolivian voters.

Contact Congress now to demand that they launch an investigation into the role the US played in the coup in Bolivia and to ask for a United Nations electoral mission to monitor a future presidential election in the country.

During the coup, protestors burned the houses of government ministers and elected officials and trashed Morales’s home. The brother of Victor Borda, the president of Bolivia’s lower house of parliament, was taken hostage — resulting in Borda’s resignation.

The role of the United States cannot be ignored. The State Department has been actively opposing Evo Morales since 2001, when it sought to weaken his political base. This was five years before he was elected president. Since that time, the United States has funded President Morales’ political adversaries, including civic groups in eastern Bolivia that attempted a coup in 2008. According to the International Federation for Human Rights, the opposition in eastern Bolivia “promoted separatism and ethnically and socially based hatred [in 2008] through the Civic Committees (Comités Civicos), in particular the Pro-Santa Cruz Civic Committee.” The current president of the Pro-Santa Cruz Civic Committee is Luis Camacho, the leading coup figure.

Contact Congress now to demand that they launch an investigation into the role the US played in the coup in Bolivia and to ask for a United Nations electoral mission to monitor a future presidential election in the country.

P.S. Watch and share our video about the situation in Bolivia. You can also listen to weekly episodes of CODEPINK Radio, where our Latin America team discussed Bolivia, Chile and more on Apple Podcasts.

*The Organization of American States was created in 1948 at a US-led summit to increase regional security, commercial cooperation, and serve as a bulwark against the spread of communism in the region.