This Friday will mark two years 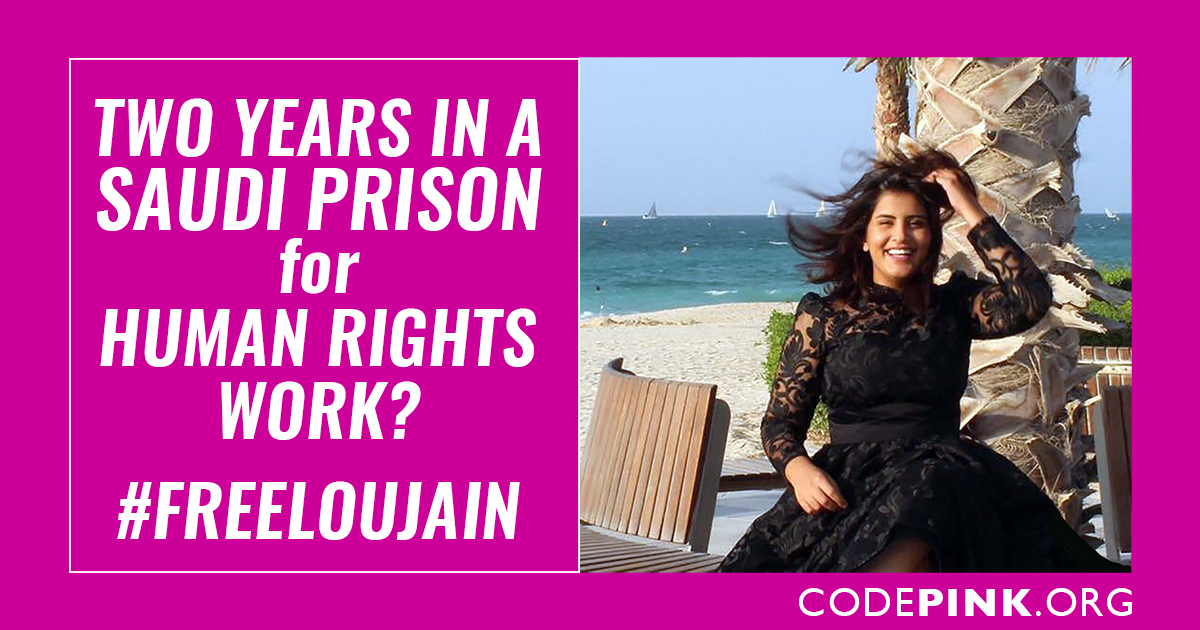 This Friday will mark two full years since Saudi women’s rights activist Loujain al-Hathloul has been in prison and we are planning a series of actions to mobilize and demand her release.

Loujain al-Hathloul gained notoriety in 2013 for campaigning against the driving ban when she posted videos of herself driving as an act of civil disobedience. She was first arrested in December 2014 when she attempted to drive from the United Arab Emirates to Saudi Arabia and spent 73 days in prison. Al-Hathloul has also been an outspoken advocate for an end to the male guardianship system that treats women as no more than children throughout their entire lives.

On May 15, 2018, a group of armed men from the state security agency raided Loujain’s house and arrested her. For the first three months of her detention, she was held incommunicado with no access to her family or a lawyer. According to the communication she was later able to have with her family, during those three months, she was beaten, waterboarded, given electric shocks, sexually harassed, and threatened with rape and murder.

Loujain was offered her freedom in exchange for denying, on video, that she was subjected to torture, but she refused.

The fact that MbS lifted the driving ban and simultaneously put in prison those, including Loujain, who had campaigned and suffered for such reforms makes clear his actual motive: to silence dissent and prevent these women’s voices from being heard.

Join us in calling on women members of Congress — Senators like Elizabeth Warren, Kirsten Gilibrand, Susan Collins, and Jean Shaheen, who are all cosponsors of S.Res.73 calling for Loujain’s release, and Reps. like Susan Wild and Chellie Pingree, who both nominated Loujain for a Nobel prize in 2019, as well as feminist champions in Congress like Alexandria Ocasio-Cortez, Pramilla Jayapal and Ayanna Pressley— to raise their voices for Loujain. Non-U.S. residents, use this link instead.

Loujain’s sister Lina al-Hathloul says that the regime arrested these women’s rights activists “so that they make the [Saudi] people understand that change only comes top down.” Help us send them a message in response that change comes from the people of the world and we say 🗣️🗣️🗣️ #FreeLoujain!

📢 Tell women members of Congress to speak out!

In solidarity with Loujain and all Saudi women,