The dangerous ministry of truth telling... 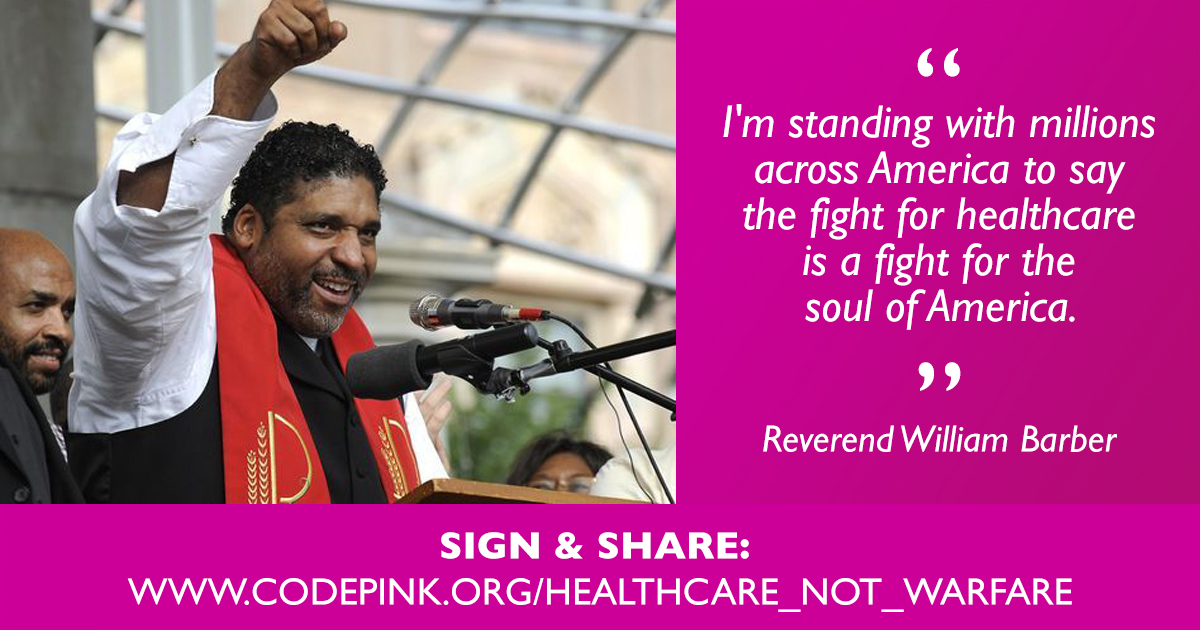 At a moment when our government is trying to take away our healthcare while pushing for a massive increase in Pentagon funding, we need to listen to one of the most powerful moral voices of our time: Reverend William Barber.

Arrested last week in Senate Majority Leader Mitch McConnell’s office to protest the repeal of Obamacare, the Reverend said: “There are times when silence is no longer an option and you must engage in the dangerous ministry of truth telling. I'm standing with millions across America today to say the fight for healthcare is a fight for the soul of America.”

The Reverend rails against politicians who want to “steal from the poor to give budget increases to a bloated military” and instead calls for Healthcare, Not Warfare.

Join with Reverend Barber in telling your elected representatives: Healthcare, Not Warfare!

“What will make us safer,” Rev. Barber asks, “$54 billion dollars more to a war machine or jobs, education, healthcare, and infrastructure? $54 billion could provide healthcare to 22 million low-income children. What would make fewer people around the world hate us—lifting up the world or bombing and invading? It’s not that we don’t have the money, it’s that our moral priorities are wrong.”

The Reverend says that instead of feeding the bloated Pentagon, we should be feeding hungry children. Instead of talking about repealing the Affordable Care Act, we should be talking about how to move to universal healthcare. “We have to be clear: Healthcare is a human right. Period,” he said.

Tell your representatives: Healthcare, Not Warfare!

The Reverend’s call to action is prophetic: We must combat systemic poverty and racism, war mongering, economic injustice, voter suppression, and other attacks on the most vulnerable. We need a long term, sustained movement led by the people who are directly impacted by this extremism.

Let us take inspiration from his leadership, his actions and his words.