The bullets expand upon impact 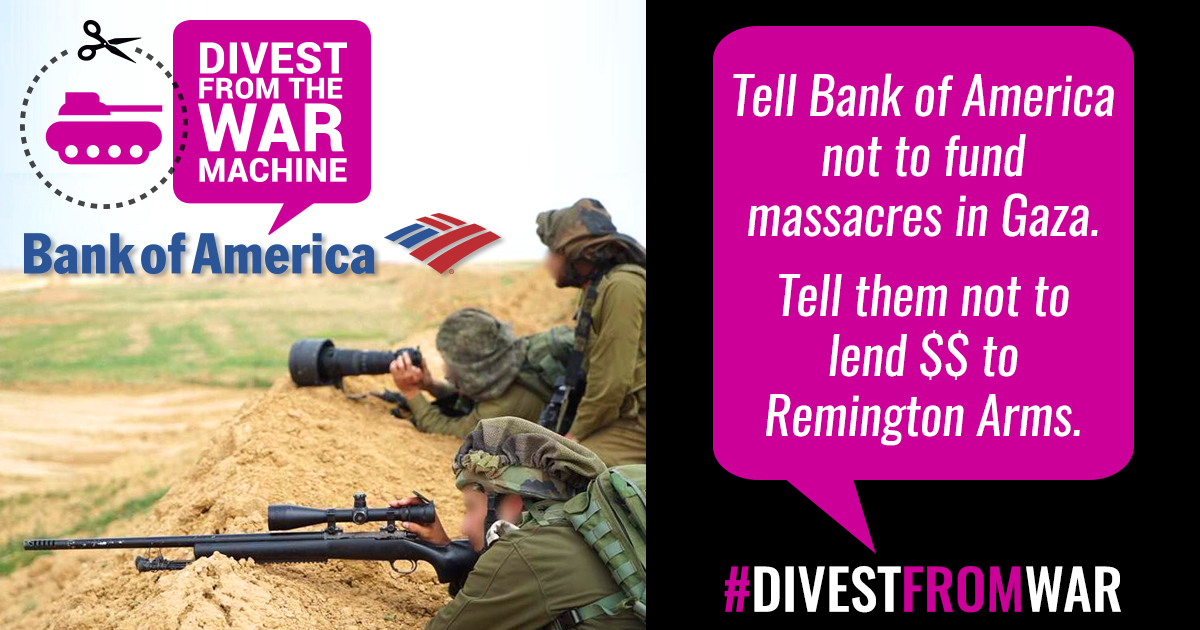 Over the past 40 days, over 40 Palestinian protesters in Gaza have been killed by Israeli snipers. Thousands have been injured. According to Amnesty International, the two types of weapons being used to shoot at protesters have been the Israeli-made Tavor rifle and the US-manufactured Remington M24 rifle. The Remington M24 uses 7.62mm bullets that expand inside the body, causing gross injuries.

Bank of America recently pledged to help stop mass shootings by no longer financing companies that manufacture military-style firearms for civilian use. But they are still planning a large loan to Remington. Along with the M24 sniper rifle, Remington also manufacturers the Bushmaster rifle, which was used to kill 20 first-grade children and six school employees in the Sandy Hook shooting.

Tell Bank of America to cancel their loan to Remington Outdoor Co. For the sake of peaceful protesters in Gaza and far too many lives lost in the US, BofA should follow through with their pledge help end mass shootings.

The protests in Gaza are in commemoration of the Nakba (catastrophe) in 1948, when 750,000 Palestinians were expelled from their homes inside what is now the state of Israel. 70% of Palestinians in Gaza are refugees from that expulsion. They are protesting for their freedom and the right to return to their homes.

Learn more about the Nakba of 1948 and how it is continuing today in this special edition of Moving Forward. Then, join us in telling Bank of America not to finance a weapons company that manufactures arms used on unarmed civilians in the US and peaceful protesters in Gaza.

Next week, on May 15, the protests in Gaza will culminate with a big march at the border fence. If the lethal force Israel has been using since March 30 is any indication, that day may be a bloodbath. We at CODEPINK are preparing to be in the streets and in the halls of Congress to demand condemnation of Israel’s actions. You can find a list of local events on and around May 15 in solidarity with Palestinian rights here.

Towards peace and justice,
Ariel Gold and everyone at CODEPINK