Rod Stewart: Thank You for Cancelling Your Concert in Saudi Arabia! 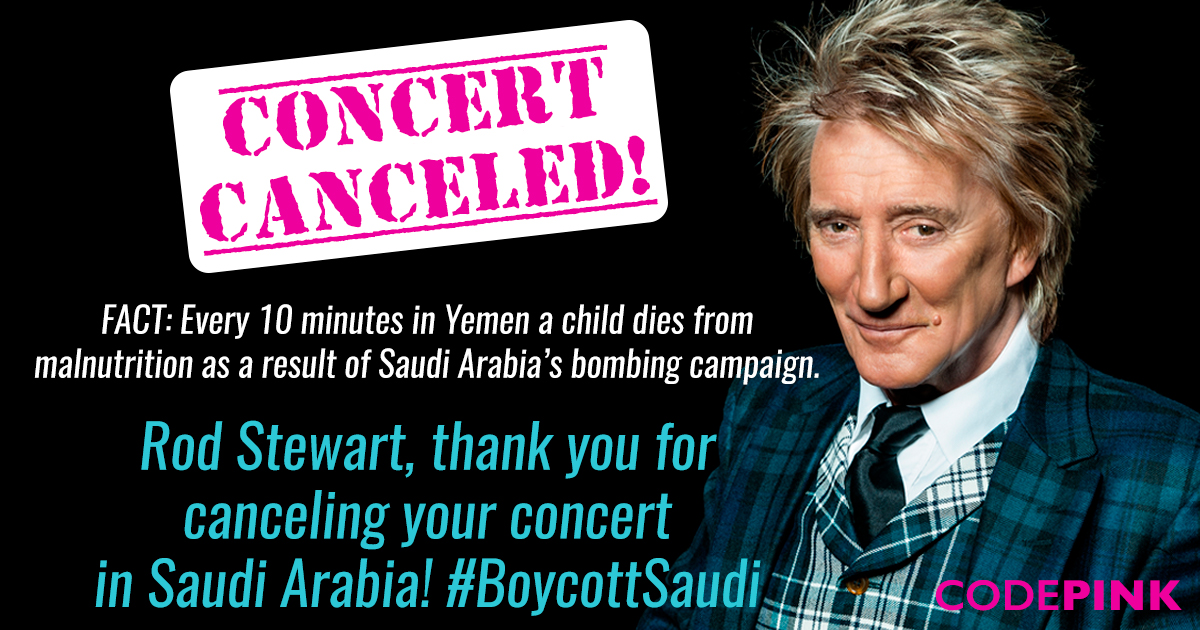 Rod Stewart is one of the best selling artists of all time so we were immensely disappointed to see that he was planning to perform January 23-25, 2020 at the Winter at Tantora festival in repressive murderous Saudi Arabia.  On October 19, 2019, we started a petition and social media campaign asking him to cancel and around two weeks later when we looked at the Winter at Tantora festival webpage, the place were it had stated that he would be performing replaced by a stock photo of a stage labeled “To Be Revealed Soon.”

Thank you for canceling your concert at the Tantora cultural festival in Al Ula, Saudi Arabia. We appreciate your choice of human rights rather than artwashing Saudi war crimes and human rights abuses.

When we appealed to you earlier this month as a supporter of the Red Cross, we hoped you understood and believed in their mission to provide relief to victims of war and prevent suffering. It is clear from your actions that you do.

Thank you for stepping up and telling the world that war crimes, gender segregation, and torture are unacceptable. Saudi Arabia is using the Winter at Tantora festival to try and distract from the fact that they are one of the world’s most repressive, misogynist, gender-segregated countries in the world. Saudi Arabia subjects women to the oppressive male guardianship system, in which all Saudi women need permission from a male to travel, study, obtain a passport, and marry. Saudi women activists are right now languishing in prison, subjected to horrific beatings, electroshock, and sexual harassment as punishment for their activism. Saudi is the cause of the worst humanitarian crisis on earth: the war in Yemen. Since 2015, 85,000 children under the age of five have died from acute malnutrition as a result of the war.

Thank you for freedom and human rights.