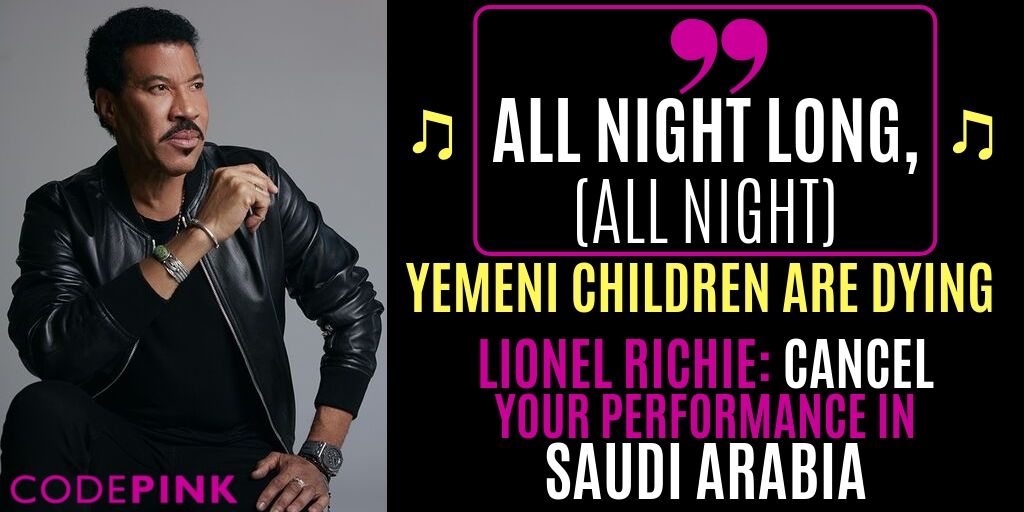 Lionel Richie was one of the most beloved musical artists on the planet. In the 1980s, he charmed the world with such hits as such as “Endless Love” (with Diana Ross), “Say You, Say Me,” “All Night Long (All Night),” and “Dancing on the Ceiling.” But last month — despite calls for him to cancel — he performed in Apartheid Israel and now, on February 28, 2020, he is scheduled to perform in Saudi Arabia.

Add your name to our letter asking Lionel Richie to stop crossing picket lines and cancel his February 2020 concert at the Tantora festival in Saudi Arabia.

We appeal to you to cancel your February 28, 2020 concert at the Tantora cultural festival in Al Ula, Saudi Arabia.

Not only does Saudi Arabia not allow LBGTQ+ individuals and women the basic rights of self-expression — less than six months ago, Saudi Arabia executed five men for “crime” homosexuality after exacting confessions from them through torture — but since 2015, Saudi Arabia has been waging a war on Yemen so brutal that around 85,000 children under the age of five have died of hunger and more continue to perish every day. According to the UN, every 10 minutes a Yemeni child dies from war and hunger.

Though Saudi women have recently seen a small increase basic rights as they were granted the right to drive in 2018, the very women who campaigned for this right in Saudi Arabiahave since been arrested, imprisoned, and tortured through electroshock, beatings, sexual harassment, and waterboarding. On August 1, 2019, Saudi Arabia announced that they would be doing away with part of their oppressive male guardianship system, finally allowing women to travel without permission from a male relative, but Saudi women still have to get the permission of their male guardian to marry or divorce and they still face state-sponsored misogyny and gender-segregation.

We hope you will follow Nicki Minaj’s lead and cancel your show for the sake of Yemeni children, the LGBTQ community, Saudi women, journalists, and anyone seeking to love their partners and speak for themselves.

This past summer, we appealed to you to cancel your September 12 concert in Tel Aviv in accordance with the call to boycott Israel until Palestinians have freedom and equality. Unfortunately, you chose to cross the picket line and go ahead with that performance. We hope this time,for the sake of Yemeni children, Saudi women, queer Saudis, dissidents and journalists — including justice for Jamal Khashoggi —, you will decide to follow Nicki’s Minaj’s lead and cancel your February 28 concert at the Tantora festival in Saudi Arabia.