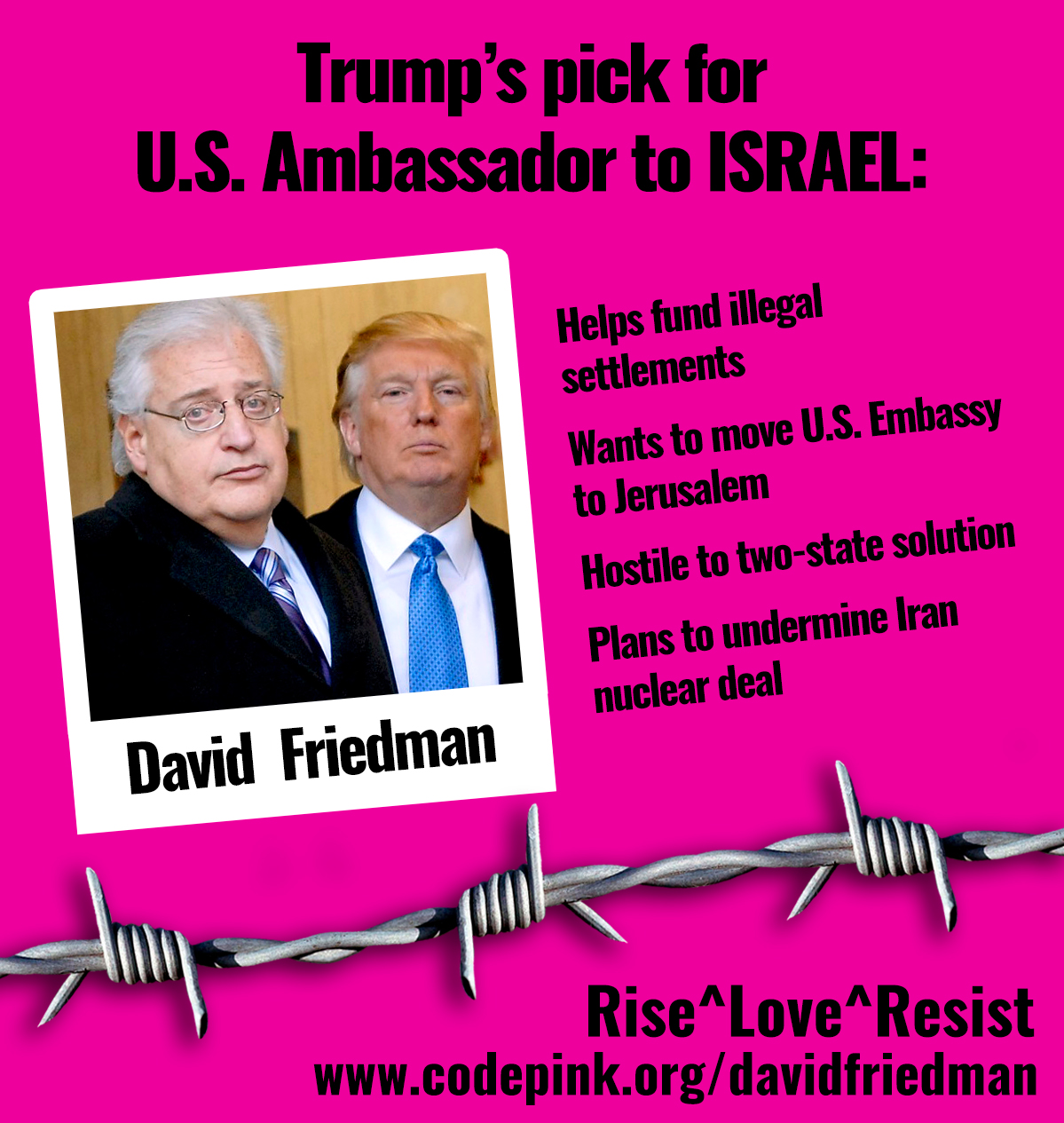 Last Thursday, David Friedman received only a two-vote margin of approval from the Senate Committee on Foreign Relations to move forward as the nominee for US ambassador to Israel. Though we were not able to block him, our success in making it a close vote showed our strength to mobilize against the pro-settlement, extreme right-wing policies that Friedman represents

Now is the time for us to ramp up our efforts. Democratic minority leader Senator Chuck Schumer has the power not only to vote against Friedman personally, but hold a floor debate prior to the full Senate vote on Friedman’s  appointment.

CODEPINK’s Middle East Campaign Director Ariel Gold, who just returned from three weeks in the West Bank, stood up to protest Friedman at the Senate Committee on Foreign Relations hearing last Thursday.“The people in Palestine and Israel know that Friedman is dangerous for peace.” said Ariel. He represents the growth of settlements, an escalation of violence, and the demise of hope. He has no diplomatic experience and is unfit to be US ambassador to Israel.”

Post the image at the top of this page to your social media accounts. Help spread the word that we need a peace maker, not a settlement builder,for US ambassador to Israel!

The nine votes against Friedman were accomplished thanks to tens of thousands of grassroots activists calling, emailing, and lobbying. Next, the full Senate will vote. This is our last chance to stop such a right-wing extremist from becoming  US ambassador to Israel. Call Chuck Schumer (212) 486-4430 and tell him to vote no on Friedman and hold a floor debate!

Contact your Senators. Tell them to vote no on Friedman!

Friedman’s ties to, and raising of millions of dollars for, the ideological settlement of Bet El show his support for the most extreme elements of Israel's settler movement. As ambassador, Friedman will frame the perceptions the White House receives of situation in Palestine and Israel. As Senator Dianne Feinstein stated, “his confirmation would only fan the flames of the Israeli-Palestinian conflict. It essential that we do everything in our power to stop him from being confirmed."

Towards a better world,

P.S. Join us in D.C. March 26-28 to protest the American Israel Public Affairs Committee (AIPAC) at their annual convention. AIPAC supports settlements. They lobby shamelessly for uncritical US financial and diplomatic support for Israel and want to undo the Iran nuclear deal.