🛑 Tell the Biden admin: no new U.S. military base at Okinawa! 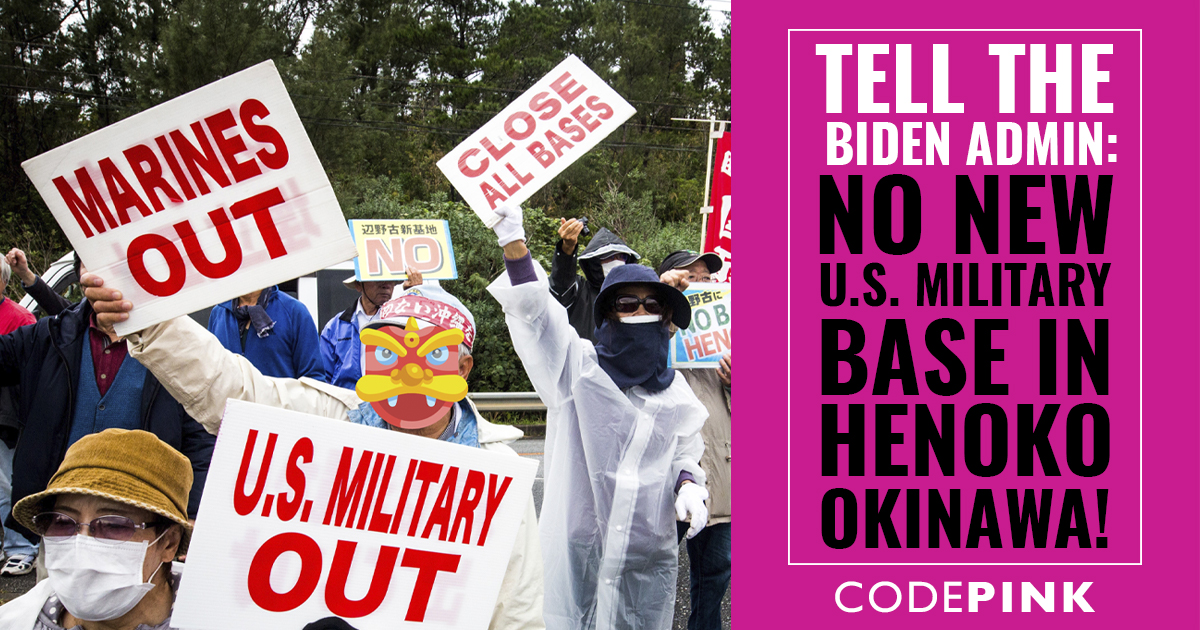 The United States is currently building a dangerous and environmentally destructive new Marine base in Henoko, Okinawa against the will of the Indigenous Luchuan (Okinawan) people. While the U.S. criticizes China for its treatment of ethnic minorities, it continues its long legacy of colonial oppression of Indigenous Luchuans, who have been cruelly traded back and forth between the Japanese and American empires for over a century.

In an escalation of military aggression in the Western Pacific toward China, the U.S. Marine Corps has been conducting simulated military exercises, which endanger civilians and the environment, in Okinawa with increasing regularity; China has previously condemned U.S. and Japanese drills in the region, naming them as provocations. We need the Biden administration to halt the U.S.’s unjustified escalation of war in the Pacific against China by first ending the construction of a new military base in Henoko.

Send a letter or tweet to President Biden, Defense Secretary Austin, and Sec. of the Interior Deb Haaland demanding an immediate stop to the construction of a U.S. military base in Henoko, Okinawa.

Environmental destruction: Not only is the base structurally unsound, it will also wreak havoc on the marine life and environment around it. In order to construct the base, the U.S. and Japan are filling in Oura Bay, which contains an ancient coral reef filled with hundreds of rare and endangered species (including the sacred Okinawan dugong), with concrete blocks. Luchuans have long cared for the environment in a sustainable way, though the ongoing U.S. and Japanese occupation of Luchu continues to cause tremendous environmental harm, including the poisoning of drinking water and environmental damage from U.S. chemical and biological weapons.

Desecration of the dead: To make matters worse, the soil being used to build the base in Henoko is believed to contain the remains of Uchinaanchu (Indigenous Okinawan) civilians and Japanese, American, Uchinaanchu, and Korean soldiers (the latter two were forcibly conscripted to fight for imperial Japan), all of whom died in the 1945 Battle of Okinawa. The Battle of Okinawa was one of the bloodiest battles of the Pacific war that resulted in the death of more than a quarter of Okinawa’s civilian population. The remains of an estimated 2,800 victims still remain buried, according to the Okinawan prefectural government. Continuing with the construction of this base would be an affront to the dignity and memory of those who died in this battle.

Violation of Indigenous rights: Indigenous Luchuan sovereignty is continually violated by U.S. and Japanese military occupation, and Luchuans are treated as second-class citizens by both colonizing nations. Yet Luchuans are recognized by the United Nations and many other organizations and scholars as the Indigenous peoples of the Luchu Island; archeologists believe Luchuans have inhabited Luchu for at least 32,000 years. During the nineteenth century, Luchu became internationally recognized as an independent country by Western powers. In 1879, Japan illegally annexed Luchu against the will of Luchuans in its first colonial acquisition. After World War II, Japan's other colonies regained their independence while the U.S. military decided to keep Luchu for itself to use for military bases. During World War II Japan intentionally placed an inordinate amount of military presence on Uchinaa (Okinawa) Island with the intent of sacrificing Uchinaanchu (Indigenous Okinawans) in order to protect the Japanese homeland. In 1972, after 27 years of Luchuan protest against U.S. military rule, the U.S. "gave" Luchu to Japan without a vote from Luchuans, and today Luchu remains under de facto joint U.S. and Japanese control.

The Native Luchuan people have never willingly agreed to join the U.S. or Japan, and are daily subject to major human rights violations.

Human rights abuses & military sex crimes: Furthermore, the U.S. military presence in Luchu also directly harms Luchuans via accidents, economic deprivation, and violent military crime, particularly sexual abuses against women and children. Between 1972 and 2016 alone, there were 5,919 criminal arrests of U.S. military personnel in Okinawa, including 1,067 violent offenses and 576 felonious offenses. Many of these offenses include the murder, rape, abduction, and assault of local women and children by U.S. servicemen, and these crimes are often committed with impunity.

Send a message to the Biden administration asking them to end the construction of the U.S. military base in Henoko, Okinawa!

U.S.-led military aggression toward China, including and especially the construction of the new military base in Henoko, wreaks havoc on the environment, violates human rights, oppresses Indigenous Luchuans, and desecrates the dignity of war victims. China Is Not Our Enemy! U.S. out of the Pacific!

Toward peace in the Pacific,

P.S. Don't forget to join us on Sunday April 18th at 1 PM PT for a China Is Not Our Enemy webinar, Dragon Ladies, Sex, Nuclear, Weapons, and Death, to hear three Asian American organizers discuss the interconnections between the fetishization of Asian women, racialized violence, and U.S. imperialism.