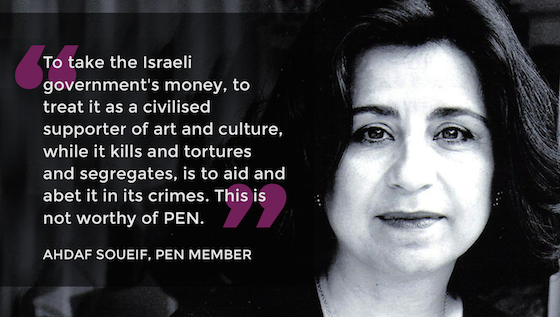 The PEN American Center describes itself as “the U.S. branch of the world’s leading international literary and human rights organization,” and PEN does great work championing writers’ rights around the globe. Unfortunately, the PEN American Center has chosen to partner with the Israeli government for its upcoming World Voices Festival, and had listed the Israeli Embassy as a “Champion” of the festival.

The PEN World Voices Festival is a major literary event, bringing together important writers from across the country and around the globe for panels, lectures, discussions, and workshops in New York City. How can the PEN American Center partner with a government that regularly violates the rights of Palestinian writers and journalists? Palestinian writers suffer from Israeli government repression, including denial of freedom of movement, and regular harassment and intimidation. Two Palestinian-American women novelists and friends of CODEPINK  were recently denied entry to Israel because of their advocacy for Palestinian rights. Both of them were banned from Israel for ten years, which means they are unable to visit their relatives in the Occupied West Bank.

Over 135 writers—award-winning authors, poets, journalists, translators, and public intellectuals, including Angela Davis, Junot Díaz, Louise Erdrich, Richard Ford, Alice Walker and Cornel West—and 13 organizations, including CODEPINK, have come together to ask PEN to reject support from the Israeli government. As our friend Ahdaf Soueif has said, taking money from the Israeli government is not worthy of PEN.

Join us in standing with writers, journalists, cultural workers, and Palestinian civil society in calling on PEN to refuse sponsorship from the Israeli government. Take action today to support dignity, equality, and justice.

Together through the boycott, divestment, and sanctions movement we can help bring justice and equality to Palestine.