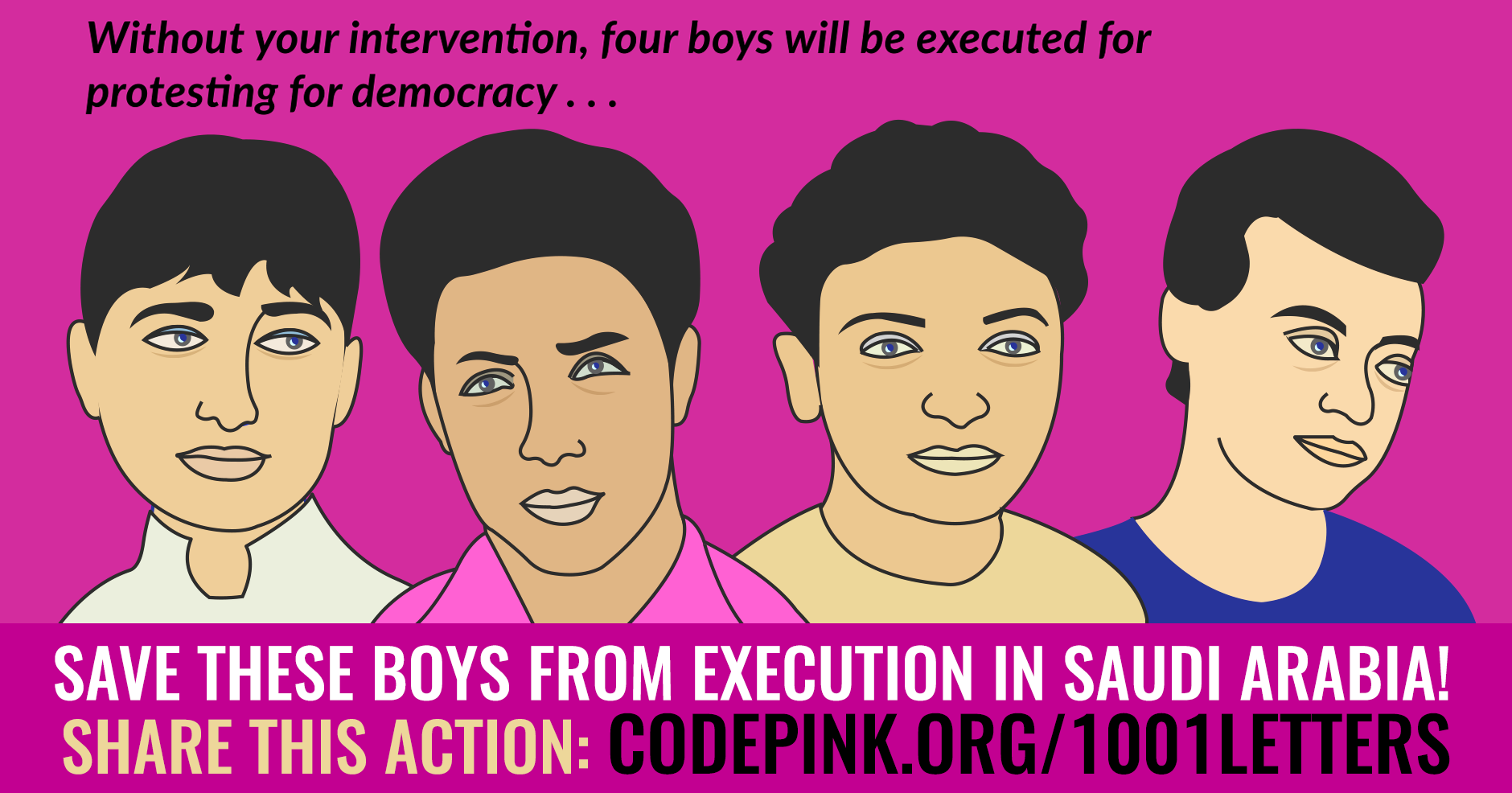 Saudi Arabia has one of the worst human rights records in the world. In complete violation of international law, since its inception, the country routinely imprisons and executes hundreds of people every year for all types of crimes. For the past decade, the calculated cruelty has only increased, in the name national security and terrorism to deter any public dissent.  According to the London-based human rights group Reprieve, many of the executions are for expressing public dissent.

Under these draconian measures, four teenagers find themselves on death row for the “crime” of protesting for democracy.

Ali Mohammed Al Nimr was 16 when he allegedly participated in a pro-democracy rally. He was forced by torture to confess to crimes he did not commit. Despite having a trial, he lacked access to his lawyer and the evidence against him. It is as if the outcome of the trial was predetermined.  Judges in all stages of the court sentenced young Ali Mohammed Al Nimr to death by beheading and crucifixion, which was confirmed by appeals.

Ali’s family is still hopeful that he may be saved from this horrific sentence. His father wants to see him ride his bike again; it remains in their home, the same bike Ali was riding when the Saudi police rammed into him and arrested him. His mother wants to hear his laugh again. Ali himself wants to become a lawyer so he can help people in similar unjust situations.

Abdullah Al Zaher was only 15 years old. The Saudi Authorities gruesomely shot at him, and then apprehended him. He, too, was forced to confess after months of torture and given the death sentence based on dubious trials with predetermined outcomes.   Abdullah’s family is heartbroken.  Abdullah loved riding his horse, and his favorite horse, Jemol, is still waiting for him.

Dawoud Al Marhoon was 17 years old. Originally, the Saudi authorities did not plan on executing Dawoud. Instead, they asked the boy to spy on his own friends and family to find other dissidents.  Dawoud refused to do so, and in retaliation, they sentenced him to death.  Even after his death sentence was confirmed, Dawoud’s only concern was his mother, and he even joked with her to keep her spirits up.

Mujtaba Al Suweikat was 17 years old.  He had been accepted into Western Michigan University to study finance.  At the airport, before he was to leave for the U.S., the Saudi authorities grabbed him, tortured him, and after an unfair trial sentenced him to death for participating in peaceful protests.   Mujtaba loved acting and acted in many independent films. One of his last films is called “Hope.”

Mujtaba’s case shows the deleterious effects of the global war on terror.   In the wake of 9/11, the US government enacted sweeping measures that included the establishment of the NSA spying regime, and unprecedented powers of the U.S. government to collect data on various individuals.  But a  seldom mentioned measure was the global cooperation with various US partners, such as Saudi Arabia, to apprehend terrorists.  This has allowed the Saudis to arrest young men like Mujtaba on the pretext of terrorism. In the State department website, the U.S. government boasts: “As a result of U.S. security assistance, the Kingdom has foiled numerous terrorist attempts against Saudi and foreign targets.”

In April of 2015, the Saudi government expanded the concept of terrorism.The new legislation - which uses a broad definition of "terrorism" that includes any act intended to insult the reputation of the state, harm public order or destabilize the security of society - is a threat to freedom of speech and thought in the kingdom.

"The law allows people in power to crackdown on anyone," wrote Sara Hashash, the Middle East and North Africa press officer at Amnesty International. "The recent crackdown in the kingdom is targeting civil and political associations and human rights organizations. Lots of people are prisoners of conscience, and they are detained forcefully for simply stating their opinions."

Gerald Staberock, secretary general of the World Organisation Against Torture, said, "The problem in Saudi Arabia is that the judicial system is used as a tool against those who want more freedom. In Saudi Arabia, there is the so-called 'religious police,' whose role is to find human rights advocates and freedom fighters and punish them. And then there are high courts, which do not function like in Western countries: They are not in charge of guaranteeing the protection of rights, but making sure that punishments are carried out. There are also reports stating that many people who are imprisoned, often without being charged, are also tortured as the scope is to humiliate them and make them suffer. Inmates are also tortured because the Saudi Arabian legal system is based on confessions. This is a gross violation of international standards, considering the fact that Saudi Arabia voluntarily subscribed to the UN convention against torture."

In the case of Mujtaba Al Suweikat, there is evidence that the United Kingdom played a role in helping apprehend him.  Sadly, there may be no way to know how much information was shared with the Saudi authorities and how many political dissidents were targeted by the Saudi authorities with the full cooperation from the U.S. government.

At this point, the only hope for these young boys is for the enough public outcry to convince the king to grant these four individuals clemency.  We as American citizens have a responsibility not only as citizens of the world, but also because of our government’s role in enabling this.