Speak Up! Stop the Hostage Crisis in Washington 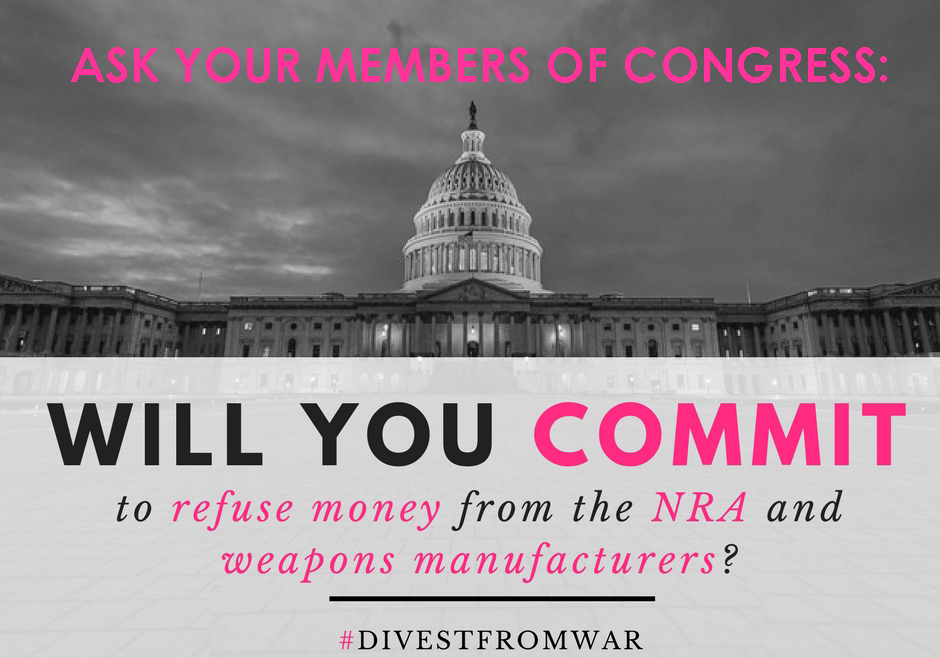 Our government is being held hostage. Campaign contributions from weapons manufacturers control Washington. The proof is in our federal budget, which is dominated by militarized spending. In 2017, Congress gave more than $700 billion to the Pentagon, and more than half of that went straight to military contractors and weapons manufacturers. At the same time, education, diplomacy, and infrastructure budgets were slashed.

Tell your Senators and Representative to refuse campaign contributions from major weapons manufacturers and the NRA. Washington is making a killing on killing, and it’s time to say no!

Congress makes critical decisions on issues related to national security and defense, from budget priorities to the use of military force. These decisions must be based on national security and moral principles, not on outside influences. Taking contributions from weapons companies constitutes a conflict of interest and keeps us in a state of perpetual war.

Weapons manufacturers cannot be allowed to control military budgets and foreign policy decisions because of donations they make to congressional campaigns.

Congress needs to hear from you. Our representatives need to make decisions that benefit our communities, not corporate coffers. Join us in calling on Washington to divest from war and violence. Join with your friends and neighbors in holding your Congressional representatives accountable.

Thank you for speaking up and speaking out against making a profit from war!