Social Formations: Getting down, dirty, and deep for justice in Detroit

Reflections on the 2010 US Social Forum from a Pinker

Whew!  What an action-packed week it's been!  I'm sitting at my friend's kitchen table in Madison, Wisconsin and I think it's the first time I've sat still in days. Sounds of protest songs, phone ringing, and bike tread to the asphalt are replaced here by finches, the breeze dancing with tree branches, someone playing reggae.  Uploading photos and reviewing video footage from the US Social Forum (USSF) this past week, I realize just how much we did in Detroit in one short week (was it really only eight days ago that I arrived in the midwest?!).  From burying a hulking Hummer to learning, listening, and engaging in the US Social Forum workshops to taking part in actions, creating a pink lemonade stand, demolishing a building, cofacilitating People's Movement Assemblies, getting Tighe Barry out of jail (and many of us almost going to jail) in Canada, dancing through the night and being busy throughout the day, we had a very full, hot pink week in Motor City! 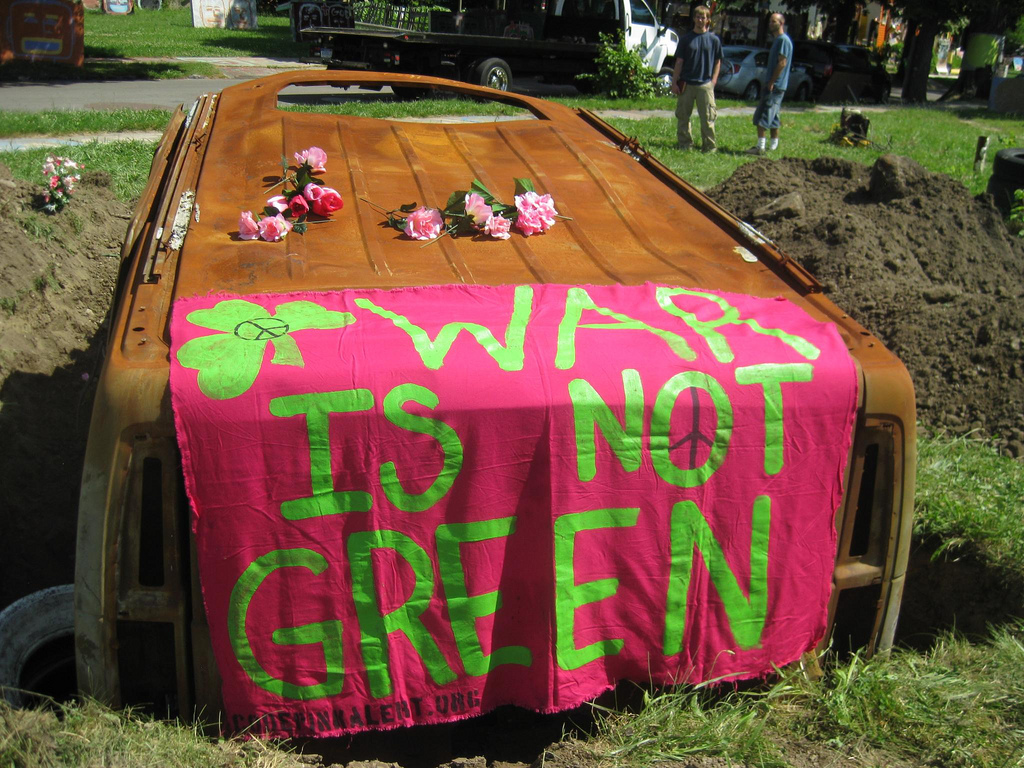 Monday, we buried a Hummer on the wildly artistic street that is home to the Heidelberg Project, a symbol of hope and revitalization in a city devastated by economic downturn.

The Hummer was the symbol of a macho, gas-guzzling, war-glorifying era that is thankfully came to an end one month ago when the Hummer went out of business.  My generation has been asked to kill and die for oil in Iraq--soldiers dying in their Humvees so Americans can go joy-riding in their Hummers. By burying the Hummer, we were saying, "No more wars for oil, we want a green, peaceful future." Read more about why - and how - we buried the Hummer in Medea's excellent blog.

To bury a Hummer we harvested one burned out hummer body from a salvage yard, three cans of remnant pink house paint, a truck load of flowers, ferns, and a tree, fake flowers, a bicycle, a stack of tires to line the grave, a tractor with a backhoe, and a truck hood for the tombstone.  The burial project took all day to complete and was a sight to behold.  While I had worked for months to help make the vision a reality, seeing the artist, Tighe Barry, bring all the elements together and orchestrating the transformation of the Hummer from war machine carcass to flower pot was a breathtaking sight to behold (and believe me after shoveling dirt and painting in the hot sun we were out of breath!).

I can't imagine a better space for the Hummer to be buried, and while we were finishing up the final details, dozens of people stopped by to say thanks for creating this vision and for the inspiration.  This will be a lasting art piece that will be seen by people from all over the world who come to visit the Heidelberg Project.  Janine Guyton, who co-directs the project with her husband and visionary artist Tyree Guyton, told us that she and Tyree love the piece and plan to keep it there indefinitely, perhaps even when they break ground on their recycled art building a year from now.  And the Hummer's funeral made the news. Hear Medea speaking about the burial on Free Speech News here and here and see footage of the burial here.

The Hummer Burial absolutely would not have happened without the artistic vision, determination, of artivist Tighe Barry, or without Medea Benjamin's original idea to bury the Hummer.  We are grateful to our partnerships and new friendships with Tyree and Janine at the Heidelberg Project and with John George and the team at Motor City Blight Busters, who brought butterflies to decorate the art installation space.

On Tuesday morning we worked with the Motor City Blight Busters to help demolish an abandoned home and saw the incredible work Blight Busters is doing to rebuild a neighborhood ravaged by drugs, violence and unemployment.  It now has a community garden, new homes, a jazz and poetry club called the Artists Village, a community center, and more.  Young folks are actively engaged in all the projects.  We returned to this neighborhood on Saturday night to celebrate the birthday of Blight Bustsers founder John George and had the opportunity to award John a pink badge of courage for he and his partners' work in the community.

Tuesday afternoon we marched in the opening day USSF march and created a lemonade stand on the corner of Grand Circus Park to hand out hundreds of cups of pink lemonade to marchers who were thirsty for justice... and a cold beverage ('cause Detroit is HOT!).  The march was beautiful with many big puppets, giant sunflowers, awesome chants and cheers, and upeat energy in the heat of the Detroit streets.  By nightfall we had a house packed with CODEPINKers from all over the country.

Wednesday was the first full day of workshops and our CODEPINK workshop was during the first slot this morning.  It was called "Beyond Petroleum" and focused on transforming the war economy into a greener and more peaceful society step by step.  We gave presentations on burying the Hummer, keeping Northrop Grumman out of DC, responding to the BP oil gusher, protesting robotic warfare and drones.  Nancy Mancias, Susan Harman, and Terrie Hempel (W. MI CP Coordinator) facilitated a teach-in on accountabiliy complete with a how-to arrest a war criminal demo.  They awarded certificates to those in attendance, certifying that they were ready to make a citizens arrest when necessary in the name of justice and human rights.

The Pro-Occupation of Palestine group, Stand with Us, tried to have a workshop at the US Social Forum but it was canceled when discovered.  It was an attempt to pinkwash the forum - focused on LGBTQ rights in the Middle East.

Thursday was packed with anti-war and Palestine track workshops. Medea Benjamin spoke at the anti-war People's Movement Assembly and at a workshop on lifting the siege of Gaza. I spoke on a morning panel about Jewish stories toward justice in Palestine and Israel with Jewish Voice for Peace (listen to parts one, two, and three), and in the afternoon cofacilitated a workshop with Adalah-NY on consumer boycotts to pressure Israel to end the occupation.

CODEPINK's Nancy Mancias was on a panel on robotic warfare and spoke on accountability as well. Throughout each day of the forum, CODEPINKers joined in workshops and discussions on topics from immigration reform to environmental justice to demilitarizing our communities to grounding drones. I asked each person I met how the Social Forum was going for them and most everyone replied that they were overwhelmed by all the programming choices, and felt that the multiple locations for events and lack of easy transportation made it difficult to participate in programming that was not central to the forum. A great deal of funds (I imagine) were invested in large tents for outdoor tabling that were not easily accessible from the central Cobo Hall and were thus never used. I concluded that less programming in a more central place with more encouragement to get to know each other (greeters, mixers/ice breakers, etc.) would be more logistically manageable and would foster more movement cross-pollination. Nevertheless orchestrating this epic gathering of social movements was no small feat and the organizers did an incredible job!

On Thursday evening many in our delegation visited the Al-Nakba photo exhibit at a local church and witnessed black and white photos documenting the destruction of Palestinian villages and lives, and also highlighting Palestinian and international nonviolent resistance to the occupation.

Friday morning PINKs joined in a mass action to protest big banks and home foreclosures.
We took part in the Boycott, Divestment and Sanctions People's Movement Assembly, and I spoke about CODEPINK's Ahava boycott with a group who presented on consumer boycotts. This People's Movement Assembly drew a couple hundred people over four hours to engage in next steps on building a movement to apply economic pressure on Israel. Our Ahava boycott was applauded for the many successes over such a short time (while in Detroit, we celebrated the one year anniversary since we launched the campaign by shutting down the Ahava store in Tel Aviv).

Friday evening we gathered for a delicious Ethiopian buffet and then danced the night away at the Leftist Lounge, the largest USSF people's party, complete with hip hop, djs, and powerful live performances from our friends Climbing Poetree and Seasunz. 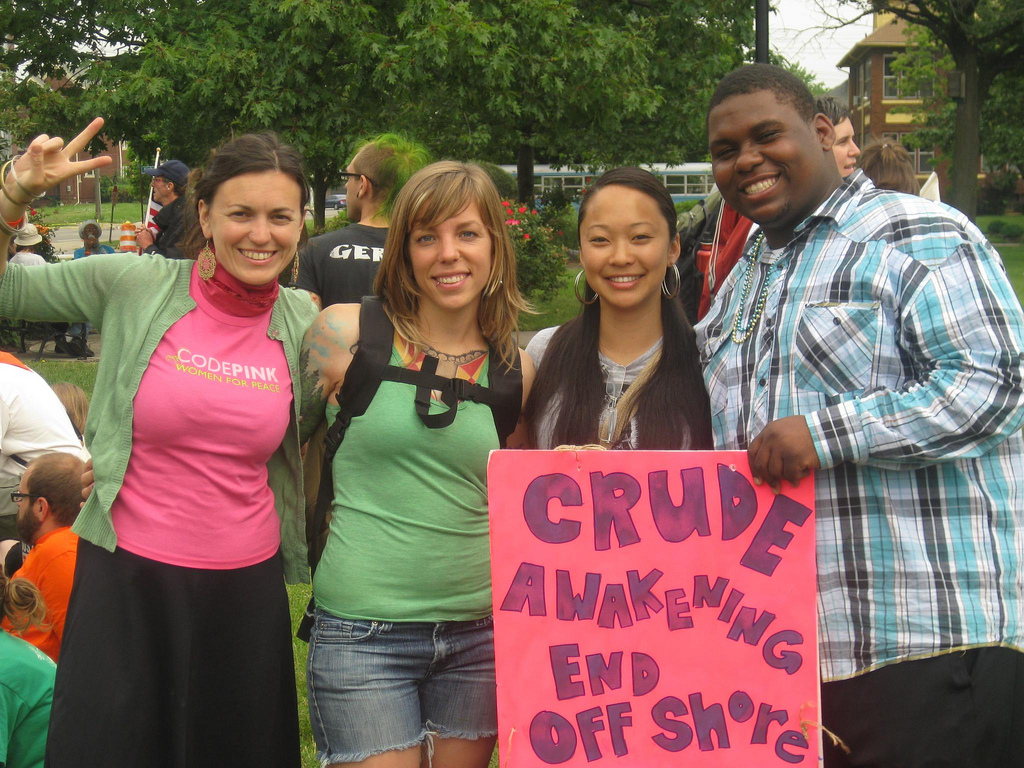 Saturday morning we joined in a mass direct action to protest the Detroit incinerator, a hulking polluter, and to call for clean air, good jobs and justice for all. We rode bikes, carried giant sunflowers, wore our Boycott BP sandwich boards, and danced to the awesome beats of the Rude Mechanical Orchestra marching band.

And then, after a full week of participating in the US Social Forum, focusing on creating new solutions for green energy, healthy and just economy and jobs for all—we celebrated our revived vision for a new world by dancing on the Hummer’s grave at our art installation on Heidelberg Street. We held a ceremony in which we honored our ancestors who have inspired us to take action for a brighter world, and said farewell for good to the Hummer. We joined hands as part of the national Hands Across the Sand Day of Action and did a spiral dance around the Hummer, calling for an end to offshore oil drilling and gas-guzzlers. One little boy sung an alternate version of "Twinkle, twinkle little star" to the tune of "Twinkle, twinkle monster car". Musician Dave Lippman wrote up a parody to Mungo Jerry's "In the Summertime" and Anne Feeney performed anti-war tunes including "Have You Been to Jail for Justice". I led a short meditation to visualize the power of people joining hands across the globe to put an end to war and oil consumption. Tighe put the final touches onto the hummer and the tree was firmly planted. And then, as sometimes does when CODEPINK converges to do something transformative, magically the other core artists behind the Hummer project, Tyree and Kevin, arrived to join Tighe in the moment of completion. Starhawk came along and also blessed the space with her presence.

By working together, our CODEPINK team in Detroit brought smiles, creativity, and solidarity to the USSF, from carrying banners to speaking at workshops to circulating petitions and flyers and tabling to shuttling folks to jail solidarity to pitching in for whatever was needed at the moment.  And there was a magical element working with us too, which was especially present when the skies were clear on the day it was supposed to rain during our Hummer Burial, and when the full moon arose over the river as we did a spiral dance with Starhawk, and when we were offered an indoor table to share with National Assembly, and so many other little bright moments throughout.  We owe a HUGE thanks to the forum organizers who managed so many details and logistics to create the container for bridges to be built and for transformation.

During the past week, McChrystal got the boot, protests converged to oppose the G-20 in Toronto, and over 20,000 activists gathered in the US to build movements for a new world not based on corporate domination and militarism. We gathered in the heart of the nation to create the lifeboat, the people's movement for a just, peaceful, healthy, vibrant world.  Another world IS possible.  And I can see her breathing, dancing, turning out a hip hop beat, and marching boldly into the sunrise of a dawn just ahead.

Rae Abileah is the roseroots coordinator for CODEPINK Women for Peace.