Sixteen Years On, Guantanamo Must Close 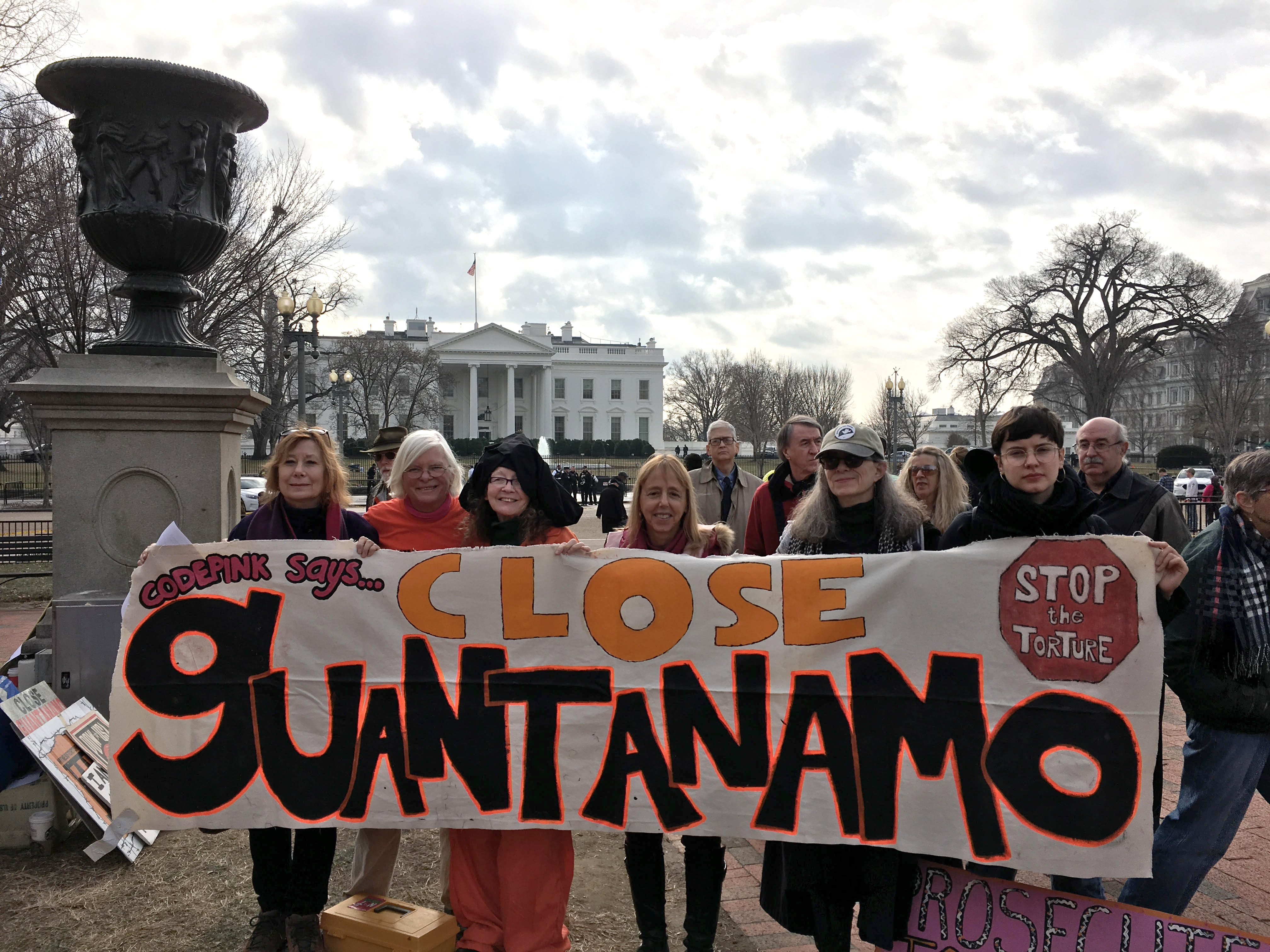 Remarks by Paula Graciela Kahn at the Rally to Close the Guantanamo Bay Prison held in Los Angeles, CA January 11, 2018.

Good afternoon. I want to remind folks that we are on occupied Tongva land.

Today marks the beginning of the sixteenth year of clandestine activity at the Guantanamo Bay detention camp, which has been a geographically isolated laboratory of impunity for U.S. war criminals.

GITMO has also been used as a stage for the U.S. to perform the “war on terror,” - to exert its global hegemony. Here, detainees have been arbitrarily labeled “unlawful combatants,” to strategically deprive them of the protections outlined in the third Geneva convention.

Today, we remember that U.S. presence in Guantánamo Bay is a contentious consequence of the Cuban–American Treaty, the 1903 Lease Agreement.

Today, we remember that the United States distributed leaflets and posters offering bounties - cash rewards - to Pakistanis and Afghanis in exchange for turning in “terrorists” to the U.S. According to the ACLU about 86% of GITMO detainees were reportedly turned into the coalition in response to the bounty offer.

Today, we remember the 779 individuals that have been abducted, confined, and tortured in Guantanamo.

Today, we remember that 41 people remain imprisoned at GITMO.

Today, we remember that 5 “high-value detainees” are being kept in Camp 7, a top secret detention location. What they all have in common is that they have been brutally interrogated by the CIA while previously held elsewhere for years in secret prisons run by the CIA, known as black sites. They are “high-value detainees,” who are kept on Camp 7 not because they are a threat to national security but because they are the living and breathing testimonies to the lawless, morally bankrupt, barbarous, evil behavior that is state-sanctioned by the United States government. We know that at least 26 people detained were tortured in CIA black sites before arriving to GITMO.

Today, we remember that the youngest person held in GITMO was 13 and the oldest 89.

Today, we remember that 21 children have been held in GITMO.

Today, we remember the 9 prisoners who died in custody at GITMO. 7 by suicide, 1 by heart attack and 1 by cancer. The youngest death by apparent suicide was Yasser Talal Al Zahrani, who was captured at age 16 and died at 21.

Today, we remember that it costs $7 million to imprison a detainee in Guantanamo per year. With 41 people remaining imprisoned there, that amounts to 287 million dollars per year, funded by U.S. taxpayer money. This does not include the multiple multi-million dollar construction projects at the detention center that have also been paid with our taxpayer money. We must interrogate who profits from these construction projects. The U.S. has hijacked freedom from 779 people, denied due process, and has hijacked our freedom by stealing resources our communities desperately need - to fund unspeakable violence waged on brown bodies.

We can no longer wait for justice from above, rather we must build a culture of accountability, which is why CODEPINK has launched a Divest from the War Machine campaign. We invite you to join us in calling upon our universities, city funds, financial institutions, religious institutions, union or pension funds, hospital endowments, members of Congress, etc. to implement Socially Responsible Investment policies and divest funds from companies that profit from war and militarism. We are having a week of action February 5-11. Please visit divestfromthewarmachine.org for more info.

Closing Guantánamo requires ending indefinite detention without charge or trial; transferring detainees who have been cleared for transfer; and trying detainees for whom there is evidence of wrongdoing in our federal criminal courts here in the U.S. If a prosecutor cannot put together a case against a detainee, there is no reason that person should continue to be imprisoned, whether in Guantánamo or the United States. We remind our fellow citizens of the world that we are awake to the crimes against humanity committed in Guantanamo. We are awake to the hypocrisy and ambiguity of the United States’ “War on Terror” in the name of “national security.” We invite citizens of the world to join us in building cultures of accountability, for transitional justice, for conflict transformation, and for peace. We know that without justice there is no peace.