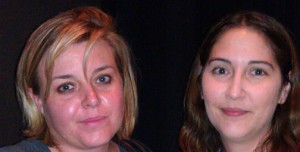 The Whistleblower is a political thriller starring Rachel Weiscz. It is now playing in LA and NYC, with more cities being rolled out in the coming weeks.

Larysa Kondracki, the director and co-writer of the film spent two years researching the reality of peace-keeping operations in Bosnia before writing the script. Weiscz plays Kathyryn Balkovac, a Nebraskan cop who goes to Bosnia as a Dyncorp employee, part of the international police task force. Like many people, she chose to work overseas because of the high pay without taxes.

C.J. met director Larysa Kondracki at a special screening of The Whistleblower on Wednesday, August 3.

The first time I saw the film, I was overwhelmed with horror. It was more difficult to watch than any film on a battlefield, because the war in this movie takes place on the bodies of enslaved women. Years ago, I heard that there were more slaves in the world today than at any point in human history. I thought that was hyperbole until the cold truth was dramatized for me.

Even more shocking is that the drama is true.

Everything that is portrayed in the film actually happened. It did not necessarily happen to those characters, but it happened. The sadness and the tragedy is that not enough was done. --Madeleine Rees, former Head of Office in Bosnia and Herzegovina, UN High Commissioner for Human Rights

Ms. Rees is portrayed by Vanessa Redgrave in the film. Though it may be unclear from simply watching the drama, she was instrumental in shining light on the situation in Bosnia. So much so that she was pushed out of the UN and filed a discrimination lawsuit. While Rees was able to find employment after leaving the UN (she is currently the Secretary General of Women's International League for Peace and Freedom), Balkovac is struggling to find meaningful employment, though she did publish a memoir of her experience.

If you see the film, consider taking copies of our War Criminal Accountability flyer. This is the type of movie that will leave people demanding a way to make change and CODEPINK believes in the prosecution of all war criminals.

Rees explains how human rights has framed her work and what she's doing now to challenge the idea that immunity equals impunity: