Sealing The Deal With Iran 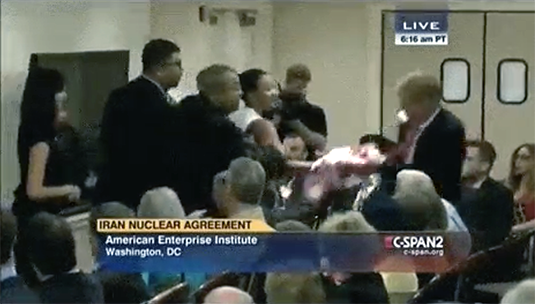 Yesterday was historic. The efforts of thousands, including you, resulted in a key number of Senators--41--saying they will vote Yes to the Iran Nuclear Deal.  It’s ironic that just before peace groups were holding a press conference celebrating the 41 votes, former Vice President Dick Cheney was speaking out against this deal. Dick Cheney--really??? The guy who dragged us into the war in Iraq and now wants to drag us into a war with Iran? So I went to Cheney’s event to tell him that we, young people, are sick and tired of war.  The Hill,  Politico and Huffington Post captured my messages and the wild man who attempted to steal my banner.

Together, we have done great work to stop the warmongers. But I’d like you to take another action. Tomorrow, Thursday September 10th all around the country people will gather at hundreds of congressional offices and other public places for Vigils for Peace and Diplomacy. Please consider joining one of the gatherings nearest you.

Stopping The Next War Now,

PS. Follow the CODEPINK action in DC all this week! CODEPINK and allies will be on Capitol Hill every day from September 8-17th to support the Iran nuclear deal until the final vote is cast.

Text "@CODEPINKaction" at 23559 to receive text updates! If you’re in the area, please join us.