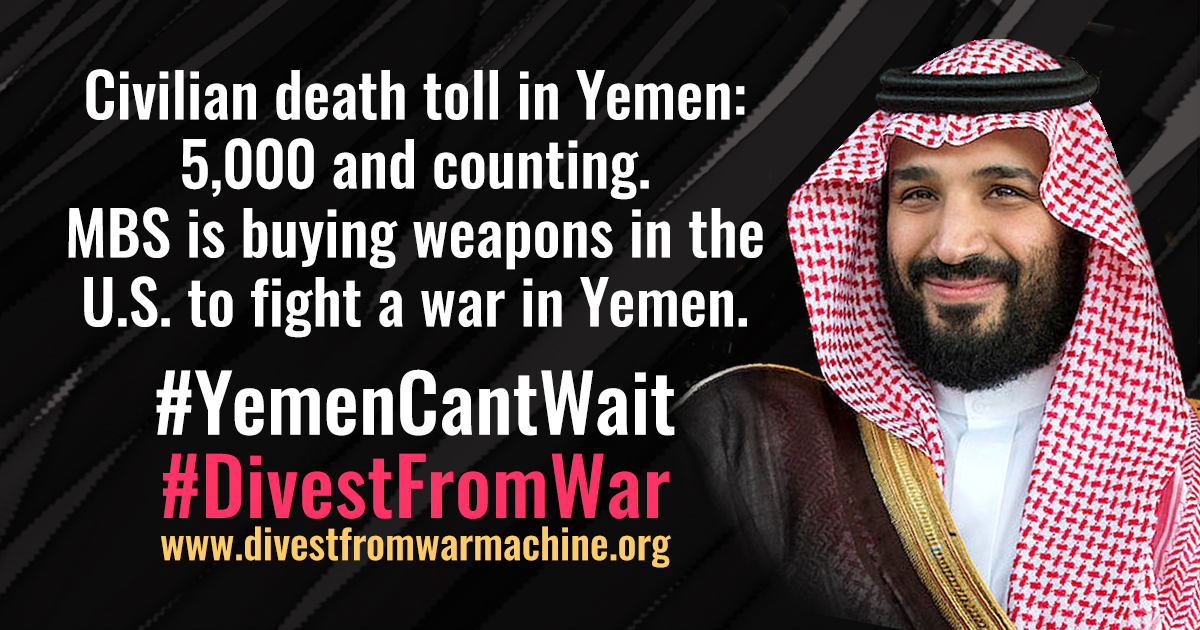 Saudi Crown Prince Mohammad bin Salman (MbS) is ending his United States tour in Houston. On the Prince’s agenda is visiting Aramco, the Saudi national oil company, breakfast with President George H.W. Bush and former Secretary of State James Baker, a tour of Hurricane Harvey reconstruction with Mayor Turner, and stopping at the Houston Chronicle. We must take a stand against MbS’ web of lies, demanding that he stop his catastrophic war in Yemen and lift his humanitarian and commercial blockade. Join us on Saturday, April 7th, as we protest at City Hall, 901 Bagby St, Houston, TX 77002. We are calling on the City to hold this war criminal accountable and not do business with Prince bin Salman until he unconditionally stops the war in Yemen and lifts both the humanitarian and commercial blockade.

The Prince’s schedule is closely guarded, but we know the event will be in the morning. RSVP to protest at City Hall and we will keep you updated. We need to stand against normalizing violence! Join us on the streets as we demand action for Yemen because #YemenCantWait.

“Mohammed Bin Salman employs an army of lobbyists and PR firms to sell himself as a reformer when he is really a war criminal and a power-hungry thug whose ego rivals that of Donald Trump,” says Medea Benjamin, CODEPINK co-founder. “It is absurd that the U.S. is in bed with this ‘prince’ who mercilessly bombs Yemen, shakes down Saudi businessmen, captured the Lebanese prime minister, concocted a rift with Qatar, and even kidnapped his own mother. The Saudi monarchy also jails and beheads dissidents, discriminates against the Shia minority, and forces women to live under a repressive male guardianship system. It is not a regime the United States should be arming and abetting.”

MbS’ U.S. visit included a visit with Trump that resulted in a press conference touting the President’s plan to sell more weapons to Saudi Arabia. MbS continues to stockpile weapons to be used create the worst humanitarian crisis on earth.  MbS is in our backyard and we need to say no to war and weapons. Join us to protest at City Hall. We need your help to stand up for Yemen and against war.