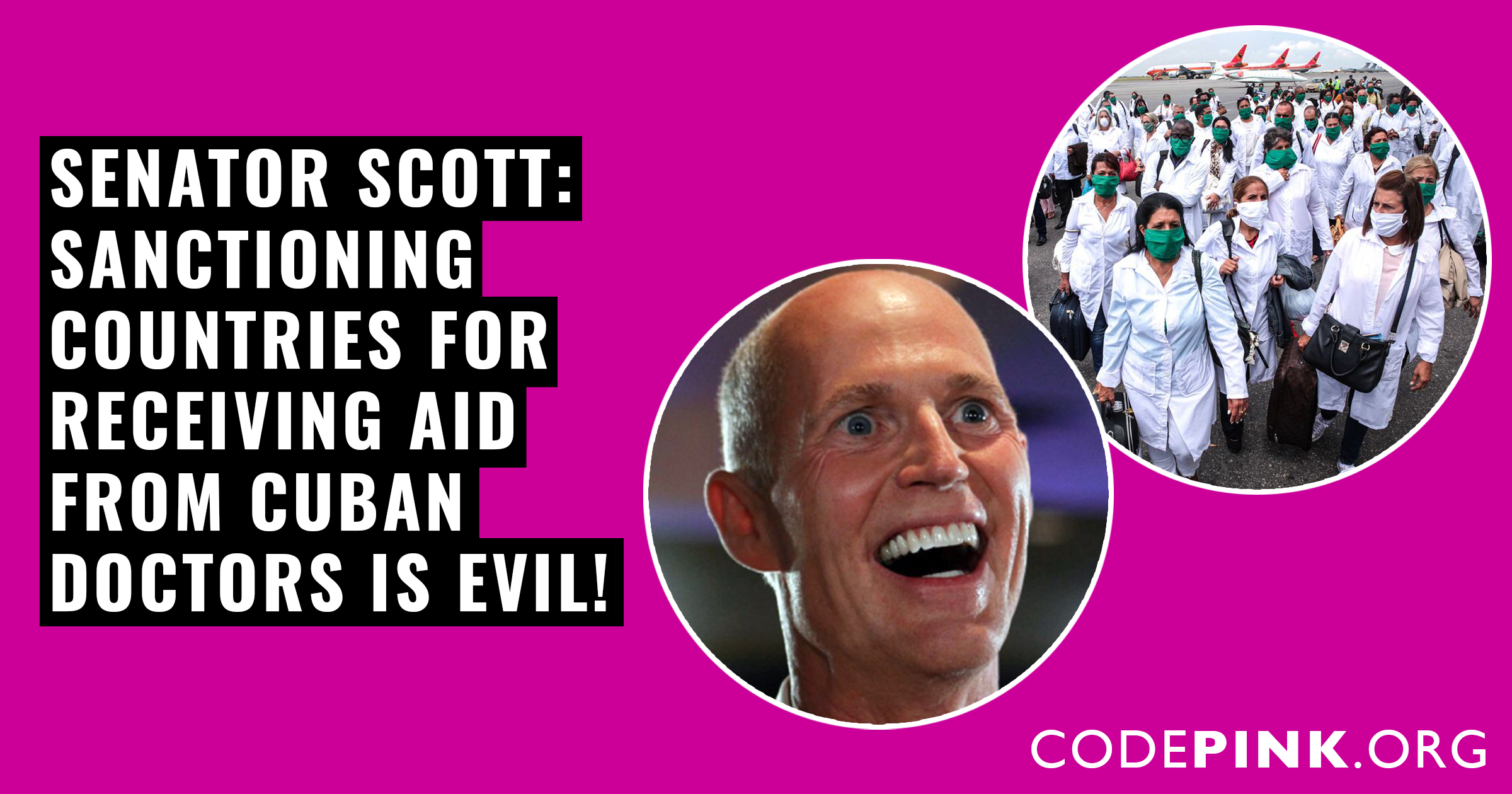 Trump and his allies are at it again, trying to convince the world that Cuban medical volunteers treating COVID-19 in 27 countries are actually victims of human trafficking. This time Senator Rick Scott (R-FL) is the one peddling the lie, and he’s gone so far as to ask the White House to sanction countries that receive help from Cuban doctors!

We know the truth: Cuban doctors are working all over the world as an expression of solidarity and love. As we formally launch the campaign to award the 2021 Nobel Peace Prize to Cuba’s Henry Reeve International Medical Brigade, we must also fight the vicious smears they are receiving.

The claims about human trafficking are completely baseless. Cuban medical personnel volunteer for their missions abroad and earn more money on these missions than they make at home. Not all the missions earn revenue - only the countries that can afford it actually pay for the services. Some of this revenue goes to the doctors, while most goes directly to Cuba, where it is then reinvested in education and healthcare, thereby contributing to the wellbeing of the Cuban people and enabling Cuba to send even more missions abroad. That is a far cry from human trafficking, but Trump and his allies are more interested in spreading lies than in saving lives!

This is part of a coordinated plan to ruin Cuba’s economy. Just last week, the Trump administration imposed new sanctions on Cuba’s tourism industry and on its ability to handle remittances. Cuba’s medical cooperation is another important part of its economy. Rather than exporting weapons and violence, like the U.S., Cuba exports medical assistance!

Tell Senator Rick Scott that Cuba’s medical missions are an example of solidarity we should imitate, not sanction! Medea will deliver the petition to his office in Miami later this week.

Of course, the best response to Trump, Scott and their allies would be for Cuban medical personnel to win the 2021 Nobel Peace Prize. CODEPINK is proud to be part of an international coalition seeking to recognize Cuba’s solidarity and internationalism. Check out the links in the p.s. for more info!

P.S. The Cuba Nobel campaign officially launched this week! Here’s what you can do to follow this campaign:

P.P.S. On Thursday at 11 a.m. Eastern / 8 p.m. Pacific, listen to Medea Benjamin talk about the campaign on CODEPINK radio!