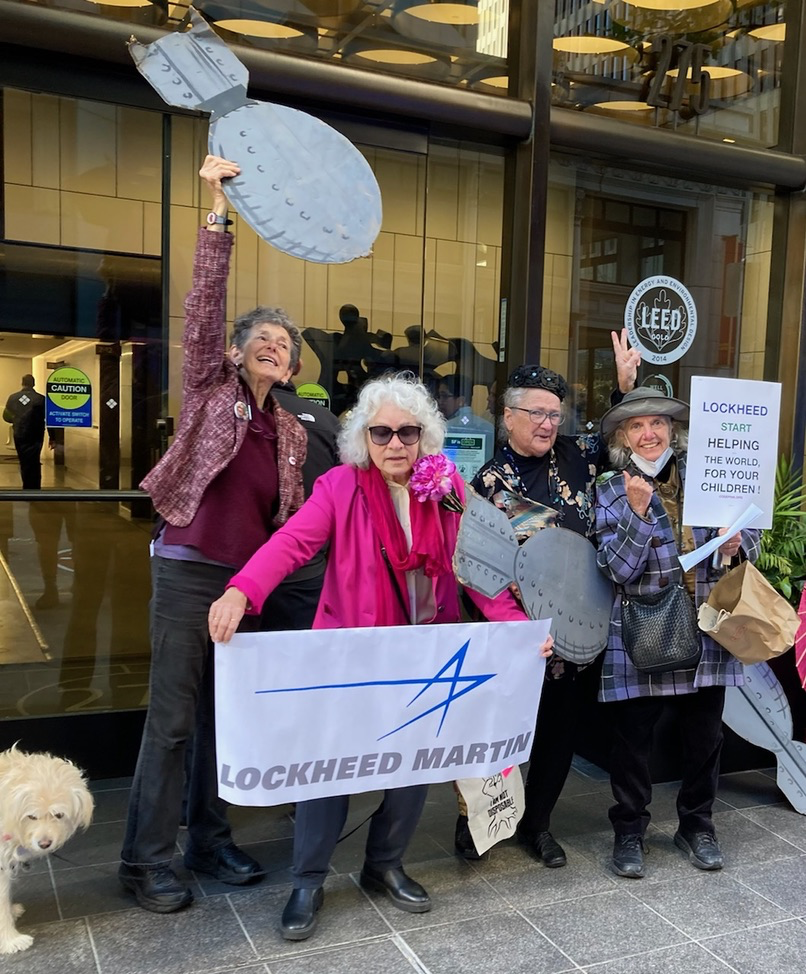 Thursday, November 10, saw a beautiful outpouring of anti-militarism and anti-“merchant of death” Lockheed Martin sentiment in San Francisco as hundreds of Youth Vs. Apocalypse (high school and younger) youth rallied and marched with Veterans For Peace, CODEPINK, Extinction Rebellion, Sunflower Alliance, 350.Org 1000 Grandmothers, CLIMATE JOBS, EAST BAY DSA and others with the theme "COP27: Militarism Fuels Climate Crisis". This action was one of over a dozen VFP and CODEPINK actions happening this weekend to mark Armistice Day and COP27 in Egypt.

We tabled at the action with our very pink booth, stickered 100s of high school youth with CODEPINK “War is Not Green”, “Rise, Love, Resist!”, “Arms Are For Hugging, Not Police”, and “Make Out Not War” stickers— which were a hit! — and performed the Billionaires For War skit “Hooray for Lockheed Martin!” that I wrote with Steve Morse, who is Co-founder of the VFP Climate and Militarism Project. We had an enthusiastic but small audience since the students needed to return to school at 1 PM.

The actors were VFP Board member Paul Cox: Pentagon Chief General Mark Milley (Paul was really into his role, requiring people to salute him

); Steve Morse, VFP Militarism and Climate Project: Lockheed Martin CEO James Taiclet; Jeff Paterson, Director, Courage to Resist: MBS (Saudi Crown Prince Mohammed bin Salman); Cynthia Papermaster: Speaker of the House Nancy Pelosi; Susan Witka, CODEPINK: Lockheed Martin lobbyist; Catherine Hourcade, CODEPINK: Betty Billionaire, Lockheed shareholder; and Denise Hingle, CODEPINK: Marsha millionaire, LM shareholder. We did a "Duck and Cover" drill, and at the end of the skit we were joined on stage by three Youth Vs. Apocalypse youth who showed how the power of youth can change the world by convincing Lockheed Martin to convert to peacetime industry. I’ll try to find video and photos of the skit, and an interview I did with ABC Channel 7 News.

During the colorful high-energy march (see video linked below), Eddie Falcon spoke powerfully at a military recruiting office against joining the military, pointing out the racism he experienced among other difficulties of being in the military. Thank you Eddie.

Then at Lockheed Martin's office in the midst of San Francisco’s Financial District, students painted a street mural with artivist David Solnit that said “DEFUND VIOLENCE-- FUND OUR FUTURE”. You can see the mural in the photos linked below.

Veterans for Peace and CODEPINK spoke about giant weapons dealer Lockheed Martin’s climate killing criminal activities and urged them to transition their business and employees to peacetime industry. Steve led the gathering in a call and response piece he wrote about Lockheed. Paul Cox of VFP, Catherine Hourcade, Luck-key and I risked arrest by attempting to enter the building to deliver a petition to Lockheed calling for the company to transition to peacetime industry (see photo below). We  were blocked by Security, who announced that the building was on lockdown.

We locked down Lockheed Martin!

Huge thanks to Catherine, Susan, Denise, Diana, Eleanor, Sheri, Paul, Steve, Vince, David Solnit, Matt Leonard, Robb Godshaw, Bert Knorr, Jim Driscoll, Garett Reppenhagen, CODEPINK staff Justina, Melissa, Teddy, Olivia, and Shea, CODEPINK Co-founders Jodie Evans and Medea Benjamin, Cres Velucci and Tracy Rosenberg, CODEPINK dog Luck-key, and so many others who sent media alerts, provided banners, unloaded and loaded my car full of props and equipment (I've injured my back so was not able to lift heavy stuff), put up our pink canopy (see photos linked below), collaborated on the plans, loaned equipment, provided moral support, and who made themselves available for a thrilling youth-led action. Special thanks to Steve Morse, a delightful human and accomplice, who spent days and hours on this project with me.

Thank you to Aniya, Dulce, Carolyn, and YVA— you are fantastic organizers and you’re giving us needed “active hope” for a future on a liveable planet. Thank you for including Veterans For Peace and CODEPINK in today’s terrific action.

After the catastrophic wars and ballooning U.S....