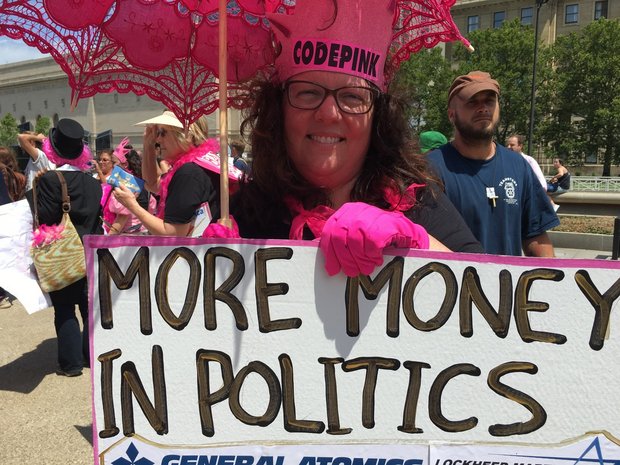 Two things happened in Cleveland last week. Five thousand police officers came to town, and we had a Republican Convention.

It was clear in the month leading up to the RNC that this was going to be the Convention of Fear. Media outlets predicted riots. The city ordered 10,000 plastic handcuffs. Businesses downtown announced they were closing to avoid the mayhem.  Because of the big money NRA, Republicans announced the open carry of guns policy in the event zone. Social media was filled with rumors of different groups, pro- and anti-Trump, coming to exercise their second amendment rights. Add all this to the rhetoric of Donald Trump filled with misogyny, anti-protester, anti-Muslim, and anti-immigrant hate speech, and that left very few people feeling the warm fuzzies in advance of the event.

The truth is, nothing terrible happened. There were no riots. There was no mayhem. The fantasy threat never showed up. But there were lots and lots of police officers. Rows and rows, shoulder to shoulder, sometimes two and three rows deep, they were on horses and bikes, with and without riot gear. They were on rooftops with guns and binoculars. Not exactly conducive for people to assemble and voice their concerns and grievances. Not feeling welcome or safe at this exclusive Republican event, lots of people, activists and Cleveland residents alike, decided to sit this convention out. I can’t blame them; the list of people that Trump deems unwelcome and undesirable is a long one.

For most Cleveland residents, this RNC party was seen as a waste of money that could otherwise have been used to implement the community policing reforms suggested in the DOJ Consent Decree.

But for CODEPINK, in our pink Lady Liberty robes with our torches, we made the best of it. We held up signs that said, “Refugees Welcome.” We let people know Immigrants were welcome here. Our message was of anti-war, peace, hope, women’s reproductive rights, and inclusion. [Note: for a round up of photos, videos and articles about CODEPINK at the RNC, please go here.]

All of the speeches inside the convention were filled with doom and gloom, and language that excluded large sections of the American population.  Brave CODEPINK leaders managed to get inside the convention and hold up banners that said “Yes We Can End War”, “Immigrants Welcome”,  “No Racism, No Hate”, and “Build Bridges Not Walls.”

We managed to crash the party and it was so much fun! A lot of people wanted to know how we got in. I said we were Convention Ninjas. I loved leaving people with the image of Alli McCracken crawling through air vents or Medea Benjamin and Jodie Evans repelling in from the rafters.

We dropped 500 tennis balls supplied by the Brady Campaign to end gun violence, in the middle of the event zone at the door of the convention. We chanted “Ban Open Carry, Not Tennis Balls.” We were swarmed by hundreds of police officers on bikes, foot and horse. All with bewildered looks when they arrived only to discover that the alert was given to contain 12 ladies in pink rolling around in pink, blue, and yellow balls. They confiscated all of our balls but everyone got the point and the irony of AR-15 rifles being more acceptable than toys.

We disrupted a hate group with a Dance Party in the fountain on Public Square and had a Beauty Pageant where anti-war pink beauties all took home the prize. This was truly a week to remember and we all felt great about what seemed like nonstop actions.

The last night, with fireworks overhead signaling the end of the RNC, I felt a huge relief that no one was injured. People were hugging and giving cops high fives. There was a sense that the police made a positive impact by having a laid back attitude, smiling and chatting with people.

While it was a needed exchange and a positive event for the police to be able to feel loved after the last few weeks’ events in Dallas and Baton Rouge, a feeling of sadness came over me for the people of Cleveland.  The media immediately called the event a huge success. How can the RNC in Cleveland be called a success when so many of the residents were excluded and absent? How can the RNC in Cleveland be deemed a success when so much money was wasted on the militarized look and feel with excessive police presence? Could we use that money for other things in Cleveland neighborhoods?!

The people who really needed to be in a positive dialog with the police, delegates, and visitors to have their voices heard, build understanding, and to feel the love were scared away from the party or made to feel unwelcome by the campaign rhetoric of Donald Trump. It’s a party they really needed to attend. After all, isn’t that what a political convention is supposed to be about?  Isn’t it supposed to be about getting Americans together and talking about what’s best for our country and working together for liberty and justice for all?

Toni Rozsahegyi is a volunteer organizer for Cleveland CODEPINK and a board member of Cleveland Peace Action. For a profile of her in action at the RNC, please see this.