Returning from Cuba with Love 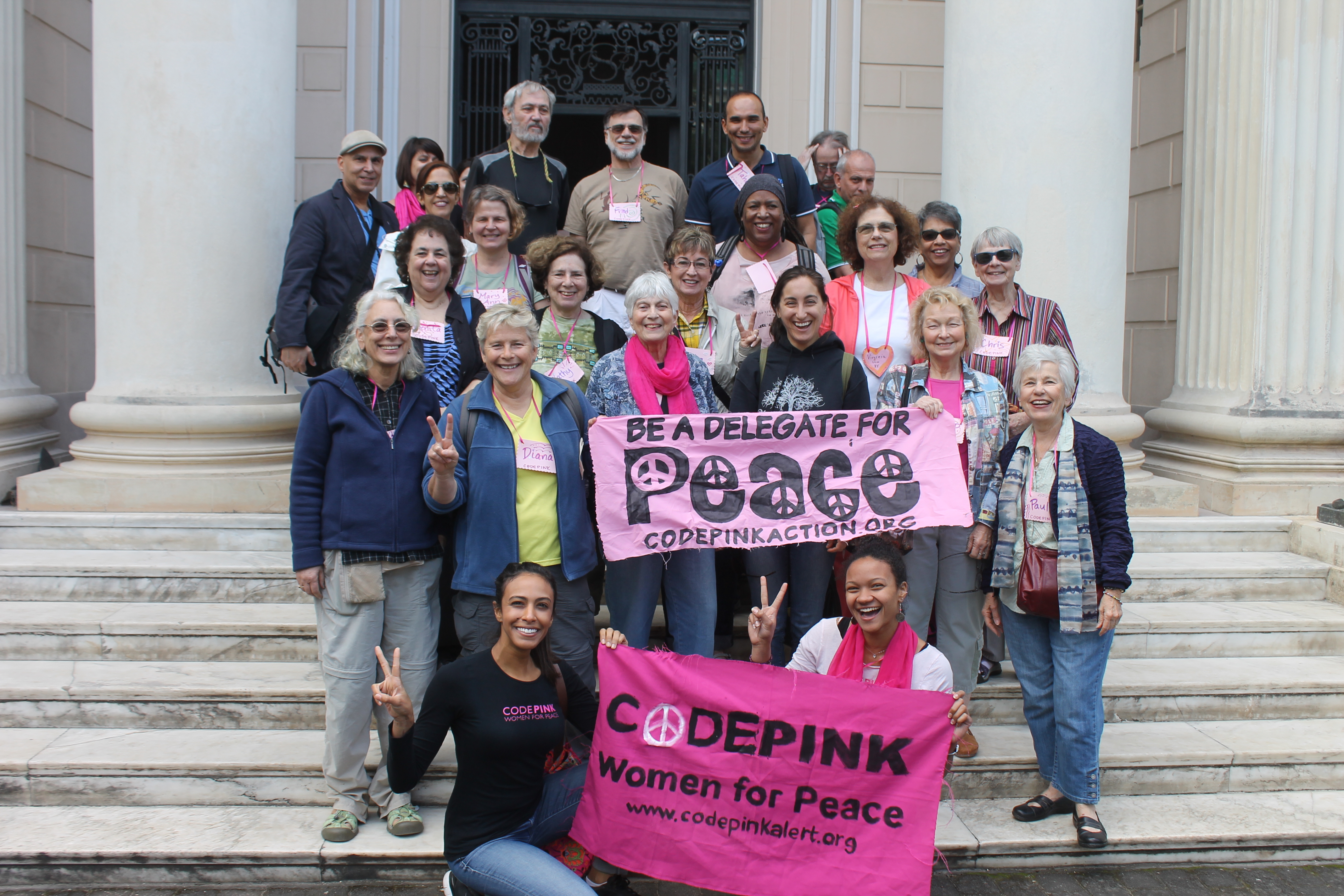 Before starting an internship with CODEPINK in July 2015, virtually the only things I knew about our small Caribbean neighbor had been gathered from the little I had learned in high school history classes, and many repeated viewings of the movie Dirty Dancing 2: Havana Nights. Needless to say that my impression from a few readings on the Bay of Pigs and a film set in pre-revolution Cuba (albeit with amazing dancing) did not give me a nuanced perspective of the political and cultural climate in this impactful, inspiring and perplexing country.

I still have a lot to learn, many books to read and perspectives to take into account, but after spending an eye-opening week in Havana, Cuba my impressions have certainly changed. I’m incredibly grateful to have been given this opportunity by CODEPINK.

Whether you pay attention to the mainstream media, listen to what US politicians have to say, or get a view from outside of the States, American foreign policy is often a conundrum of conflicting opinions and versions of the truth. For the majority of the past 50 years our policy with Cuba has been quite clear—non-negotiation—including such measures as adding Cuba to the terrorist list, instituting a travel ban and subjecting the people to a rigid embargo. Throughout the week in Havana, it was powerful to witness first-hand the impact that American foreign policy had made and is still making in Cuba.

The embargo has restricted the Cuban people from so much potential for economic growth, exchanging of ideas and services and from having the most effective voice in our global narrative, among other things. Just by looking around the streets of Havana, one sees that the embargo has restricted development whether through the automobile industry (many cars are from the 1950s--and have the difficulty getting parts and the exhaust fumes to prove it) or the unnecessarily complicated currency system. 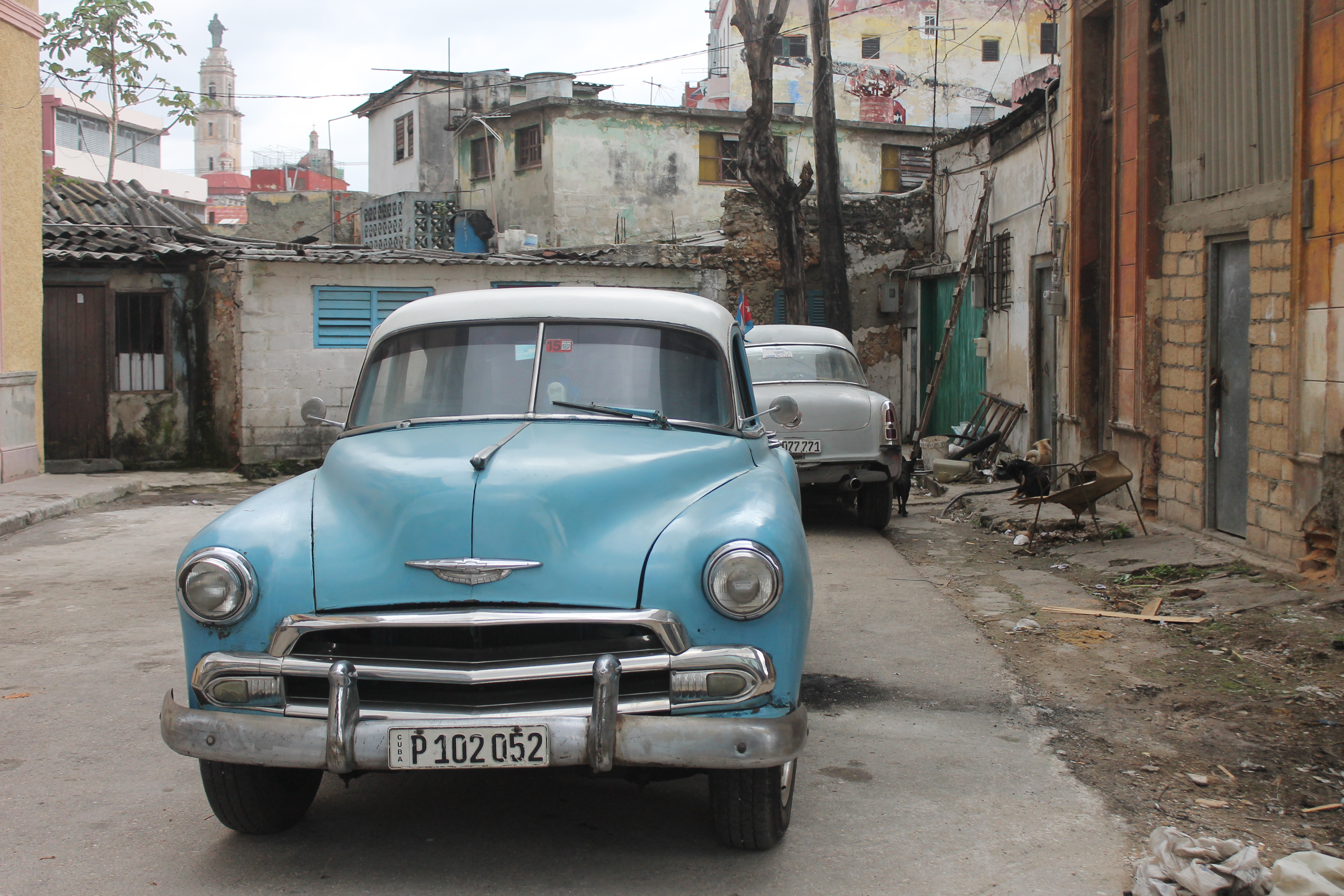 Flying back from Havana to Miami was a confusing experience as well. One minute I’m still among the 1950s cars and the beautiful people and language, watching a young man saying a tearful goodbye to his family at the airport . Forty minutes later my data and phone service are back on my cell, and it was as if Cuba was just a dream. Getting across Texas or going anywhere in LA traffic takes longer than it does to visit our neighbor just 90 miles south, and it is mind-boggling that a Cold War era mindset is still fogging many people’s perceptions of this country.

I returned to up-lifting news, however, that Obama will be visiting Cuba in March and that commercial flights to Cuba will resume soon! Now to only think about what our future POTUS will do to either strengthen (fingers crossed for liberals…) or derail (GOP) our relationship, and what that will mean for the economy and society of the Cuban people.

Obviously the embargo and cutting of off services to an entire country is a human rights issue. As is the occupation of a city for use as a U.S. military base and all the abuses that occur as a result, not to mention what actually goes on inside Guantanamo prison. CODEPINK has been working to pressure Obama to uphold his promise to close the prison, and the last delegation to Cuba addressed these issues at an international conference. On this delegation however, we found there are interesting and inspiring things to learn from Cuba about human rights as well.

Although it’s not quite a four-letter word, somehow “socialism” has become a curse in mainstream American English. As the election cycle draws near and Bernie Sanders continues to shake things up with his cries of democratic socialism, the “s” word is slowly becoming more accepted among certain circles (especially millennials) and at least discussed by everyone else. A few of the essentials that Bernie talks about—and that Cuba has had for the past 50 plus years—include free education and free healthcare.

During our trip we had the chance to meet with many professionals as well as visit schools and a health center. One other notable visit was to the Literacy Campaign Museum, where we learned that in response to harrowingly high illiteracy rates in the 1950s, there was a national call by Fidel Castro to educate the Cuban population by teaching them first to read. Across the country from cities to farms, teachers as young as 12 taught students as old as 106 to read, and today the literacy rate in Cuba is at an impressive 99.7%.

But the education does not stop there of course. As a student who will soon join the ranks of young professionals struggling to repay college loans, it seems like a dream that Cuban students go to school for free. Medical school, law school, anything, free. This is important to note as it is a passion (and problem!) of mine, but I’ll let the presidential candidates keep up that conversation for now. 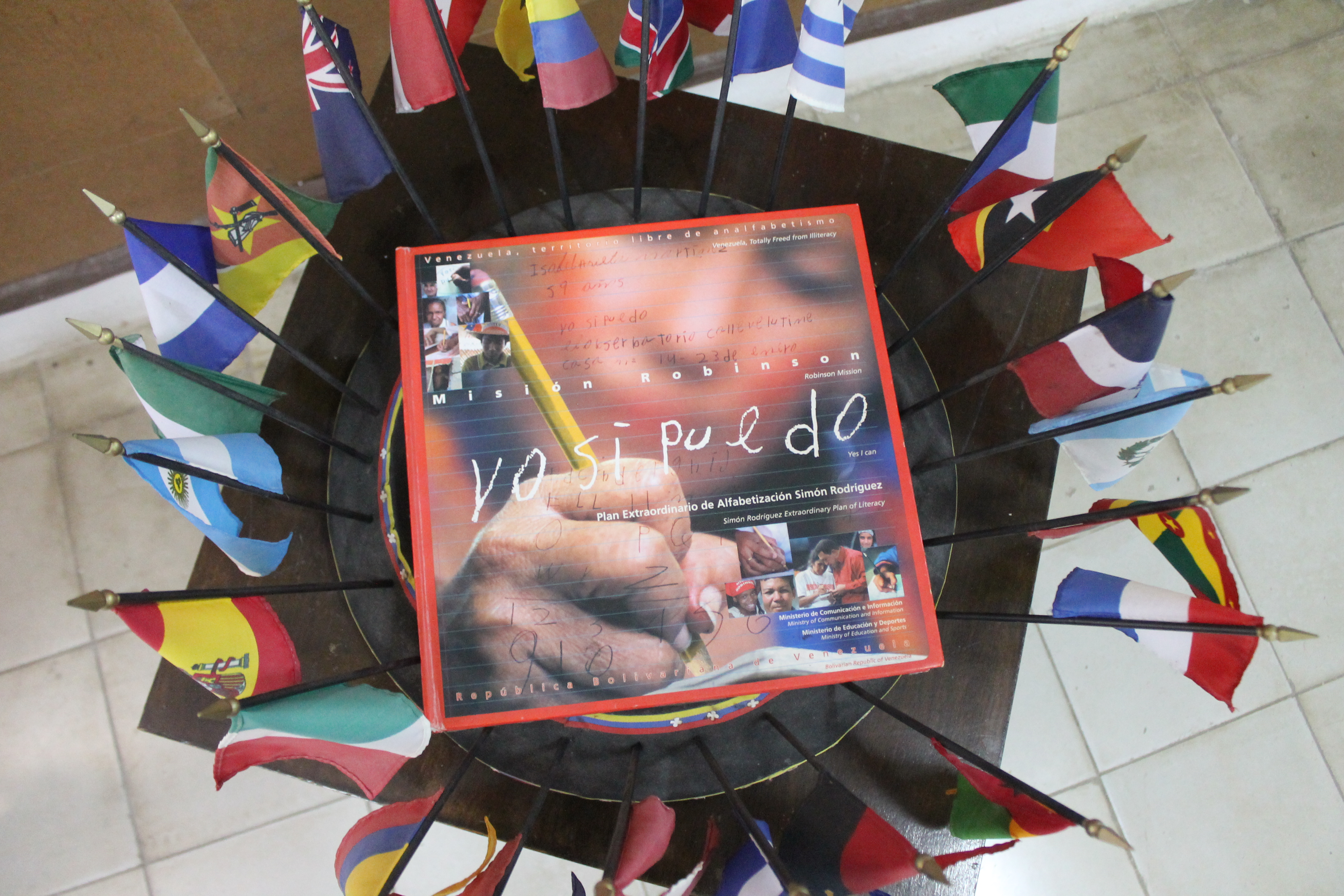 The conversation that I do need to have though is “the talk.” That’s right, I’m talking about sex, or to be more exact, sexual health education. When we discuss how much there is to learn from Cuba, the sex talk isn’t one we often hear about. As far as medically accurate, comprehensive sex education goes, Cuba, despite physically being a short 40 minutes away by plane, is decades ahead of the United States. This is largely due to the National Sex Education Center (CENESEX) which was created out of an existing group in 1988 by Mariela Castro. When CENESEX talks about sexual health, they talk about it as a right, a political, human, equal one.

Using different branches including teaching, research, community work and legal aid, this organization teaches sex education from a social/gender/human rights focus, including issues of disability and LGBTQ issues among others. Although Cuban people are still advocating for a change in the family code to include same sex marriage, the fact that these discussions are even happening—and in public schools!—is incredibly important to me as a sexual health advocate and as a young person. In the US we’ve finally taken a step in the right direction with Obama cutting funding to abstinence-only sex ed (another welcome surprise upon my return), but we still have a long way to go. The idea that young people can feel empowered to own their own bodies and minds in a society that provides equal opportunity for both inspires and fuels me to continue my work as an advocate on all levels. 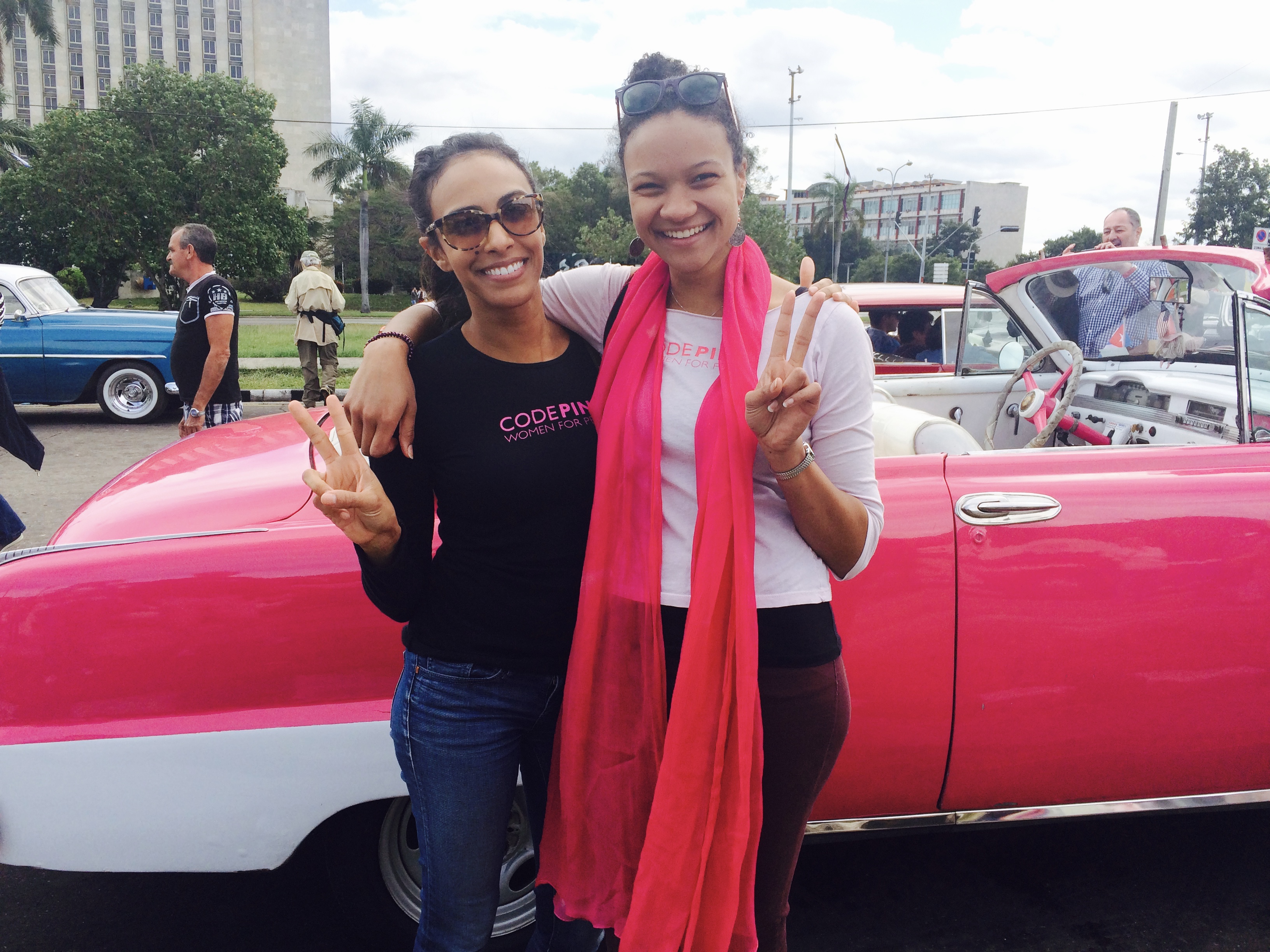 Young people's voices push these conversations forward in new directions, whether they are speaking about sexual health or foreign affairs, but it is all too often that our opinions, knowledge and potential get written off because of our age. However this trip flipped that switch in so many ways for me, the first being that I was co-leading the delegation! What a powerful thing, to be “in charge” of thirty people, aged 34-89 years old, each with an inspiring story and contribution to the trip as well as to their individual communities.

Writers, educators, business owners and advocates of all sorts built a community of our own among the delegation, discussing what peace means to us, what thriving communities look like, and the importance of solidarity work. In so many ways, these things exist in the hearts and minds of many Cuban people. We visited with “Espiral” (Spiral) an organization that embodies community by bringing together people of different ages, from different neighborhoods, races, education levels and professions to discuss the social issues facing Cuba, and also present solutions to them. Being able to share these ideas with both the Espiral and CODEPINK groups that came from so many diverse backgrounds and experiences emphasized and solidified the idea of thinking globally and acting locally. 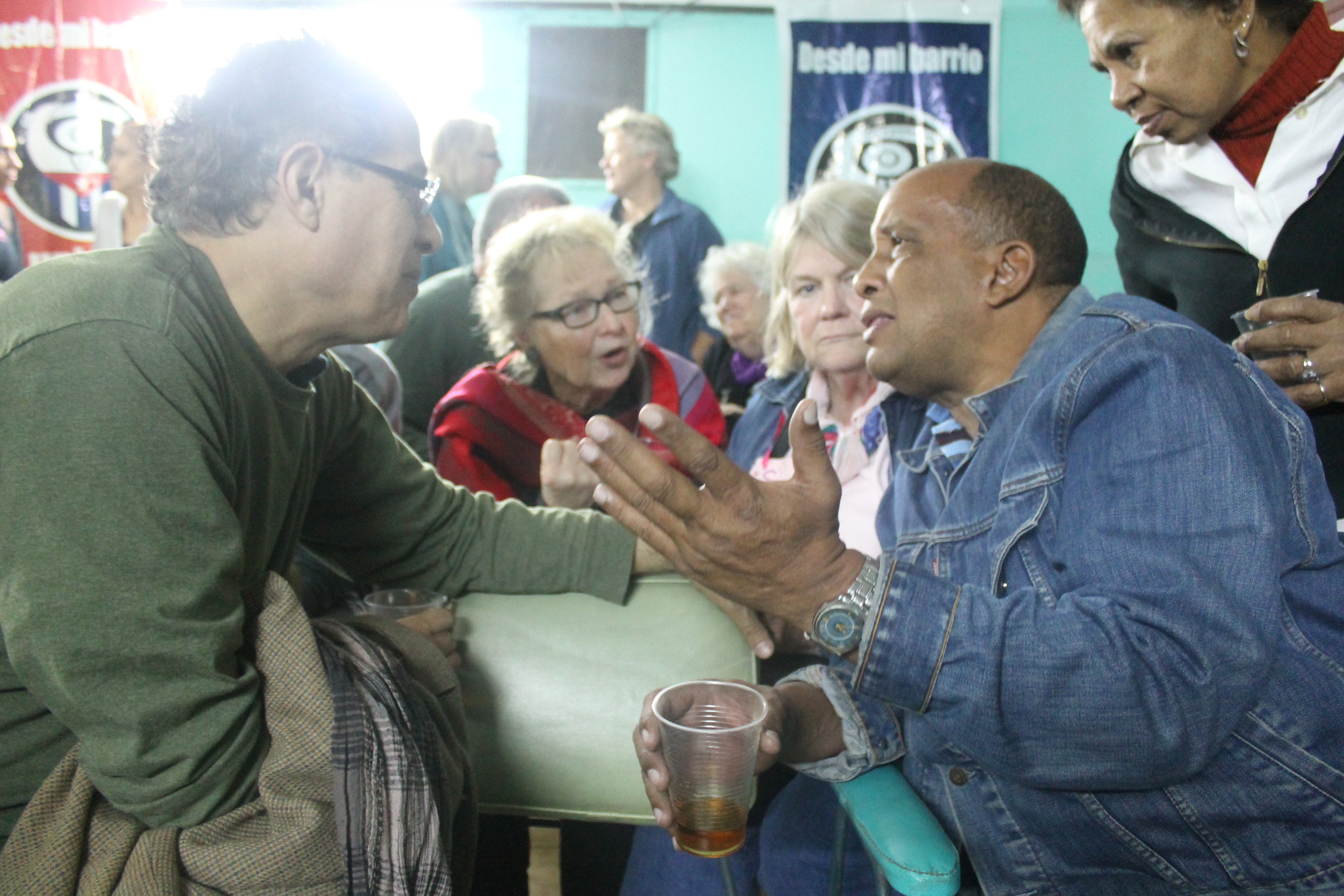 Now we are at a critical time in our relationship with Cuba. Elections are coming up, Obama is going to visit (and CODEPINK is taking another trip in May!), and the society and culture of my new Cuban friends is at a turning point. As an advocate for human rights, diplomacy and international peace-building efforts, I have hope for the future of our relationship. However, in order for that bright future to be realized many things need to happen. The US needs to alter its hegemonic approach to Cuba (and foreign relations in general). Rather than trying to force “democracy” into the government, we in the US need to allow Cuban people to build the society they want. We should support not dictate these developments, and as far as infusing Cuba with capitalism as some might want: buyer beware!

We have a lot to learn from our 90-mile-away neighbor, and they have a lot to gain from normalizing our relationship as well. From day one at CODEPINK DC, partying in front of a newly opened Cuban embassy, to day one at CODEPINK LA, protesting the prison at Guantanamo Bay on the anniversary of its opening, to experiencing the music, joy and tenacity of the Cuban people first-hand, I am humbled and grateful to have been given this opportunity to learn and will continue to work in solidarity for a bright future. VIVA CUBA! 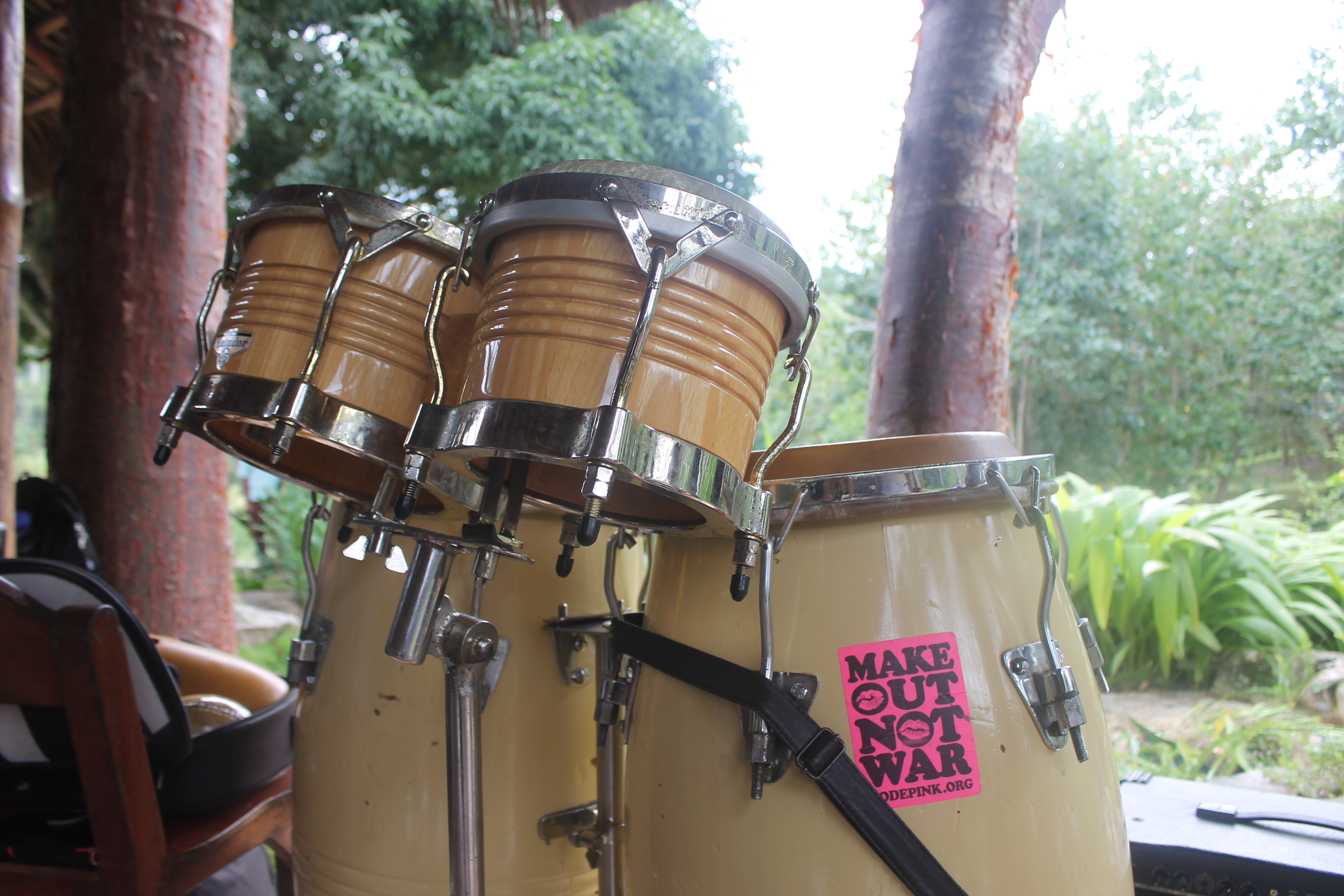 Michaela Anang, 22, is a staff member in the CODEPINK LA office. She studies Human Services and International Affairs at Northeastern University.