Reports from the Frontline: Iyad Burnat on Palestinian Non-Violent Resistance 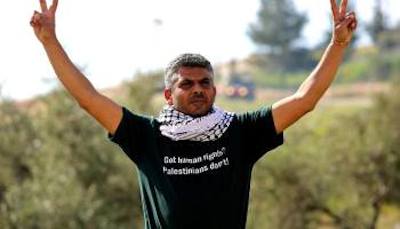 Iyad Burnat is the coordinator for the popular committee in Bil’in, Palestine, a small farming village 7 miles west of Ramallah in the occupied West Bank. For eleven years Iyad and the Popular Committee have organized the people to Bil’in to participate in weekly non-violent demonstrations against the confiscation of their land, destruction of their olive trees, and Israel’s illegal Separation Wall and settlements.

In the summer of 2014, Iyad's then 15-year-old teenage son, Majd was shot in the leg by the Israeli military while attending a nonviolent protest in Bi'in during Israel's 2014 assault on Gaza. The gun shot severed a nerve in Majd's leg, causing him to permanently loose all feeling in his foot.

Recently Iyad released a book describing his village’s ongoing struggle for justice and freedom (this book will be sold at the event), and what inspires them to continue non-violent resistance.

“So we must continue to resist, for my children and for all our children, in the hopes that our efforts today will create a future for Palestinians in which we are safe and free.” – Iyad Burnat

REFRESHMENTS WILL BE SERVED

All Non-Hunter guests must register here.
Toward peace and justice,

Nancy K, Susan B, Ariel, and the entire CODEPINK team