Reportback: Volunteering for Refugees in Greece 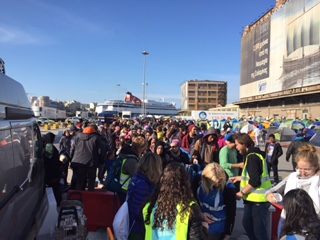 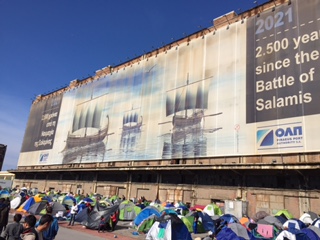 Yesterday I donated the reusable sanitary napkins to a local squat in Athens that's been turned into a shelter for refugees. It was on the list of needs posted by the shelter.

I spent the morning at Port of Piraeus where there are thousands of refugees living in tents. I worked with A Drop in the Ocean organization, distributing tea and sandwiches. Apparently it was the only morning meal being distributed. The Red Cross has done it in the past but not this morning. 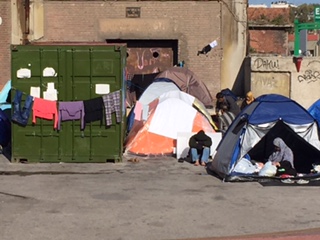 It was extremely overwhelming watching hundreds of people rush to make their way in line. There were only 20 of us doing crowd control, security, serving tea & handing out sandwiches. I fought hard to keep it together. I wanted to breakdown and cry after seeing the desperation on the faces of the women and children.

I slipped away at 11:00am to meet up with the other volunteers at orientation. We all got the low down on life at the Port. It's open and overseen by the Port Authority. Anyone can enter which makes the refugees vulnerable. There was a report that 3 children were picked up and put in a car yesterday, but the driver was intercepted by volunteers and the kids were released. Also the Afghanis and Syrians refugees do not get along. There have been fist fights between both groups at the Port, involving hundreds of men. We have been asked to follow protocol and not give favoritism to a person/group or what might be interpreted as favoritism. We also have to confront anyone that looks suspicious because of the vulnerability of the women and children. 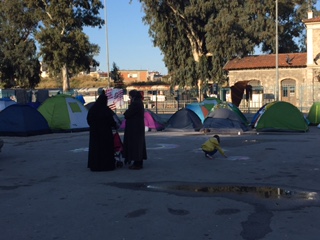 This week the volunteers will do a census of all the refugees living on the Port or living at Port E2. The government operated camps are full, which is why the refugees live at the Port, or decided to live at the Port because they didn't like the government operated camps. The Greek military provides hot meals in the evening and clean blankets often. There's a building at the Port that has been occupied and this is a place where refugees can take showers. There are a lot of resources in Athens but not a lot of shelters.

I met a lot of really great volunteers and a lot of Americans making the journey to Greece to help out. Nice that SF-Bay Area residents are in the house, making that 14 hour flight! Representing!

I head back to the Port tomorrow morning. On Wednesday I drive up to Ritsona to help out at the military operated camp. On Friday I drive to Idomeni, which is suppose to be the worse camp -- lack of resources, shelter and support. I'll drop off the duffle bag of knitted goods at Idomeni. Nice that the airline didn't charge for the extra luggage.

Nancy Mancias is a CODEPINK Campaigner based in San Francisco, CA. She is currently volunteering in Greece as well as delivering offerings from the CODEPINK community during this difficult time.