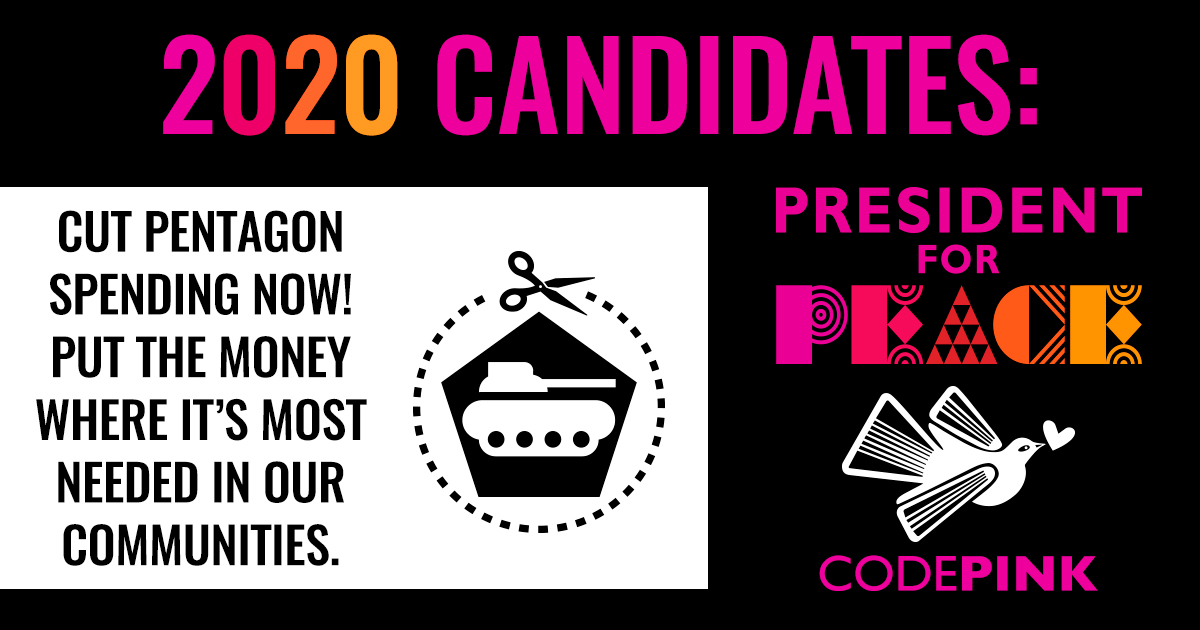 Thursday, May 23 — CODEPINK joined the newly formed coalition Put People Over the Pentagon in calling for a large reduction in Pentagon spending. CODEPINK is stretching their ask that the next president of the United States should cut up to $350 billion annually from the Pentagon and direct the savings to critical community needs, CODEPINK asserted in a letter to all announced presidential candidates. The seventeen groups comprising the coalition represent a broad base of progressive organizations.

Savings outlined in the call for Pentagon reductions will come from cutting several wasteful and harmful programs including closing hundreds of military bases around the world and calling for an end to the dangerous creation and maintenance of nuclear weapons. “We are asking the next president of the United States to make major cuts to Pentagon spending to reign in out-of-control military costs that doesn’t keep anyone safer and instead spend those dollars in our communities where it’s needed,” said CODEPINK national organizer Maya Rommwatt.

Pentagon spending far exceeds the military spending of other comparable nations, which comes at a high cost to people living in the United States. A dramatic reduction in military spending is shown as not only feasible, but a highly efficient use of funds by the new coalition. At a time when the Pentagon cannot manage to pass an audit, progressive groups are sounding the alarm on wasteful spending that serves to enrich private corporations at the expense of other vital domestic programs.

CODEPINK helps communities divest their dollars from the war machine by supporting divestment campaigns in cities, states, and universities across the United States. Making a killing on killing has no place in our public institutions. Learn more at www.divestfromwarmachine.org.

Put People Over the Pentagon and their compendium website herald the beginning of a growing call to hold presidential candidates accountable for creating a federal budget that prioritizes the needs of people over the wasteful spending habits of the U.S. military. The group’s statement can be read at https://peopleoverpentagon.org.