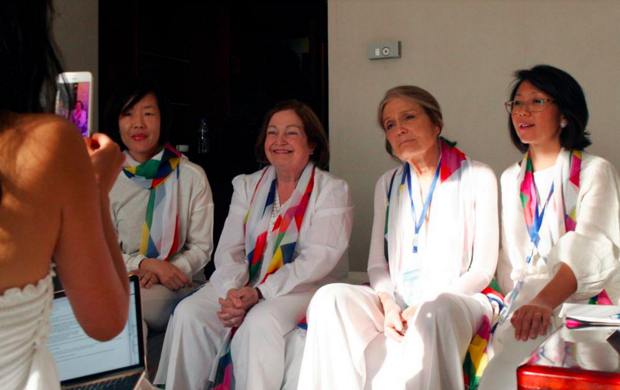 As violence around the globe feeds upon itself -- and feeds the coffers of the weapons manufacturers and “security” contractors -- it is time for the collective wisdom of women, not just a few elite women who accept the rule of state violence --  to take a seat at the peace table. CODEPINK is asking all candidates for President to adopt ten peace positions, of which number five is something not often spoken about: draw on women’s leadership in conflict negotiations to achieve lasting peace.

United Nations Security Council Resolution 1325 was adopted in October 2000 after studies showed that lasting agreements to end violent conflicts all had something in common: full participation by women. When UNSCR 1325 was adopted the UN announced:

The resolution reaffirms the important role of women in the prevention and resolution of conflicts, peace negotiations, peace-building, peacekeeping, humanitarian response and in post-conflict reconstruction and stresses the importance of their equal participation and full involvement in all efforts for the maintenance and promotion of peace and security. Resolution 1325 urges all actors to increase the participation of women and incorporate gender perspectives in all United Nations peace and security efforts.

You may think that it’s hard to come up with recent examples of lasting agreements to end violent conflicts. You might have to think back to the end of civil wars in Liberia in 2003 and in Northern Ireland in 1994, where women’s leadership led to durable peace for the people of those nations.

You would also be excused for not being able to recall any negotiations in the endless so-called “war on terror” that included women’s full participation.

Women have been taking peacemaking and citizen diplomacy into their own hands, outside of the official tribunals of government, for a long time. Here are two recent examples. An international group of women, including CODEPINK co-founders Medea Benjamin and Jodie Evans, walked the so-called (and studded with landmines) Demilitarized Zone between North and South Korea last year to call attention to the need for a permanent peace accord ending that 60+year-old ceasefire, and reuniting Korean families. An international group of women converged at a summit in Switzerland convened to negotiate a ceasefire in Syria in January, 2014. They were not invited to sit at the table and violence in Syria has escalated since, producing millions of refugees.

In Afghanistan, NATO, the Taliban and the Afghan government have all failed to include the minimum 50% female participation in talks to end war there, and Kabul is presently so unsafe that U.S. officials there travel only by helicopter, never using the roads.

One particularly tragic result of male-dominated thinking and foreign policy is the escalation of violence against women and girls in conflict zones.  Protecting women and girls from gender-based violence, particularly rape and other forms of sexual abuse, would be somewhat more likely if they were to be included in negotiations to end violent methods of governance, with justice for victims of sexual violence as part of the resolution of conflict.

When candidates vie for the right to head up U.S. foreign policy, they would be wise to look to UNSCR 1325 as a path forward amid escalating violence worldwide. The collective wisdom of women is a powerful, untapped force.

Peaceworkers Suzy Kim, Mairead Maguire, Gloria Steinem, and Christine Ahn at a press conference in Pyongyang, North Korea to kick off the women’s walk across the Demilitarized Zone that still separates North and South Korean families. More bombs were dropped on Korea from 1950-1953 than on all of Asia and islands in the Pacific Ocean in WWII.