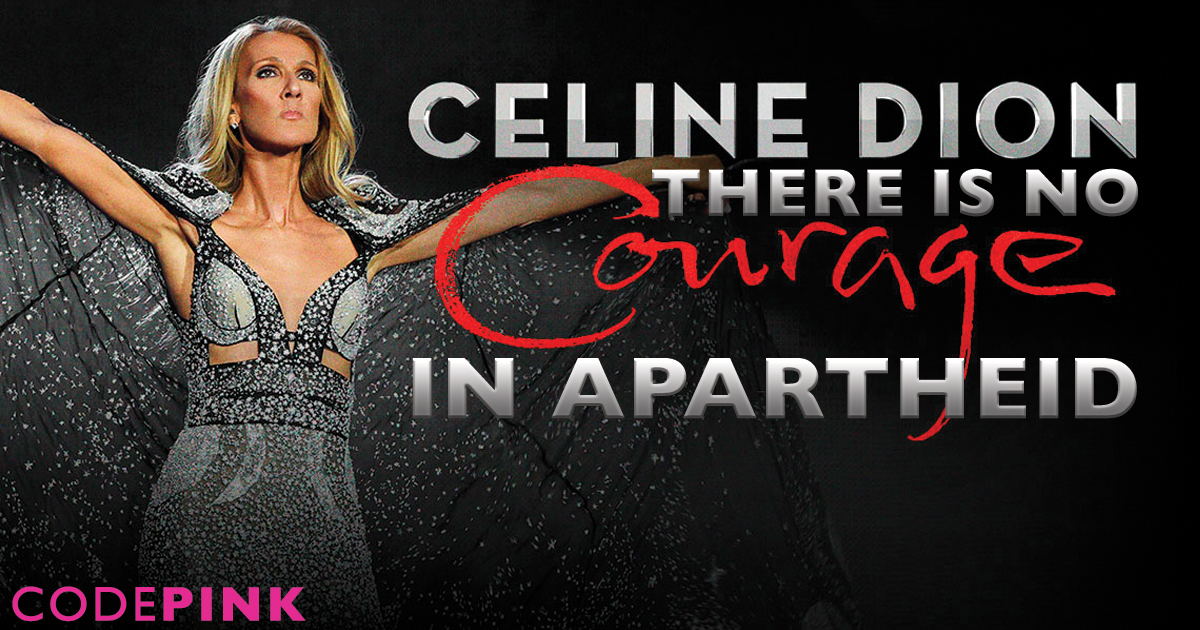 Israel just finished its third election and upon the release of the results, Prime Minister Netanyahu announced that "Arabs are not part of the equation [when it comes to counting election votes]." So why, given such vulgar racism, is Grammy award-winning singer Celine Dion—who named one of her sons after Nelson Mandela—planning to cross the picket line and perform in Tel Aviv this coming August?

Sign our letter to Celine Dion urging her to cancel her August 2020 concert in apartheid Israel. We will see that the petition is personally delivered to her.

The problem is not just that Celine is performing in Israel, but that her concert will take place in Yarkon Park. The park is built on top of the ruins of Jarisha village, which was completely depopulated (ethnically cleansed) in May 1948 just weeks after the notorious Deir Yassin massacre, where hundreds of Palestinians were brutally massacred. The Deir Yassin massacre and the ethnic cleansing of the Jarisha Village were part of the 1948 Nakba (meaning catastrophe), where 800,000 Palestinians were forcefully removed from their homes and lands to clear the way for the State of Israel to be established.

Add your name to our letter now. Tell Celine: Sing a song for Palestinian rights, don’t go to apartheid Israel!

We believe that Celine is reachable. Not only is one of her twin sons named after Nelson Mandela—Celine met Mandela in 2008 during a trip to South Africa—but fifty Palestinian musicians, actors, and artists have penned a letter to Celine. The letter asks the singer to heed the call by Palestinian civil society to boycott and divest from Israel—including by refusing to give musical performances—until freedom, justice, and equality is obtained for Palestinians.

Join the fifty Palestinian musicians, actors, and artists and countless people around the world asking Celine Dion to cancel her August 2020 performance at Yarkon Park in Tel Aviv, Israel. Add your name now.

“We know too well that our freedom is incomplete without the freedom of the Palestinians,” Mandala declared in December 1997. Help us remind Celine Dion of this truth.