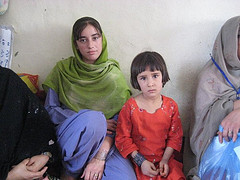 On our first full day out into Kabul, I saw an old woman being dragged across the street by two men. One of our delegates said she thought she saw the men kick the clearly resisting woman. This happened only a few blocks away from our meeting with Women for Women International, where they said if they would have seen the altercation they would have intervened. They claim to have educated 20,000 women since 2002 in vocational and civic training. They choose women who have been affected by conflict and have hit bottom. As the woman program director explained, women have rights in Islam and some Mullahs need to be taught. That is why she travels the country to train the Mullahs. There is a big difference between the cities and the rural parts of the country on a number of issues including women's rights.

At the meeting (at almost all our meetings) we are offered black or green tea and candies. Labor is cheap and many NGOs and the upper middle class have paid drivers, guards, cooks and house cleaners.

Some in our delegation got to talk with girls being trained to make jam and said that many of them wanted an end to war and for foreign troops to leave. 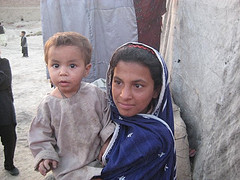 Next, we met with Dr. Sardar Wali of the Welfare Association for the Development of Afghanistan (WADAN). He headed their Drug Demand Reduction program. He said that about two million of the 30 or so million Afghans are addicted to hashish, heroin, opium, pharmaceuticals or alcohol. He claims that his programs have a 65% success rate. The gynecologist in our group points out that would be extremely high. He also asserted that 25% of police have tested positive for drugs.

Afghans get addicted just like Americans, but there were a few surprises. Mothers give opium to their babies to put them asleep, which allow the women to get more work done. Some Afghans go to Iran, or employers in Afghanistan give drugs to employees and tell them it will help them work. Then, when they get addicted the employers take advantage of them.

The men get treated in centers that we may consider prison-like with their all-cement construction and small rooms. Many shave their heads to help deal with the withdrawals and heat. Women are treated in the home. The facility was clean, their treatment is free and addiction is treated as a sickness not a crime - something many in the states could learn from.

For lunch, we had our first of many meals that would include rice, bread, kabob (beef, chicken and lamb), French fries and a plate of fresh veggies that we didn't touch for fear of getting sick. We spoke with two men from the Institute for War & Peace Reporting. They argued that America had messed Afghanistan up and needed to train more Afghan troops, stop bombing and arresting innocent people and negotiate with Taliban.

He echoed what many will tell me later: President Karzai is weak and historically controlled by the U.S., and the elections were a fraud. Under the Bush Administration, they said the American Ambassador pulled Karzai's strings and now the United States Special Envoy for Afghanistan and Pakistan, Richard Holbrooke, is acting as a king and dictates orders. Additionally, he claimed that six ministries "belong" to the U.S. Others have said that the more powerful countries in the coalition all have someone in a ministry that they have chosen as their area of influence. Finger-pointing at Pakistan is another theme that emerged. He thought that Pakistan is not serious about getting rid of Al-Qaeda.

Our last meeting before our dinner reception with Afghan elites was with the director of an NGO for war-affected children. 57% of the Afghanistan population is below 17 years old. In the capital city of Kabul alone there are estimated 60-70,000 street-working children. Street children work in the street for their own or their family's sustenance. They collect firewood or other fuel, beg, sell candy and magazines, etc. According to the NGO, life of children has become worse since the U.S. invasion. They get kidnapped, suffer drug abuse and sexual abuse. The director thought that a majority of Afghans don't support foreign forces, but they do think if they leave it may cause another civil war.

After a rest at our hotel, which is guarded with machineguns, we traveled to about 15 minutes away from the Taliban-controlled Wardock province to the house of a friend of one of our delegates. They organized a dinner reception with several Ministers, Deputy Ministers, Business Leaders and one of President Karzai's brothers. I'll tell you more about this fascinating evening in my next blog.

Please note that for security reasons, I will not discuss where we are staying or our itinerary, and may leave out or change the names of people we meet.