Packing up the Pink House

[caption id="" align="alignright" width="258" caption="Click on the photo to see a slideshow of Pink House and DC CODEPINK action photos!"] 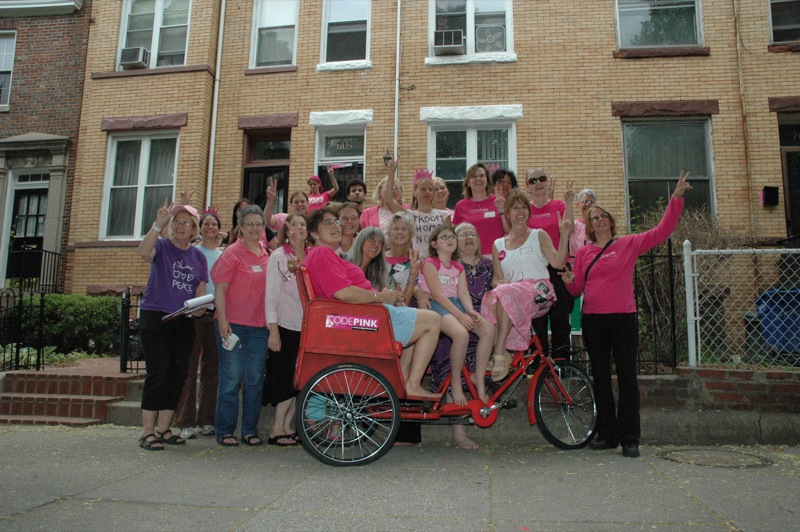 Three years ago, on March 1, 2007, we opened the doors to a brick townhouse in the northeast quadrant of DC and decided to call it home.  Little did we know in the years to come this 5-bedroom house near Capitol Hill would become a ground zero for CODEPINK activism in the halls of Congress.  It was weeks before the fourth anniversary of the invasion of Iraq and that spring Congress was set to vote on many billion more dollars for war.

Our message was simple, "Don't Buy Bush's War!" and our call out to you was clear, "Come to DC!"  And come you did, by the dozens, donating food and house wares and your hearts to shine in the dim halls of Congress.  Before long, our house was stuffed with stacks of pink towels and linens, multiple coffee makers to fuel late-night brainstorming sessions, Sharpies, and swaths of fabric.  You donated couches, daily delivery of the Washington Post, and hand-made bunk beds (constructed by a lovely fella from Indiana who drove 12 hours to build them) ready to be filled with activists.  Jacob from Tennessee built us our beloved flagstone patio.

A couple weeks after the house opened, Desiree Fairooz flew in from Arlington, Texas, with a small suitcase packed for two weeks stay, and ended up staying for two and a half years, taking on the role of Pink House Mama with joy, care, creativity, and more energy and passion for peace than can ever be described in writing!

For over two years the house was almost always filled to the brim with women (and men in the Peace Room basement) who came from all corners of the country to protest war and call for real change .  Women, like Terra from VA, who had never been to DC before came to the house to witness and take part in public vigils, and some, like Barbara from NH, found themselves standing up and speaking out in hearings.  Barbara was quoted later in the Washington Post saying, "I was a little bit shy, but by the end, I tell you, I was chasing those representatives down the hall!"

Pink House residents contacted their local news and got the press to write stories about their brave acts for justice in the nation's capital.  The house also hosted international delegations, such as Japanese and Italian women who protest US military base expansions.  Notable peacemakers like Van Jones, Ret. Col. Ann Wright, Gen Vaughn and Reverend Billy slept at the house.

We knew we were entering Washington DC lore when the front page of the Washington Post announced after the Alberto Gonzales hearing: "The Senate Judiciary Committee goes CODEPINK on Gonzales"! Going CODEPINK took on a new meaning: exposing the wrongdoings of the powerful, giving them a public dressing down, holding them accountable.

That is precisely what CODEPINK has been doing in DC all these years. We not only brought a flash of hot pink to the sea of drab gray and black Congressional suits, but we broke through the inside-the-beltway politics with a refreshing dash of people power.

[caption id="" align="alignleft" width="177" caption="CODEPINK has made headlines in papers around the world!"]

The buzz in the press continued when Roll Call ran a piece in May of 2007 on the house where Ann Wright remarked Pink House phenomena, "I hope [Members] are shaking in their boots."  Ann soon became a Pink House stalwart and wrote much of her book, Dissent: Voices of Conscience, from her laptop in the third floor bedroom.  The next month, Washington Post ran a story on the house, and the San Francisco Chronicle followed suit with a piece about us "pesky peaceniks" taking to the Hill and establishing a house in the beltway.  Congesswoman Lynn Woolsey was quoted in that article saying, "If it weren't for CodePink and groups like CodePink, we'd be a lot farther away from resolving the situation in Iraq."

In December of 2007, Roll Call reported, "CODEPINK has never been so red hot.  The mostly women’s anti-war group has moved from a fringe protest group into the mainstream, getting noticed by the White House and others as a political force du jour."

Since then CODEPINK actions have appeared in the photos and headlines of Roll Call regularly.  In 2008, the Washington Post released an excellent 5-minute video documenting the house and our work on the Hill with a great interview with CODEPINK cofounder Medea Benjamin.  Medea has fearlessly led groups of women through the halls of Congress day after day, and rarely misses a hearing.

CODEPINK also received widespread attention for actions outside of Congress, such as disrupting Hillary Clinton at campaign events or Shimon Perez at the annual AIPAC conference, and staging a floating blockade of Congressman Ackerman’s boat after he threatened to push for further sanctions on Iran.

But CODEPINK didn't count on the mainstream media to tell all the stories.  We created a Pink House blog, http://codepinkdc.blogspot.com/, to document the daily actions.  Pink House residents learned how to blog and share stories with the rest of the country.  We also released dozens of YouTubes at http://www.youtube.com/dontbuybushswar, and posted volumes of hot pink photos to our Flickr site.

The CODEPINK House has been a hub for brainstorming, networking, prop-making and song-writing. After late night strategy meetings, we have woken up early to head off to Congress to attend a hearing, sit-in at an office, hang a banner in the atrium, sing anti-war songs in the cafeteria or crash press conferences.

At the end of exhausting days, we have continued the work at the house by blogging, downloading photos, editing videos for YouTube, writing alerts to our international mailing list, and hosting a weekly activist potluck.  The CODEPINK house hosted mass gatherings of women annually for Activist Training Camps, the anniversary of the war, 4th of July, Mother’s Day, and the Obama Inauguration. 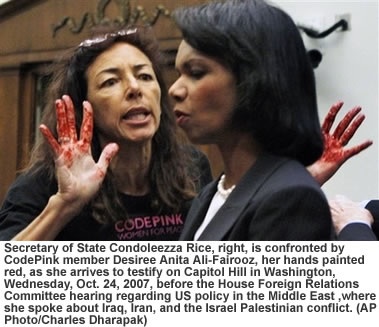 From holding up "LIAR" signs behind Condoleezza Rice and waving bloody hands in her face (go Desiree!), to confronting General Petraeus, to showing off an Impeach Bush T-shirt during Valerie Plame's testimony, holding pink signs speaking truth about the bailout behind the faces of AIG and Goldman Sachs execs and more, CODEPINK has transformed Congressional hearings from solemn gatherings attended by subdued staff aides, K Street lobbyists and a few curious tourists into truly public, participatory events.

In the summer of 2008, as the Bush era came to a close and activists around the country turned their attention to the upcoming presidential election traffic at the Pink House slowed down, and after the Inauguration, throughout Obama's first year in office in 2009, both because of the economic downturn and the shift in politics, with voters expectant and eager for Obama to make a change, activist guests slowed to a halt.  So we opened the doors at the house to ally organizations and group delegations, and hosted youth activists for green jobs conferences, young women from the Lower East Side Girls Club in NYC, faith-based groups and others.  Then we opened up the rooms to individuals who could help us cover the expenses and left one bedroom for visiting activists to stay.

The costs of maintaining the house and paying the rent have become an overwhelming burden for CODEPINK and we must now move on from the house into the next course of action.

We have declined our annual lease renewal, given notice to our wonderful landlady, and the house will close at the end of February.  DC activists Joan and Emily will be coordinating the moving - and it will be a hefty job!  All our banners, visuals, supplies, and the giant White House knitted cozy, will be kept safe.  But the physical pieces of the house can never contain the non-tangible memories we each have, and the mark we have made on history.  You can add your personal memory or story of the Pink House to our blog comments section below.  Let us know if there is some treasure you want us to save for when you arrive for the March events.  Sign up to join CODEPINK in DC in March here.

We’d like to say thank you, from the bottom of our pink hearts, to each and every one of you who contributed to the magic that was the Pink House.  Thanks to those who donated, processed applications, greeted new arrivals in DC, stormed the Hill, and reached out to their networks to grow the CODEPINK family.  The house was a bright idea, initiated by Xan Joi and other San Francisco activists, that would have failed had it not been for a surge of people who answered the call and supported the vision of ending war, creating peace, and restoring democracy.

If you would like to make a donation to CODEPINK in honor of the Pink House, click here .

Stay updated on DC actions by joining the Pink House Alumni group on Facebook, and checking our calendar regularly.

If you’re coming to DC, you can check out our housing board to find DC activists willing to host – Thanks to Lydia for managing Pink House applications and now taking on coordinating this housing board!

CODEPINK in DC will of course continue to be active in the hearings in Congress and will continue to call for and help coordinate national actions in DC, only now we'll be reaching out to our neighbors to house those of us visiting from out-of-town and coordinating shared stays at hotels.  There are many reasons to come to DC in March, including a national training and lobby day for justice in Palestine, the ANSWER mass march on the 7th anniversary of the Iraq occupation, the AIPAC convention protests, and the Peace of the Action coalition activities.

Sign up to join CODEPINK in DC in March here.

We hope to see you in DC soon!  Medea, Emily, Gael, Joan, and the DC CODEPINK team are waiting to welcome you!