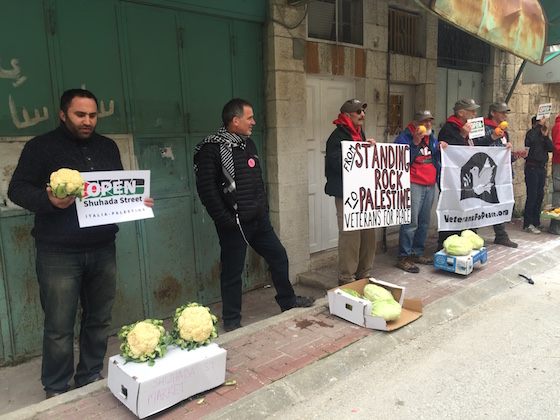 Yesterday in DC we protested outside the Israeli embassy, and in Hebron, Palestine, we joined Youth Against Settlements and Veterans for Peace to create a vegetable market on Shuhada Street, a street almost entirely closed to Palestinians since 1994. We held up cauliflower and yelled, “vegetables, vegetables one shekel a kilo. Cauliflower, all the way from Jenin. Come get the best cauliflower in Palestine.” Within about 10 minutes, Israeli soldiers arrived and declared the area a closed military zone, threatening arrest if we did not leave.

Tomorrow will be the 8th annual day of mass protest in Hebron to end the closures and restrictions against Palestinians that Israel put in place by Israel in response to the Ibrahimi Mosque massacre on February 24, 1994 when an Israeli settler opened fire in the mosque, killing 29 Palestinians in worship and injuring 125 more.

Support their struggle - Sign and Share the petition and participate in the social media day of action on Fri, Feb 24th. Post on Facebook and tweet between 1-3pm eastern time using the hashtag #OpenShuhadaSt to encourage more people to take action, get the attention of reporters, and demonstrate support to the Palestinian residents of Hebron. Join the Thunderclap now!

Use these sample tweets:

After 23 years of closures, restrictions, soldiers, and segregation it is time to #OpenShuhadaSt Sign the petition http://buff.ly/2m0ihxx

Support the Palestinian nonviolent struggle. Sign the petition to #OpenShuhadaSt in Hebron http://buff.ly/2m0ihxx

The closures, restrictions, and oppression that Palestinians will not stop on its own. That is why we are proud to partner with Youth Against Settlements for their annual Open Shuhada Street campaign. Help us support their struggle for equality and freedom by signing the petition and participating in the Twitter Storm.

Towards a better world,