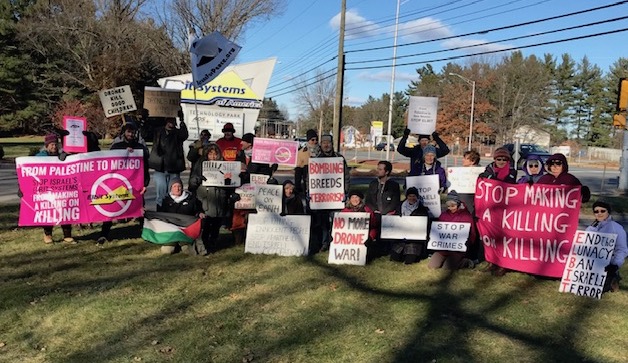 The New Hampshire Palestinian Education Network (NH PEN) and CODEPINK: Women for Peace sponsored a demonstration in front of Elbit Systems of America in Merrimack, NH, (220 Daniel Webster Highway) on Friday, December 7, 2018 to protest Elbit’s role in Israeli human rights violations against the Palestinian people. Elbit manufactures the unmanned air vehicles (“killer drones") which have been used against civilians in Gaza including the 2008-09 “Operation Cast Lead” and "Operation Protective Edge” in 2014 where some 3500 civilians were killed, including over 800 children. Israel used Elbit weaponized Hermes 900 drones during “Protective Edge” which murdered some 520 children in Gaza. In addition, Elbit sells cluster bombs to the Israeli military, weapons that are banned by most countries around the world. Weapons sales are 95% of its business.

U.S. Navy veteran Will Thomas of the NH Palestine Education Network stated that “Elbit is a reflection of the Israeli economy which essentially thrives on violence and repression in Gaza and in the Occupied Palestinian West Bank and elsewhere in the world.”

Founded in 1967 and based in Haifa, Israel, Elbit also specializes in military electronics, surveillance drones and security systems. Elbit's New Hampshire subsidiary, Kollsman, provides the sensors, cameras, high-tech radar surveillance systems and “Integrated Fixed Towers” situated along the Arizona border with Mexico. In 2014, Elbit’s contracts with the US Department of Homeland Security and Customs and Border Patrol totaled over $145 million. In 2017, another contract was given to Elbit for additional radar systems and “Fixed Towers” along the Mexico-Texas border. From Palestine to Mexico, Elbit is responsible for numerous deaths and large-scale repression.

“Jewish Voice for Peace Boston joins the UN officials, Human Rights Watch, Amnesty International, and B'Tselem in condemning Israel's use of deadly force in Gaza. Elbit is complicit in the deaths of more than 200 Palestinians in 2018; as of October, according to Amnesty International, at least 10,000 others were injured, including 1,849 children, 424 women, 115 paramedics and 115 journalists. Any elected official who accepts contributions from Elbit is also complicit in these deaths and injuries," added Elsa Auerbach of Jewish Voice for Peace Boston.

Ursula Rozum, CODEPINK Palestine Campaigns Coordinator commented: "Elbit profits go up every quarter. They are making a killing from the deaths in Gaza and from militarizing the desert in the Americas. These profits, basically blood money, go to their investors and to buy off Congress members. We are calling on all Congress members to reject campaign contributions from Elbit and all companies that profit from war and militarization."

New Hampshire senior US Senator Jeanne Shaheen has received at least $10,500 from Elbit Systems of America and over $300,000 from U.S. weapons manufacturers according to research provided by Open Secrets and the American Friends Service Committee “Investigate” Project. Following the vigil in Merrimack, activists visited Senator Shaheen’s Manchester office asking her to stop taking money from Elbit and any and all weapons-makers such as Boeing, Lockheed Martin and Raytheon. New Hampshir Representative Annie Kuster received $2000 from Elbit and $65,000 from other military contractors in 2018. Take Action calling on Shaheen and Kuster to reject future Elbit donations.

"Through the receipt of campaign contributions from Elbit Systems, Senator Shaheen is complicit in violations of international law and massacres of Palestinian civilians,” added Ariel Gold, CODEPINK National Co-Director. “Israel's separation wall, which Elbit is the main supplier of surveillance equipment for, has been declared illegal by the International Criminal Court. By manufacturing military equipment to be used in Gaza, Elbit is supplying the tools of war crimes. Senator Shaheen should place herself of the right side of history by ending her relationship with this manufacturer of repression and death." 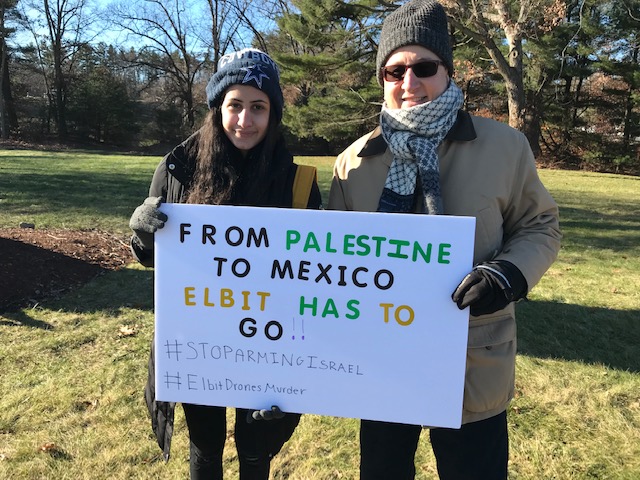 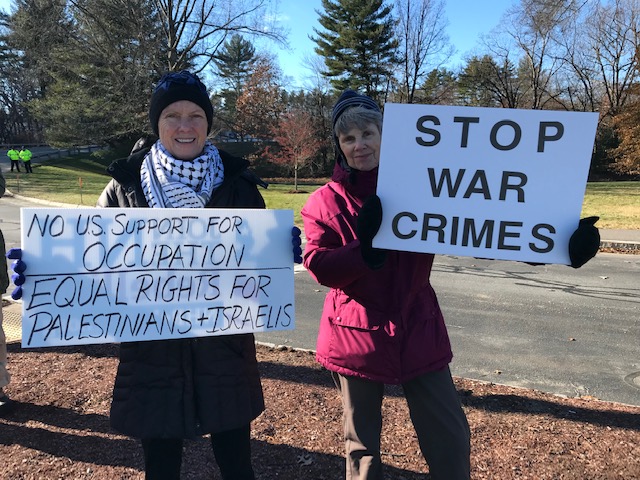 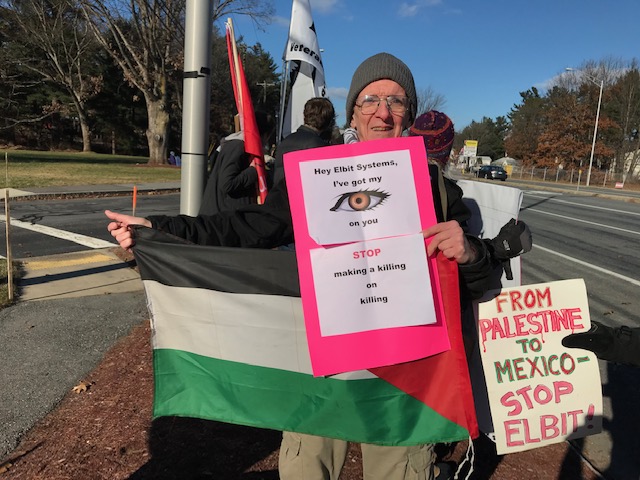