Today, on February 1, Israel finally delivered 5,000 COVID-19 vaccines to the West Bank for Palestinian medical staff. However, compare this to having vaccinated 3.1 million (33.4 percent) of the population inside Israel. Sounds unfair and like apartheid? It is.

Thanks to your emails and calls, a handful of members of Congress have already spoken out in condemnation of Israeli medical apartheid, for refusing to equitably share the COVID-19 vaccine with Palestinians. Rep. Marie Newman has been joined by Representatives Tlaib, Bowman, and Castro. “I’m disappointed and concerned by their government’s exclusion of Palestinians living under Israeli occupation from these vaccination efforts, despite making COVID vaccines available to Israeli settlers in the West Bank,” said congressional heavyweight Joaquin Castro. Even Senator Tim Kaine raised concerns during the confirmation hearing of Secretary of State Tony Blinken.

We need more. Email Congress now. Thank Newman, Tlaib, Bowman, Castor, and Kaine and tell their colleagues to join them. Even if you already took this action, take it again. Congress needs to know how vile medical apartheid is and that it is unacceptable for Israel to behave this way while receiving $3.8 billion a year from the U.S. 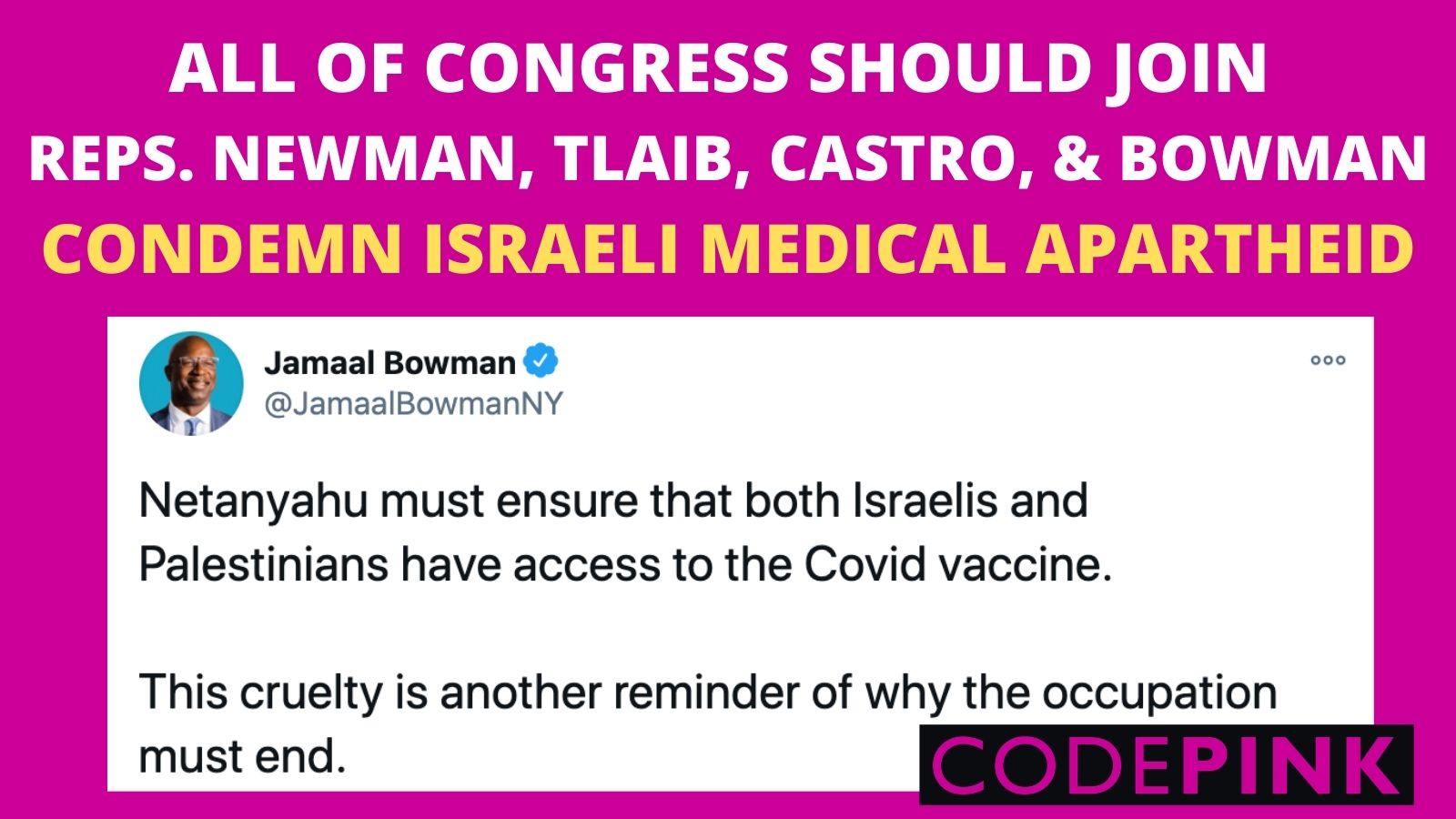 According to the Oslo Accords, the Palestinian Authority is solely responsible for the health care of Palestinians in the West Bank and Gaza. However, those deals were supposed to be part of a more complete peace agreement to be signed within five years. Almost three decades later, this larger peace agreement still hasn’t happened. Israel has entrenched its settlement enterprise occupation while flouting international law, which says clearly that an occupying power is obligated to meet the humanitarian needs of the people it is occupying.

Palestinians in the West Bank and Gaza are in dire need of the COVID-19 vaccine. On January 29th alone, the West Bank recorded 575 new cases. 1,823 people in the West Bank and Gaza have already died from the coronavirus. The situation in Gaza is particularly worrisome. Gaza suffers from up to 12 hours a day without electricity. Due to Israel’s air, land, and sea siege, as well as multiple military assaults on the crowded enclave, there is a severe shortage of medicine and medical equipment in Gaza, along with significant poverty and unemployment. Quarantining and maintaining sanitation in Gaza is extremely difficult.

Given the billions in military assistance the U.S. gives to Israel, Congress should be outraged. Email progressives in Congress now. Say thank you to those who have spoken out already and tell their colleagues to join them. Israel should be pressured to provide an equitable distribution of vaccine doses for Palestinians in the West Bank and Gaza.