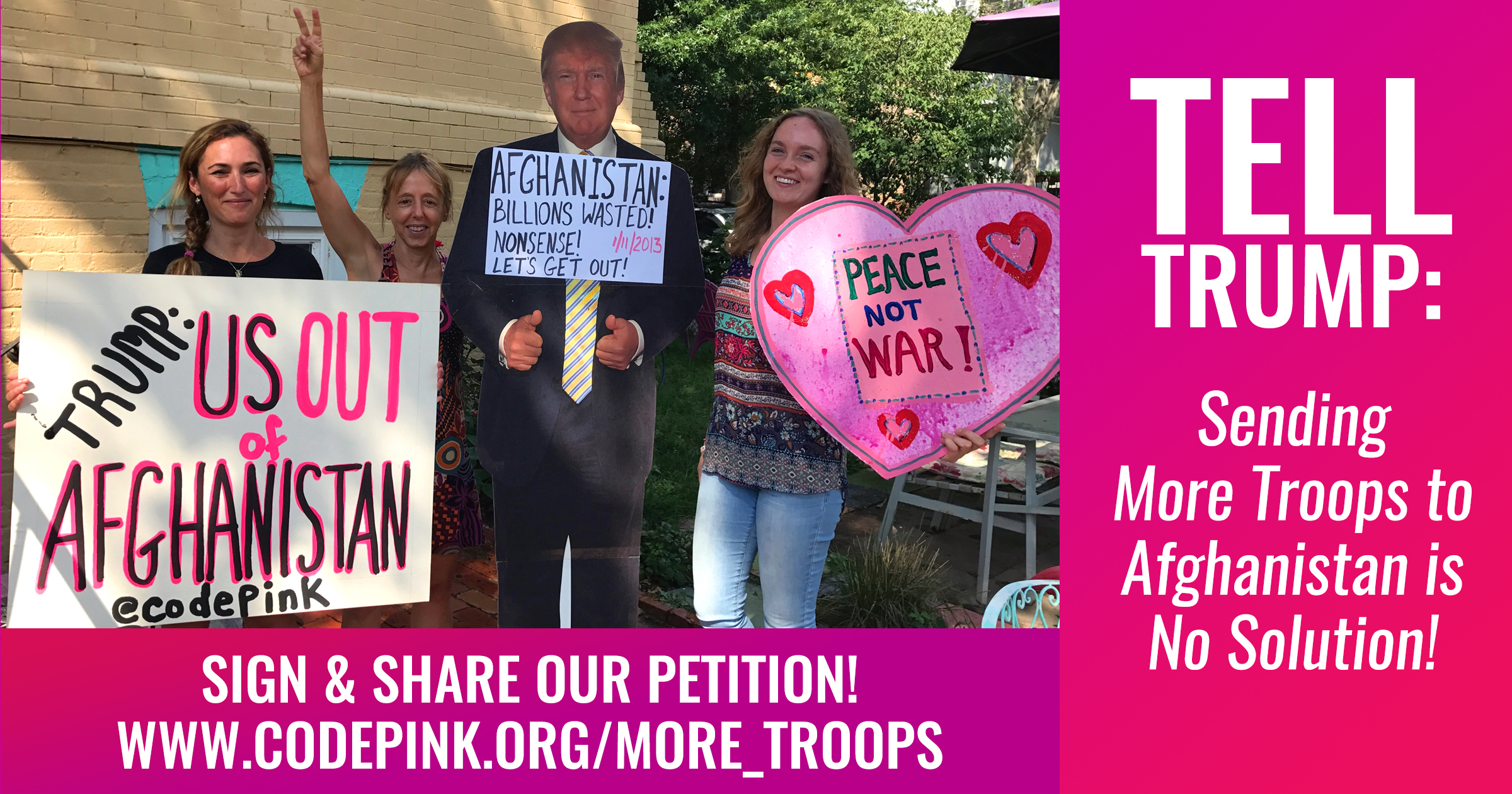 On January 11, 2013, Donald Trump sent a message over Twitter that said, “Let’s get out of Afghanistan. Our troops are being killed by the Afghanis we train and we waste billions there. Nonsense!” We agree.

Yet tonight, President Trump is likely to announce that his “new strategy” for Afghanistan entails sending thousands more US troops into harm’s way, in addition to the 8,400 US soldiers already there. Tell Trump: End US military intervention in Afghanistan.

US troops in Afghanistan are part of the problem, not the solution.Although the United States has invested $70 billion and 16 years in rebuilding the Afghan military, Afghan government forces control less than 60 percent of the nation’s territory. As long as US forces occupy Afghanistan, the Afghan government will always be dependent on outsiders to prop it up; opposition forces will always be fighting to rid the nation of foreign intervention; and the Afghan people will continue to suffer from the tragedy of decades of endless militarism.

US military intervention has cost us 2,300 dead service members and an additional 17,600 wounded, as well as trillions of dollars. Operations in Afghanistan cost us $4 million per hour, and that doesn’t even include any new troops or equipment.

Imagine what we could do with such massive amounts of money. We could hire tens of thousands of teachers, pay for Trump’s touted infrastructure promises, provide better care for our veterans, and furnish all Afghans with clean drinking water.

US intervention has resulted in large-scale corruption, with Afghanistan third from the bottom in international rankings, ahead of only Somalia and North Korea. Corruption in the military is infamous, with tens of thousands of “ghost soldiers” on the books so that higher-ranking military can steal their salaries—all on the US taxpayer’s dime. According to the Special Inspector General for Afghan Reconstruction John Sopko, these “ghost employees” exist in the ministries of education, health, public works, military and police.

The United States has spent $8.5 billion to battle narcotics in Afghanistan, but opium production there has reached an all-time high.We should have left a long time ago. All we’re doing now is protecting the government we put in place and engaging in skirmishes with those who attack it. President Trump is making the same mistake as both Republican and Democratic presidents before him, prolonging a war that has no likely positive outcome.

P.S. Spaces are still available in our August 26-27 Sonoma Valley Peace Camp, or join us in late October in Cuba!