Mistrial in Federal Court is a Win for Venezuela Sovereignty 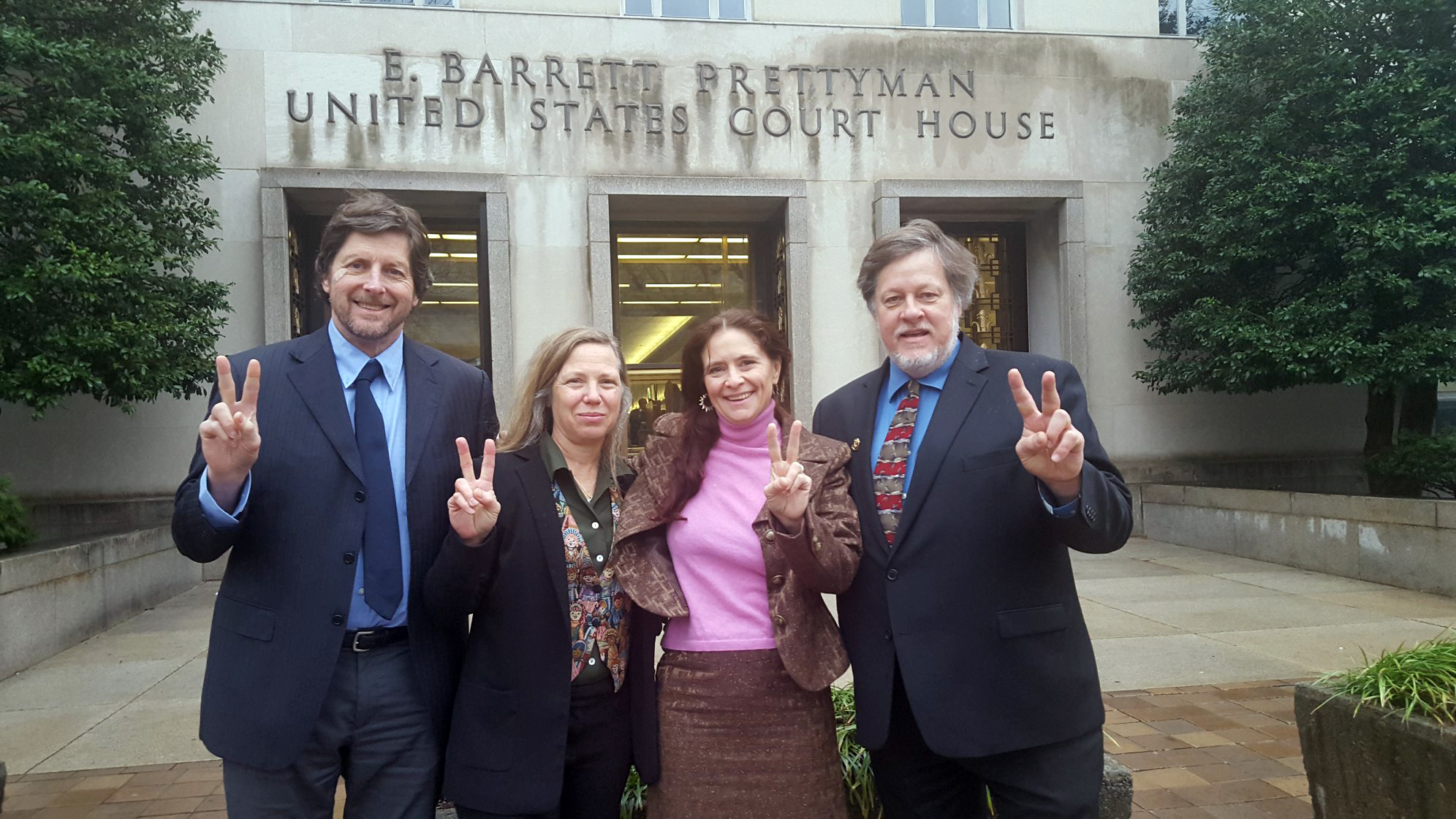 David Paul, Margaret Flowers, Adrienne Pine and Kevin Zeese outside of their courtroom in D.C.

A jury of 12 Washington D.C. residents were deadlocked over the issue of the embassy defenders on February 14, forcing the judge to declare a mistrial in a blow to the federal government, a judicial system that stacked the odds, and the “regime change” policies of the Trump administration. The embassy defenders - Adrienne Pine, Margaret Flowers, Kevin Zeese and David Paul - had been accused of “interfering with the protective functions” of the State Department after they, as part of the Embassy Protection Collective at the invitation of the Maduro government, had spent 37 days in the Venezuelan Embassy in Washington DC from April 11-May 16, protecting it from an illegal takeover by the U.S.-backed supporters of Juan Guaidó.

Chief Judge Beryl Howell overtly favored the prosecution by severely limiting the scope of the case, ruling that the defendants were limited to speaking only about events between May 13 and May 16. For context, the Embassy Protection Collective began staying in the building on April 11. All was peaceful until April 30, when coup supporters surrounded the Embassy and attacked the embassy protectors with physical and verbal abuse, as well as death threats, and were put under a joint siege by the police and coup supporters (the latter of which did all they could to prevent food from being delivered into the premises). On May 8 the electricity and water were cut off. On May 13, they received a trespass “notice” (a piece of paper with no official letterhead, signature or seal that was most likely written in Spanish and translated) and were asked – but not ordered – to leave the premises by police. On May 16, they were arrested, when, in violation of international law, federal agents in swat-style gear raided the Venezuelan Embassy.

The partiality on brazen display against citizens who are supposedly presumed to be innocent made it clear that the justice system was doing its best to ensure justice would be denied – a true kangaroo court. Its subservience to the Trump administration’s crazy attempt to install an unelected president made this a court that supports regime change and a coup: a kanga-coup court. That this trial resulted in a mistrial means that U.S. citizens saw through the farce, just as Venezuelans saw through the farce represented by Juan Guaidó.

In explaining that the U.S. constitution supposedly grants the president authority to recognize a foreign government, the judge defended this concept by claiming “elections mean something.” Those of us in the audience found it hard not to laugh out loud. Elections mean something, except when a U.S. adversary wins and the U.S. then decides to just name someone else president, as in the case of Venezuela. In a courtroom in which the judge had ruled that “Boliviarian” Republic of Venezuela was too confusing and therefore the country was to only be referred to as Venezuela, the “president” of Venezuela is Juan Guaidó and the question isn’t up for debate. This isn’t surprising, given that Guaidó recently attended the State of the Union, was applauded by Representative Nancy Pelosi and other “regime change” Democrats, met with President Trump, Vice President Pence, Secretary of State Pompeo, USAID administrator Mark Green, OAS Secretary General Almagro and had a 2-3 thousand people rally in Miami.

The reality, of course, is wildly different inside Venezuela. There, after his “successful” global tour, he was greeted at a rally by merely 500 people, which is actually a big improvement to rallies just a few months where he was cursing the fact that same dozen or two “jerks” were the only ones to show up to events. At the height of Guaidós’s popularity (roughly 2014-2015), the opposition drew massive crowds of tens of thousands. Pro-government rallies routinely turn out tens of thousands to hundreds of thousands. 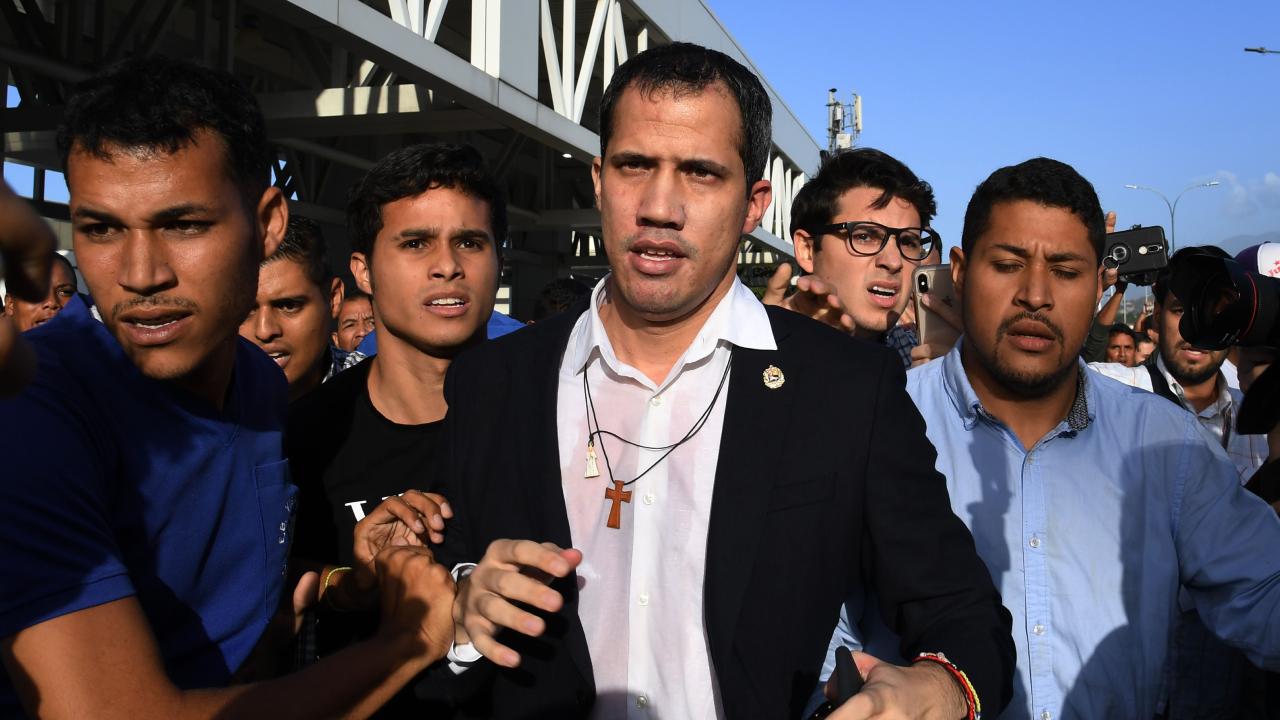 Juan Guaidó after being confronted by workers affected by sanctions in Venezuela. Photo: AFP

While Guaidó may have looked presidential during his U.S. tour, the façade was broken within minutes of landing in Venezuela. Airlines workers of Conviasa, which was recently sanctioned by Trump, confronted him at the airport, leaving him shaken and drenched in sweat—a “’president” afraid of his own people.

That Guaidó has fallen so low is an indictment of an extremist right-wing opposition that seeks to punish the working class by supporting sanctions, sabotage of basic services (last week a warehouse containing telecommunications equipment was set on fire, while the next day a Metro line was out of service after a cable line was cut), and threats of war.

The failure of Guaidó, the opposition and the Trump administration is also indicative of their incompetence and utter confusion regarding the reality of Venezuela. This incompetence mirrors the incompetence of the U.S. government in the sham trial of the embassy defenders.

Prosecutors attempted to pull a bait-and-switch on the jury, building their case on an allegation that the final four who were arrested at the Embassy were trespassing, while the actual charge was a misdemeanor of “interfering with protective functions.” At least some members of the jury were clearly perplexed by this, asking the judge for clarification of whether trespassing could be perceived as interfering.

Although the answer should have been a clear “no”, the judge obfuscated and left them more confused than before they asked the question. The jurors then brought up a seeming contradiction between the law and the judge’s instructions. The law regarding interfering with protective functions requires that alleged perpetrators “knowingly and willfully” interfered, while the judge instructed the jury that the defendants did not have to have knowledge of the statute in order to be convicted. One observer characterized the judge’s response to the jury on this issue as “a riddle.”

A bewildering judge and a bumbling prosecution led to a deadlocked jury. Three jurors voted to acquit, and they must be praised for recognizing that the government was trying to railroad the defendants. It offers proof that people of conscience can thwart a government intent on criminalizing peace activism. We should also recognize the defendant’s four lawyers, who managed to instill reasonable doubt against all odds.

The Embassy Protection Collective (EPC) brought people’s power to Washington, and it was only fitting that it was people’s power on the jury that led to a mistrial. Unfortunately, the mistrial is not quite the end of this ordeal. The final four have one last status hearing to determine if the prosecution will retry the case. David, Margaret, Kevin and Adrienne are deserving of our full solidarity and support. For me, as a Venezuelan who has spent the past dozen years helping my country fight U.S. imperialism, these four people, as well as the entire Embassy Protection Collective, have earned them my gratitude and admiration. It has also left me hopeful and inspired that we can build a movement in the United States to challenge a foreign policy of war and profits, replacing it with one of peace and dialogue.