Decry the Merchants of Death 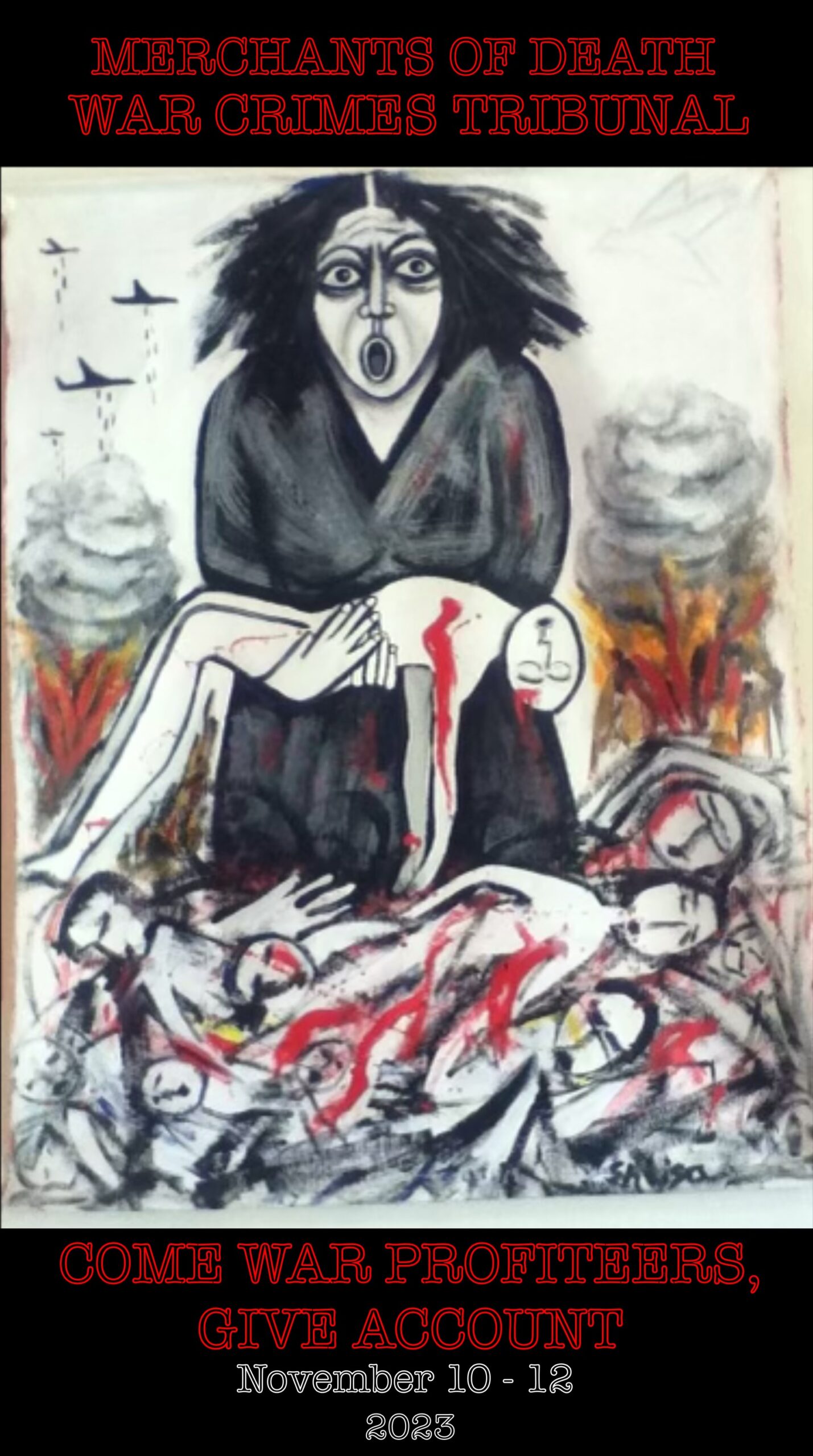 Peace activists take on the Pentagon and its corporate outposts.

Days after a U.S. warplane bombed a Doctors Without Borders/Médecins Sans Frontières (MSF) hospital in Kunduz, Afghanistan, killing forty-two people, twenty-four of them patients, the international president of MSF, Dr. Joanne Liu walked through the wreckage and prepared to deliver condolences to family members of those who had been killed. A brief video, taped in October, 2015, captures her nearly unutterable sadness as she speaks about a family who, the day before the bombing, had been prepared to bring their daughter home. Doctors had helped the young girl recover, but because war was raging outside the hospital, administrators recommended that the family come the next day. “She’s safer here,” they said.

The child was among those killed by the U.S. attacks, which recurred at fifteen minute intervals, for an hour and a half, even though MSF had already issued desperate pleas begging the United States and NATO forces to stop bombing the hospital.

Dr. Liu’s sad observations seemed to echo in the words of Pope Francis lamenting war’s afflictions. “We live with this diabolic pattern of killing one another out of the desire for power, the desire for security, the desire for many things. But I think of the hidden wars, those no one sees, that are far away from us," he said. “People speak about peace. The United Nations has done everything possible, but they have not succeeded.” The tireless struggles of numerous world leaders, like Pope Francis and Dr. Joanne Liu, to stop the patterns of war were embraced vigorously by Phil Berrigan, a prophet of our time.

“Oppose any and all wars,” he urged. “There has never been a just war.”  “Don’t get tired!” he begged people, adding, “I love the Buddhist proverb, ‘I will not kill, but I will prevent others from killing.’ ”

People who’ve embraced his message continue meeting at the Pentagon, as happened December 28 when activists commemorated the “Feast of the Holy Innocents.” Christians traditionally dedicate this day to the remembrance of a time when King Herod ordered the massacre of children under two years of age because of a paranoid belief that one of the recently born children in the region would grow up to oust Herod from power and kill him. Activists gathered at the Pentagon held signs decrying the slaughter of innocents in our time. They’ll protest the obscenely bloated military budget which the U.S. Congress just passed as a part of the Consolidated Appropriations Act of 2023.

As Norman Stockwell of The Progressive recently noted, “The bill contains nearly $1.7 trillion of funding for FY2023, but of that money, $858 billion is earmarked for the military (‘defense spending’) and an additional $45 billion in ‘emergency assistance to Ukraine and our NATO allies.’ This means that more than half ($900 billion out of $1.7 trillion) is not being used for ‘non-defense discretionary programs’—and even that lesser portion includes $118.7 billion for funding of the Veterans Administration, another military-related expense.”

Outraged by the reckless slaughter of innocent people in wars ranging from Vietnam to Afghanistan, Phil Berrigan insisted that weapons manufacturers profiting from endless wars should be held accountable for criminal activity. The weapons corporations rob people, worldwide, of the capacity to meet basic human needs..

The appallingly greedy Pentagon budget represents a corporate takeover of the U.S. Congress. As the coffers of weapons manufacturers swell, these military contractors hire legions of highly paid lobbyists tasked with persuading elected officials to earmark even more funds for companies like Lockheed Martin, Boeing, Raytheon United, and General Atomics. According to militarists, stockpiles of weapons must be used up, in order to justify more weapons manufacturing. Media complicity is necessary, and can be purchased, in order to frighten U.S. taxpayers into the continued bankrolling of what could become worldwide annihilation.

Phil Berrigan, who in his lifetime evolved from soldier to scholar to prophetic anti-nuclear activist, astutely linked the racial oppression he opposed as a civil rights activist to the rising oppression caused by militarism. He likened racial injustice to a terrible hydra that contrives a new face for every area of the world. Throughout his life, Phil Berrigan identified with people menaced by the hydra’s new faces of war. Elaborating on this theme in a book called No More Strangers, published in 1965, he wrote that the dispassionate decision of people in the United States to practice racial discrimination made it “not only easy but logical to enlarge our oppressions in the form of international nuclear threats.”

How can we in the United States prevent the killing that goes on, in our name, in multiple wars, exacerbated by weapons made in the U.S.A? How can we resist the growing potential, acute scourge of a nuclear exchange as warring parties continue issuing nuclear threats in Ukraine and Russia?

One step we can take involves both political and humanitarian efforts to hold accountable the corporations profiting from the U.S. military budget. Drawing on Phil Berrigan’s steadfastness, activists worldwide are planning the Merchants of Death War Crimes Tribunal scheduled to be held November 10 to 13, 2023. The Tribunal intends to collect evidence about crimes against humanity committed by those who develop, store, sell, and use weapons to commit crimes against humanity. Testimony is being sought from people who’ve borne the brunt of modern wars, the survivors of wars in Afghanistan, Iraq, Yemen, Gaza, and Somalia, to name but a few of the places where U.S. weapons have terrified people who’ve meant us no harm.

“We render you, corporations obsessed with war profiteering, accountable; answerable!,” declares the Reverend Dr. Cornel West on the Tribunal’s website.

On November 10, 2022, organizers of the Merchants of Death War Crimes Tribunal and their supporters served a “subpoena” to the directors and corporate offices of weapons manufacturers Lockheed Martin, Boeing, Raytheon United, and General Atomics. The subpoena, which will expire on February 10, 2023, compels them to provide to the Tribunal all documents revealing their complicity in aiding and abetting the United States government in committing war crimes, crimes against humanity, bribery, and theft.

People menaced by the hydra’s new faces of war often have nowhere to flee, nowhere to hide. Thousands upon thousands of the victims are children.

Mindful of the children who are maimed, traumatized, displaced, orphaned, and killed by all of the wars raging today, we must hold ourselves accountable as well. Phil Berrigan’s challenge must become ours:  “Meet me at the Pentagon!” Or at its corporate outposts.

Humanity literally cannot live in complicity with the patterns that lead to bombing hospitals and slaughtering children.

This article is posted at The Progressive.org; a shorter version appears on the World BEYOND War website.

Kathy Kelly ([email protected]) helps plan the Merchants of Death War Crimes Tribunal (merchantsofdeath.org); she is board President of World BEYOND War and a co-coordinator of BanKillerDrones.org