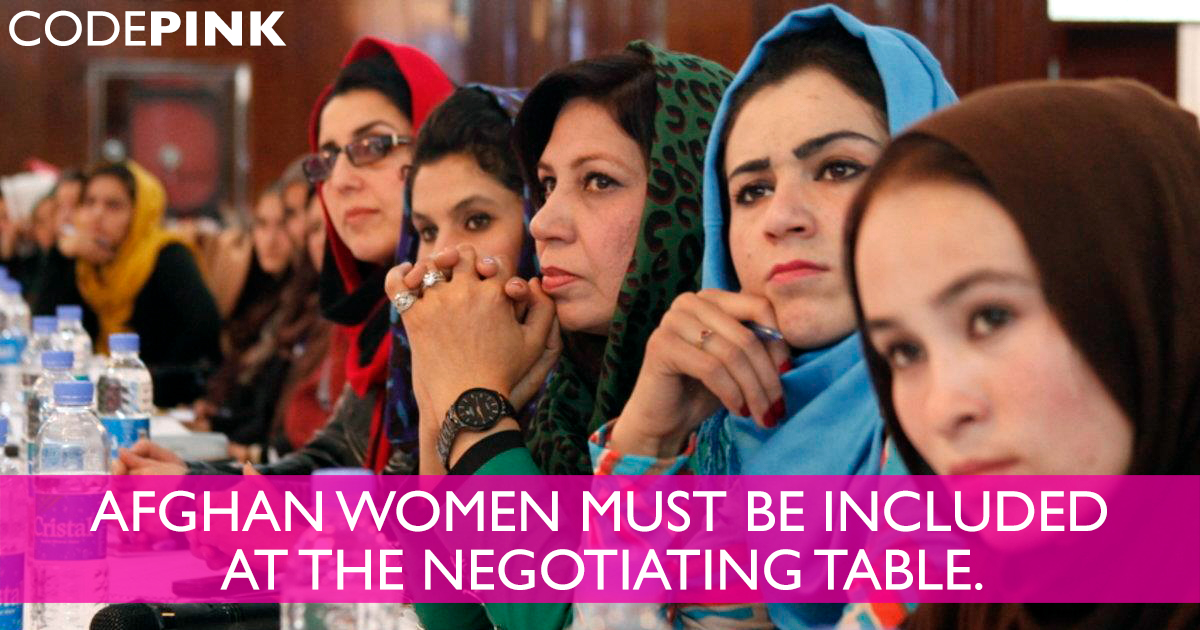 Although fraught with uncertainties, we are encouraged by the US agreement with the Taliban that could lead to the withdrawal of U.S. troops from Afghanistan in 14 months. Now comes the next phase: talks between the Afghan government and the Taliban. A key component of these talks has to be the inclusion of women so that women’s rights will be protected.

Afghan women should have been at the table for the U.S.-Taliban talks, but they were not. History has shown that women stand to lose the most from deals made behind closed doors with rooms full of men.

Sign this call to support the Afghan women who are calling for a seat at the negotiating table.

The dire repression of Afghan women under the Taliban served as one of the justifications for the U.S. war in Afghanistan. Since the overthrow of the Taliban, Afghan women have certainly made gains in terms of education and access to employment, particularly in the cities, but they have also been tragically affected by the war. Every time we traveled to Afghanistan, we met women who had lost their husbands or children in the fighting, and desperately poor single mothers trying to feed their children. This war, along with the Soviet war before it, have meant that women have been coping with the disastrous effects of violence for decades. That’s why the female members of the High Peace Council collected 300,000 signatures calling an end to the fighting.

Throughout these years, they have also been fighting for their rights. Facing tremendous obstacles and sacrifices, they have secured many hard-won legal rights in their constitution. That must not be sacrificed.

A group of Afghan women, including members of the Afghan Women’s Network, sent this message about the peace process:

Afghan women are desperate for an end to the violence and a durable peace, but we fear that negotiators will trade away our rights for a deal.

We know from previous experience that without a seated, elected, inclusive government based on the results of the elections, this peace deal will be little more than a division of power and resources among the Taliban, the warlords and the political strongmen.

The new U.S.- Taliban agreement and the ensuing intra-Afghan negotiations must address our rights in specific terms, not broad generalizations. Preserving the constitutional rights of women and all Afghan citizens must be a non-negotiable demand on the agenda of every political party and group.

Any peace deal, if it is to succeed, will have to include the protection of our human and civil rights, including freedom of speech and religion, the right to assembly, protection for our human rights defenders, and a mechanism of restorative justice for the hundreds of thousands of victims of this long war.

Afghan women are not asking anyone to grant us our rights. Our rights are clearly enshrined in our country’s constitution, our national laws, international law and sharia law. Our message to Mr. Haqqani and other Taliban negotiators is simple: Our rights are guaranteed, and we have a right to sit at any table you do.

We at CODEPINK are in solidarity with our Afghan sisters and we know it is critical that their voices be front and center right now. Sign the letter in support the Afghan women who are calling for a seat at the negotiating table.

Over the past ten years, since the United Nations began systematic documentation, over 100,000 Afghans have been killed or injured. There is not a single Afghan citizen who has not had their life affected by the ugly and brutal war, including the constant barrage of U.S. bombs. Now that there finally, FINALLY might be a path towards ending the war, let us do all that we can to see that the Afghan people, including the women, are able to heal and rebuild in the most peaceful way possible.

Towards an end to two decades of war in Afghanistan,

Afghanistan deal: Don't trade away women's rights to the Taliban. Put us at the table

Afghanistan Talks: No Women, No Peace