Let’s Pull Our Money from the Weapons Lobby 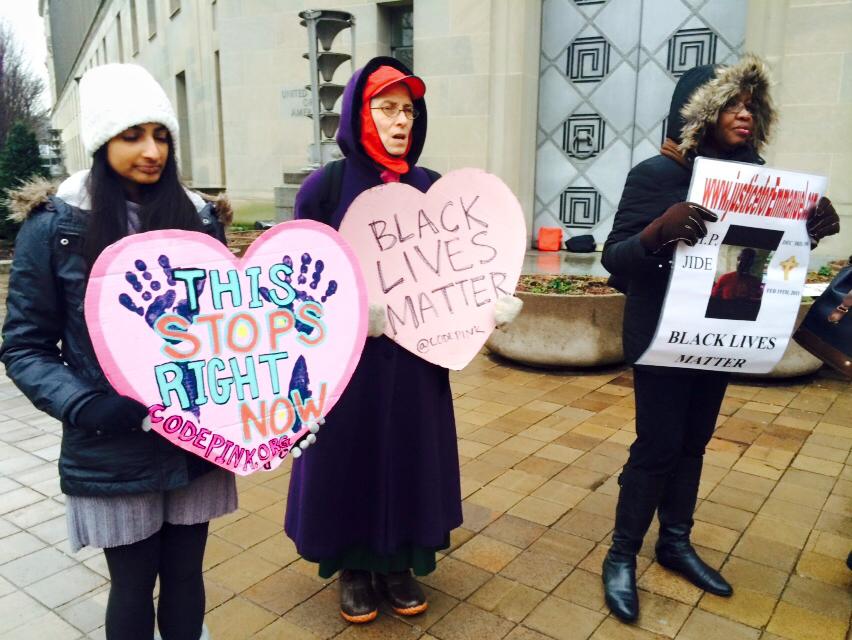 In the aftermath of the terrorist attack on Charleston’s AME Church, a shooting that took nine black lives, President Obama took the stage yet again to address the nation on the issue of gun violence:

"At some point, we as a country will have to reckon with the fact that this type of mass violence does not happen [with this kind of frequency] in other advanced countries. And it is in our power to do something about it. I say that recognizing the politics in this town foreclose a lot of those avenues right now."

The ‘power’ the President is referring to is the support that a vast majority of Americans share for common sense gun laws. This ‘power’ should influence Congress to heed the President's calls for reform. But the reality is, Congress won’t be moved by public opinion. Could a direct approach to weapons makers be more effective?

For the last 13 years, CODEPINK has embodied a non-violent, creative spirit working against militarism and weaponized violence - from the wars raging on overseas to the escalated tactics employed by law enforcement in our streets. Exposing the key players including the weapons manufacturers and Wall Street investors who make billions off endless war has proven effective, but it’s time to deepen this commitment.

The NRA - whose mission to support the weapons manufacturers’ profits supersedes any moral obligation - has transformed millions of dollars in contributions from the gun industry into huge legislative victories. Fear of political retribution and funding cuts have hampered necessary gun-violence research initiatives. In the early 1990s, the NRA began wielding its influence over the Center for Disease Control (CDC), calling research on guns pointing to linkages between injuries and ownership “propaganda”. This July, Congress again blocked a measure that would have allocated funding to the to research gun violence. In defense of the block, House Speaker John Boehner (R- OH) argued that the role of the CDC is protecting public health, saying “a gun is not a disease” and “guns don’t kill people — people do”. But in the United States, people certainly do kill people with guns.

In 2015 (so far), over 6,000 injuries have occurred as a result of gun violence, with more than 2,000 shootings involving an law enforcement agent. The mounting pressure for significant action follows the 590+ deaths to date committed by police, with black people targeted at a significantly higher rate than others. And while political agency and voting power are stripped from millions of Americans by voter suppression initiatives, activists are looking to broader strategies beyond electoral organizing.

Dismantling power starts with recognizing the source of existing powers. A small number of well-funded extremists hold an iron grip on Congress, with the almighty dollar trumping public opinion. Gun reform advocates must seek to disarm those extremists by targeting their source of power that lies within the $12 billion-a-year gun industry itself. What reason do we have to support these industries whose products destroy lives, especially as their profits serve to greater leverage power within Congress? Beyond the purchasing of weapons, and without the consent or even knowledge of most people, millions of dollars are pumped into the gun economy through retirement portfolios, university endowments and public pension funds. Participation in the divestment strategy could circumvent the inactivity of Congress bought and paid for by the NRA and its supporters, while freeing capital to fuel new, life-affirming initiatives.

Divestment efforts are already underway drawing negative attention to the weapons industry as bad corporate actors.  401Ks in the US alone account for nearly $2 billion worth of shares in three leading gun and ammunition producers. The Campaign To Unload has helped over 10,000 Americans uncover the truth about their retirement portfolios.

Universities also present a huge opportunity for divestment with billions in endowments tied up in weapons stock. Moved by the student-killing-students massacre at UC Santa Barbara, students across the country have embraced this strategy, running divestment initiatives, and even waging protest against large retailers profiting from the sale of automatic weapons.

When Tucson, AZ Representative Gabby Giffords was shot and profoundly injured in an attempted political assassination that injured 17 and killed 6 including a child, Arizona Congressman Jeff Flake rushed to her bedside and prayed for her recovery. Six months later, Flake voted down a measure that would have expanded background checks for gun buyers -- which might have prevented the horrific shooting in the first place.

In calling Christians with investments in the weapons industry ‘hypocrites,’ Pope Francis said it best: "duplicity is the currency of today ... they say one thing and do another." The time is ripe for theists and nontheists alike; when action means everything, we should put our money where our mouths are and divest to REinvest with a moral conscience. Divestment can succeed where empty words of sympathy never will.