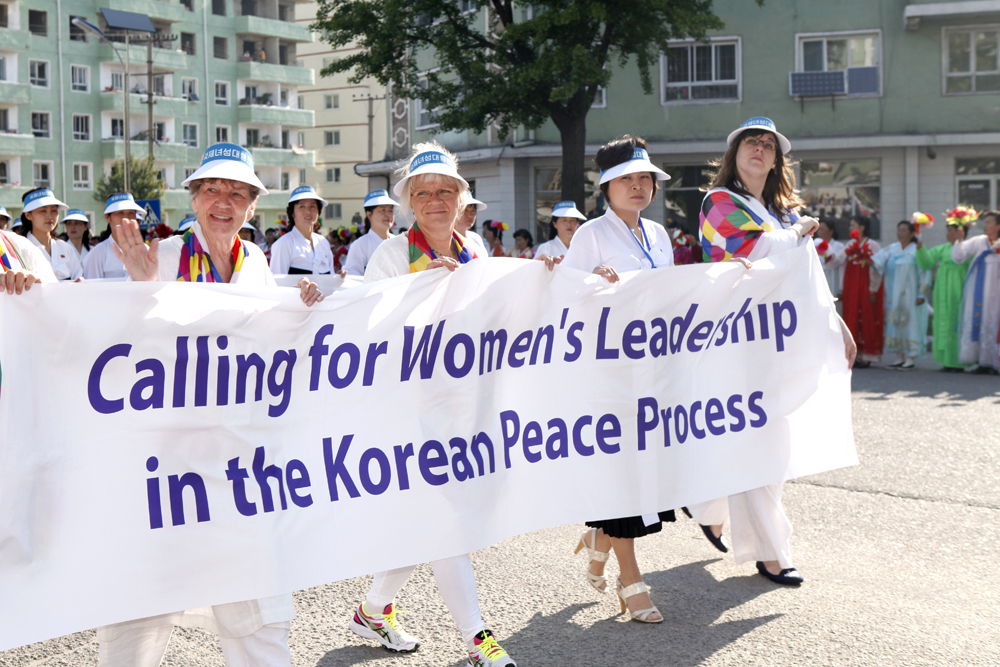 In May 2015, Christine Ahn invited Jodie, Medea and I to join the historic 30 woman group Women Cross the DMZ to go to North Korea and South Korea to discuss with women in both countries peace on the Korean peninsula.  Now, on January 16, 2018, as Foreign Ministers from twenty nations, including women Foreign Ministers from Canada, South Korea, Sweden, Norway, India, Australia, Colombia and South Africa gather in Vancouver to discuss security and stability on the Korean Peninsula, an international delegation of 16 women representing feminist peace movements from Asia, Europe, and North America will convene in Vancouver to ensure that civil-society perspectives are included in the official talks. The women's delegation is organized by Women Cross DMZ, Nobel Women's Initiative, Canadian Voice of Women for Peace, the United Church of Canada, and Women's International League for Peace and Freedom.

If you live in Vancouver/Seattle, please join us for these events:

Monday, January 15: Join us at 7:00pm for a Candlelight Vigil for Peace in Korea as our 16-woman delegation attempts to talk with the Foreign Ministers of the UN Command Korea countries—for diplomacy, not war on the Korean peninsula!!

Tuesday, January 16: Join us from 8-9:30am at our Witness for Peace event to greet with flags and banners for diplomacy and peace outside the Foreign Ministers Summit in Vancouver, BC, Canada. 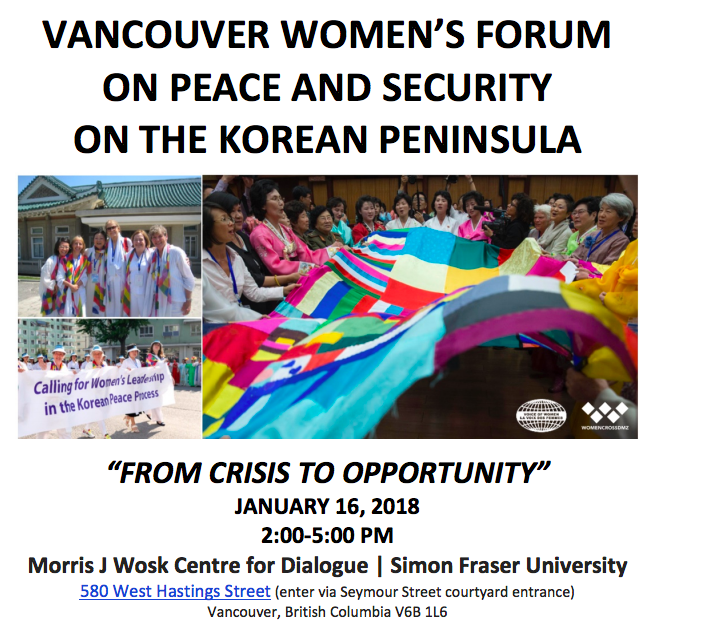 The objective of the women’s peace delegation is to urge the Foreign Ministers to prepare the table for a diplomatic peace process that moves away from war and increased militarization, and towards peace, reconciliation, and genuine security. Through the Vancouver Women’s Forum and other actions, the women delegates will remind government leaders of overwhelming global public opinion that favors a peaceful diplomatic resolution as the only option on the table for resolving the Korean crisis. The outcome of the official summit must support the recent breakthroughs in inter-Korean rapprochement, not derail it.

Members of the international women’s peace delegation arrive in Vancouver at a remarkably timely moment for raising these issues. Occurring soon after Canada launched its National Action Plan on Women, Peace and Security, this Summit provides an ideal opportunity for Canada to put its newly enacted Feminist Foreign Policy into action by heeding the counsel of the women’s peace delegation and including them in the official discussions, as endorsed by 217 civil-society organizations from all over the world.

At this momentous juncture in Vancouver, the international women’s peace delegation will call upon the Foreign Ministers to pursue a comprehensive and lasting resolution to the longstanding conflict. They will share their experience, knowledge, and wisdom garnered from their efforts working towards achieving peace and genuine security on the Korean Peninsula. Drawing upon their collective expertise on militarism, nuclear disarmament, economic sanctions, and the human, social, and ecological costs of the unresolved 65-year Korean War, the delegation will recommend steps that can ensure a lasting peace on the Korean Peninsula.

While the Foreign Ministers represent most nations of the UN Command that fought and provided humanitarian assistance during the 1950-53 Korean War, the delegates represent a wide range of civil-society organizations and social movements in South Korea, Japan, Guam, Sweden, United States, Canada, and globally. Learn more at: www.womencrossdmz.org/vancouver