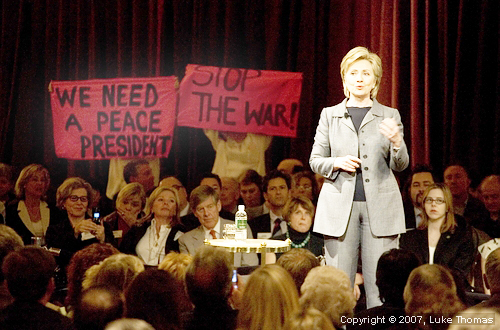 We are less than ONE WEEK from the Iowa caucuses and just over a week from the New Hampshire primary where the first votes of the election season will be cast in support of the future America wants to see. We know our demands – we want a #President4Peace – and now we need your support to bring energy, life and a whole lot of PINK to amplify the message.

CODEPINK’s history of bird-dogging presidential candidates includes singing vaginas at the 2012 Republican National Convention, glitter-bombing Tim Pawlenty, and staging a GOP Candidate Breakfast by oil tycoons Halliburton where we rolled in the dough they were throwing at the election. And bird-dogging Hillary Clinton is like deja vu all over again – we've been doing it for years, all the way back to our “Listen Hillary” campaign… Creativity and fun can go a long way to drive messaging and make a splash!

With Donald Trump dominating media time, we decided to crash his party in Vegas to Stop the Hate, pushing thousands of people to sign the petition at StopHateDumpTrump.com. We want to keep the pressure on Trump, and all candidates from both parties, as we amplify our message of peace: Arms are for hugging! – Let’s defund the Pentagon to ensure healthcare, housing, education, infrastructure and equal opportunity for everyone!

TAKE ACTION: Continue to use our social media guide to turn Twitter and Facebook into your own bird-dogging platform using the #President4 Peace hashtag and our peace platform.

And time to take our message straight to the candidates! If you’re inspired to start and want to organize a bird-dogging event in your community, email [email protected].

For peace and justice,

P.S. If you’re interested in joining us at the Democratic and/or Republican National Conventions this summer, sign up here!