Jodie Evans: Why I was arrested 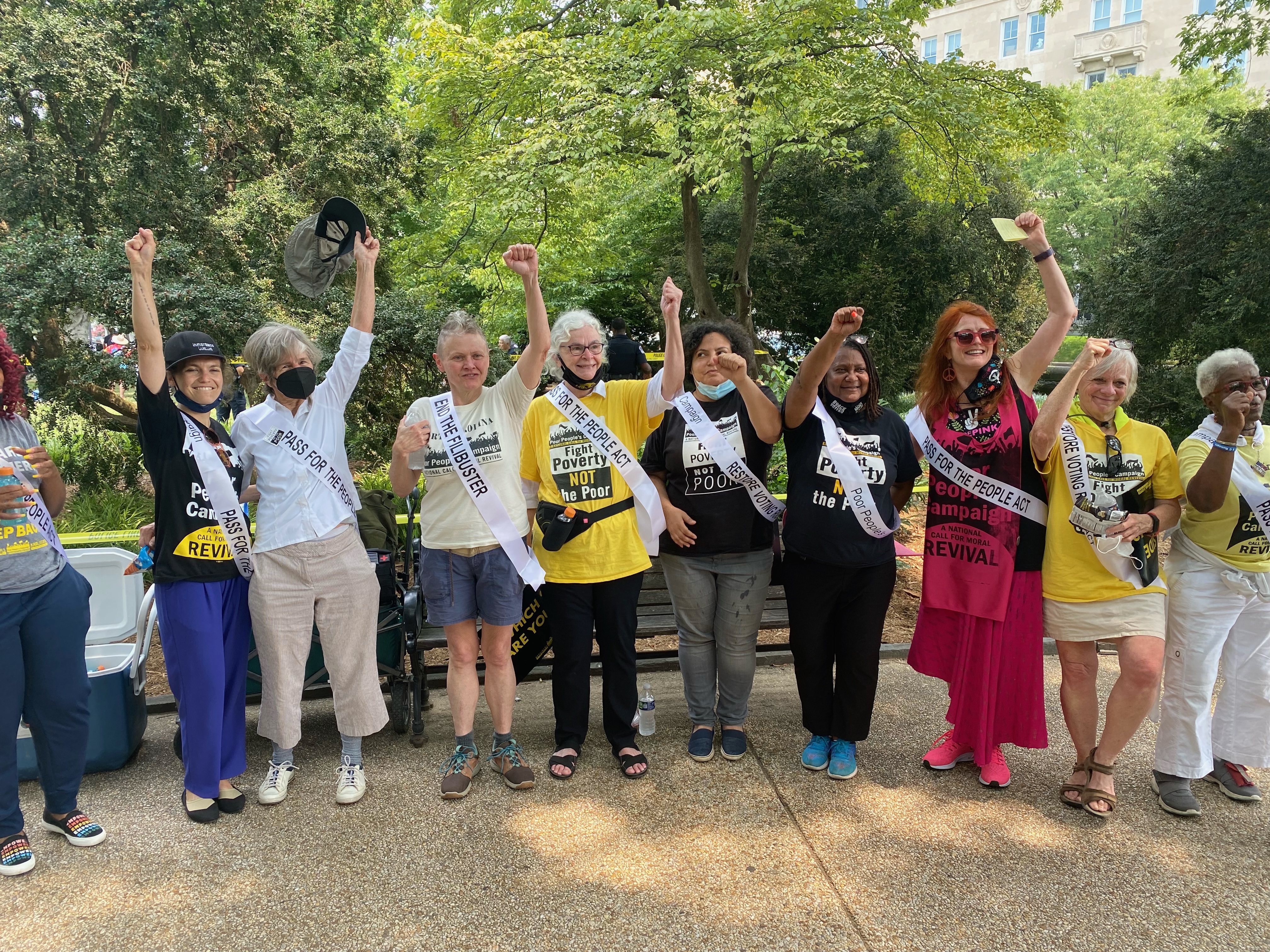 On Monday, June 19th I flew to Washington, DC to join the CODEPINK team of Medea, Ally and Olivia and 100 other women who were risking arrest. This was part of the Moral Mondays of The Poor Peoples Campaign; A Call for a Moral Revival.  This one fell on the on the anniversary of the 1948 Seneca Falls Women’s Convention. 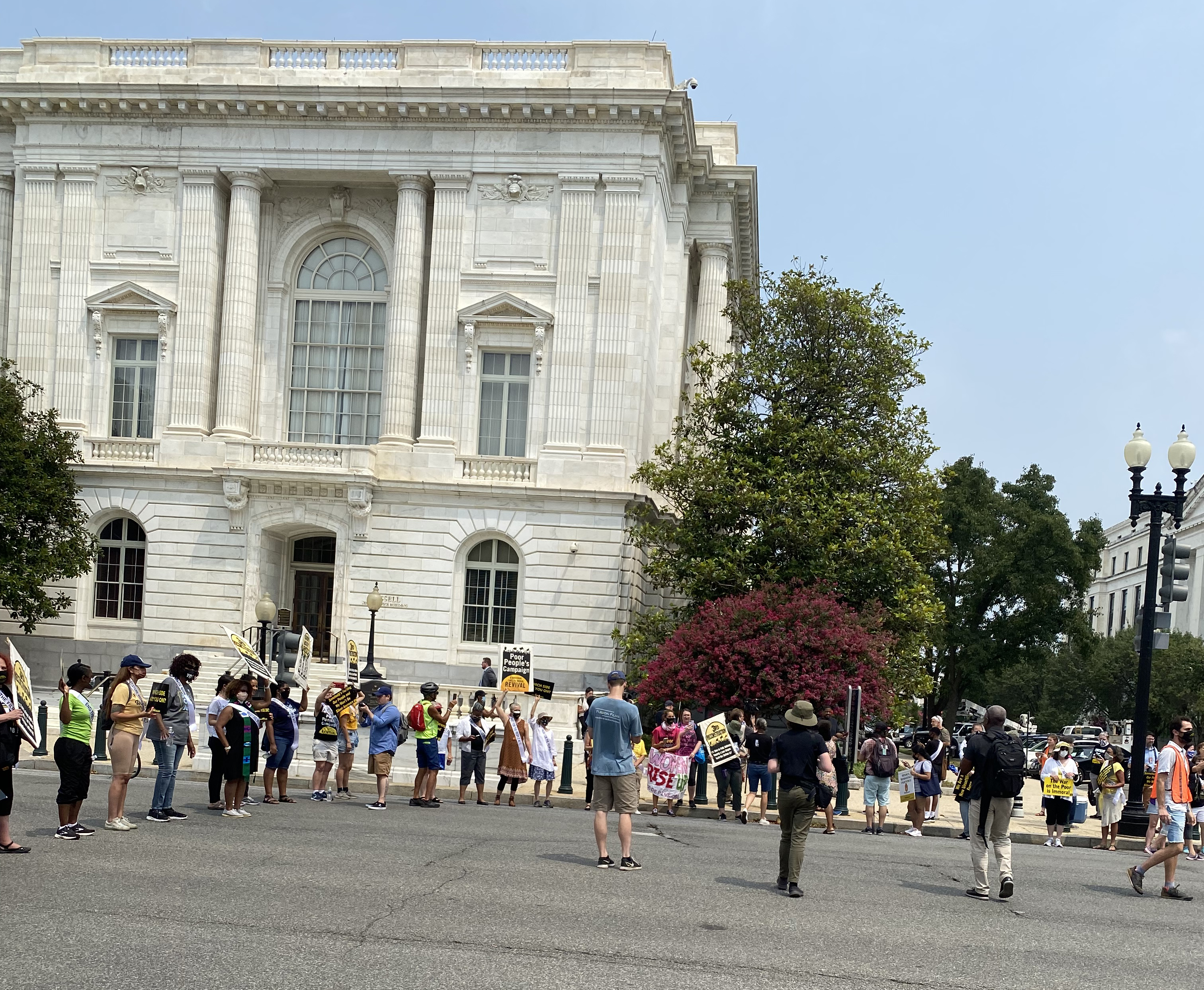 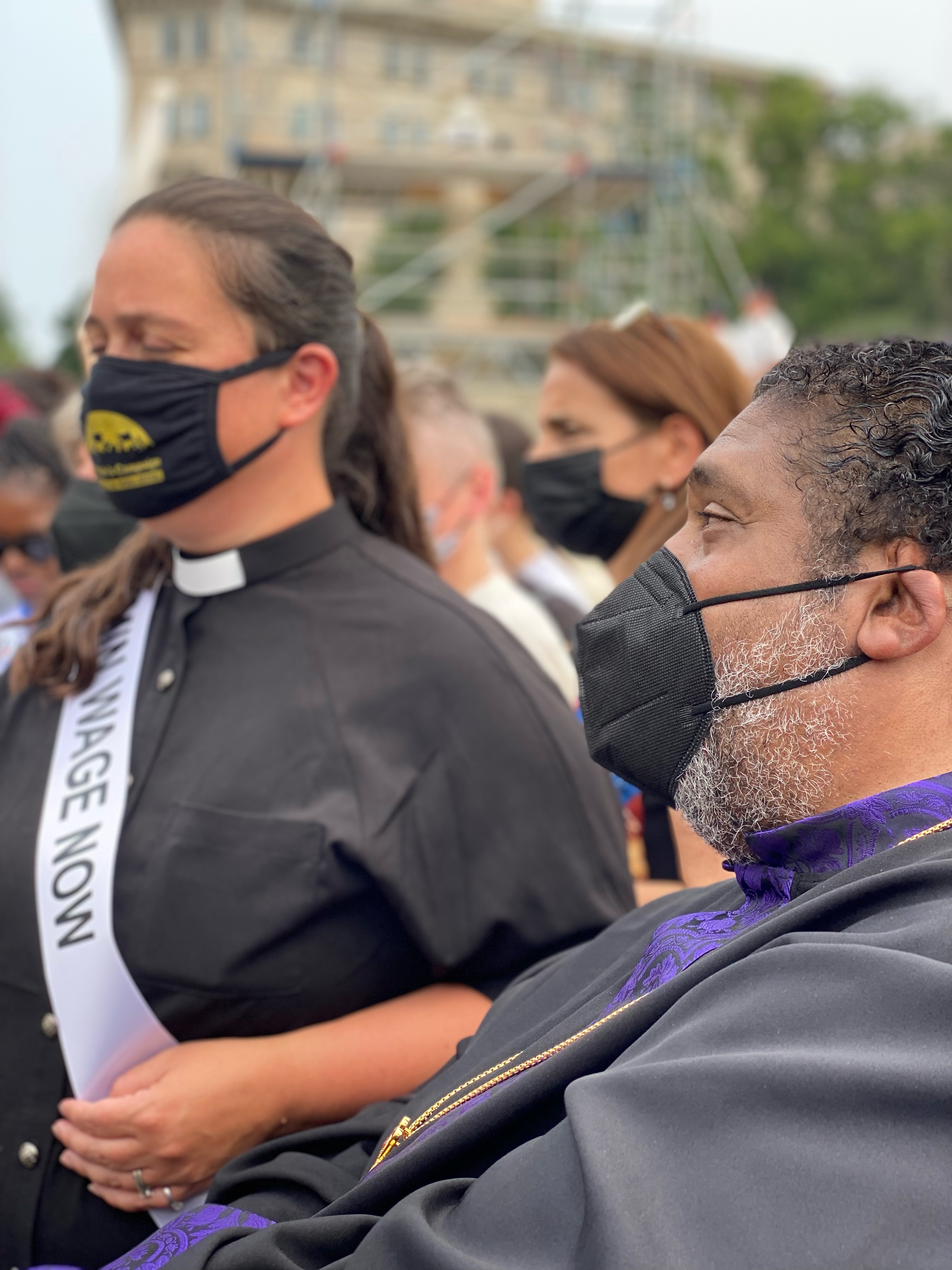 So we came together as women on the shoulders of those women 173 years ago who called for equal rights and voting rights for all. Just last week Congresswoman Joyce Beatty, chair of Congressional Black Caucus, and other activists were arrested at the Senate Hart building calling on the need for voting rights.  But we and most US citizens are not allowed in Congress these days.  So we created a circle blocking all the streets between the Hart Building and Congress singing and chanting together as we were picked off one by one and arrested.  We were calling on Congress to Pass the Peoples Act, to move the funds from war and weapons to the needs of the people and to call for the right to vote for all.  Kicking off a Season of Nonviolent Moral Direct Action that is moving to our cities and Senators offices this coming Monday.  Find a Poor Peoples Campaign near you to join in on Mondays. 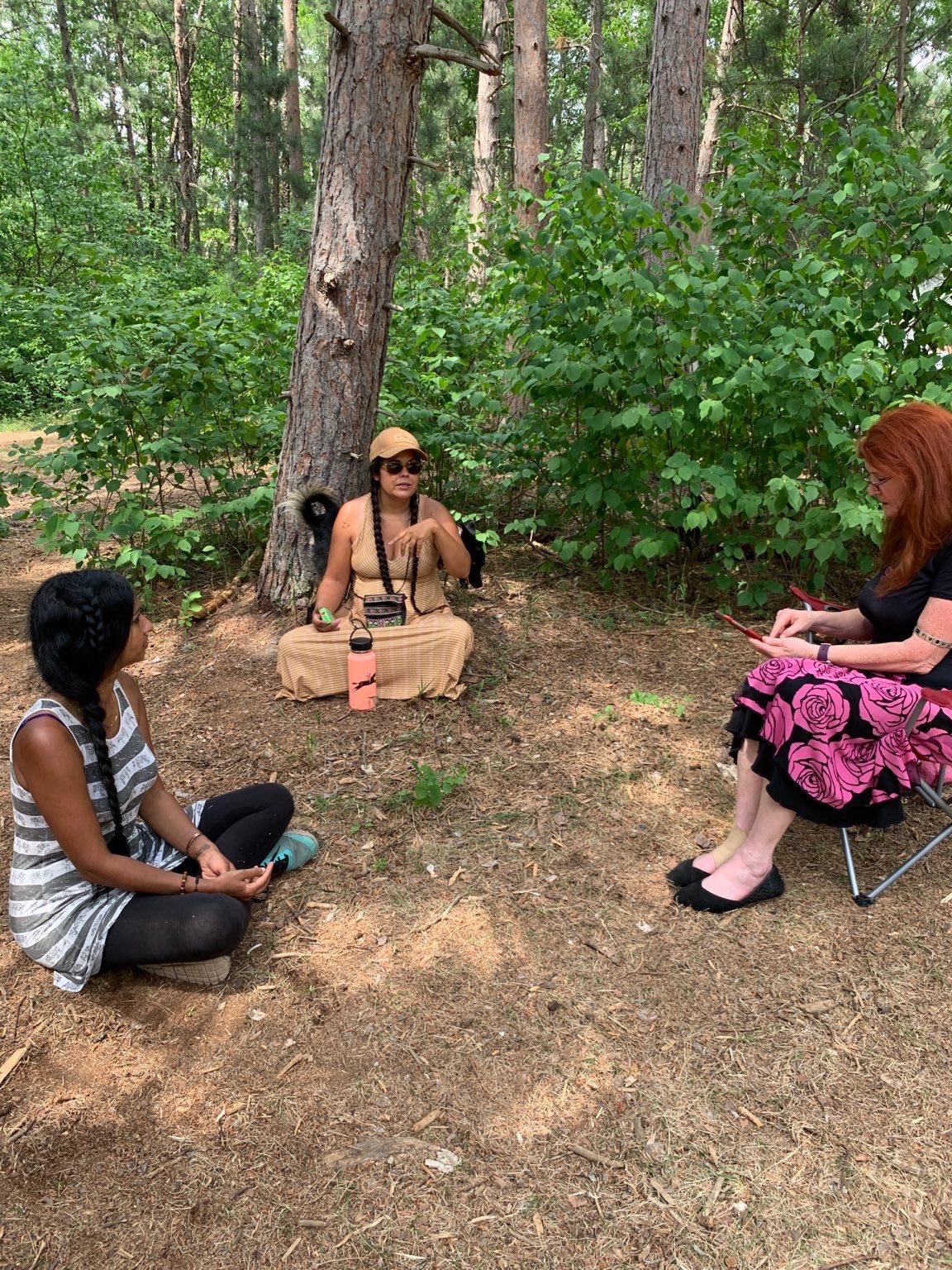 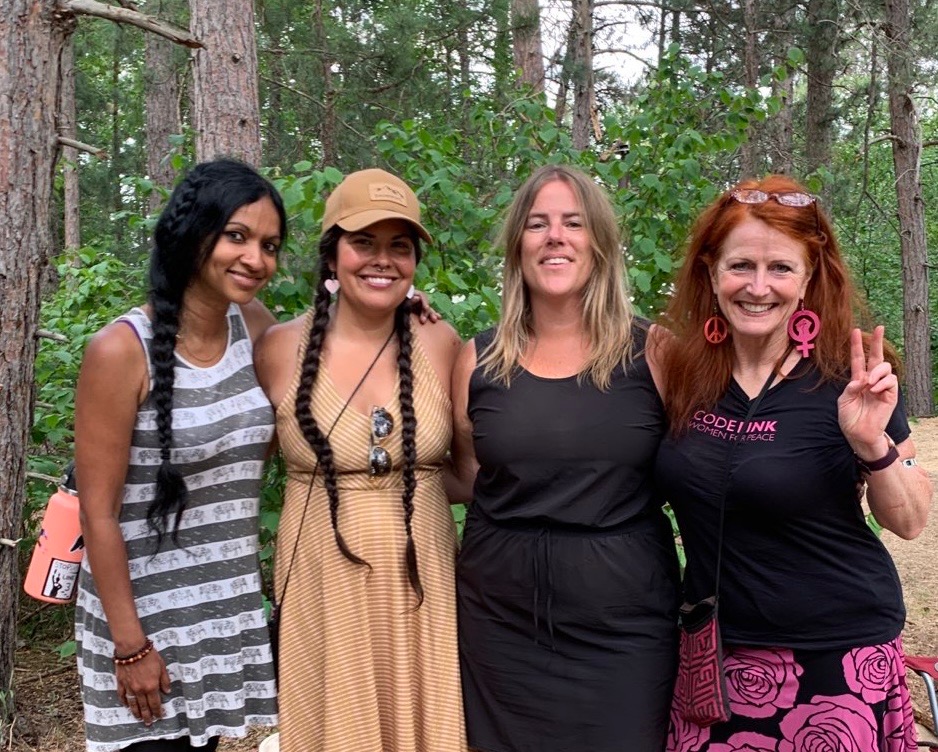 We stand at this moment in history where we must be throwing ourselves at the machine, the violence of those with against those without is like a runaway train.  I was at Line 3 a few weeks ago, where the Rainforest Action and Giniw Collective team put their bodies on the line to stop the violence to the indigenous communities and their wild rice economy, the pipeline will destroy lakes and rivers and water which is essential to life.  Water Is Life. 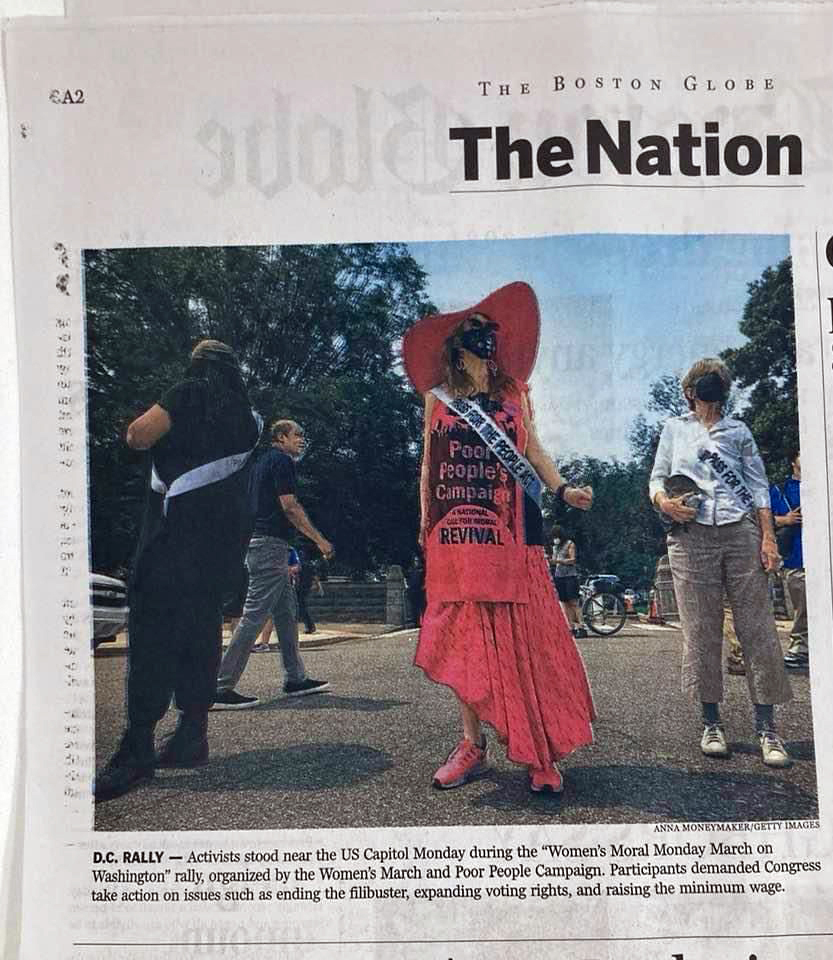 The Poor Peoples Campaign has been working for years to raise the needs of the people, 140 million Americans living at the edge of poverty while the budget for war continues to escalate.  It is unbelievable that Congress is passing laws while we are locked out of our right to protest.  It is madness!  More money for war is madness.  It is why I leapt at the chance to join so many women to say NO!  To call for a commitment to the people!  The photo of me from the protest was in the Boston Globe, the pink captures the attention of people, it is the color of love and we are all pink inside. 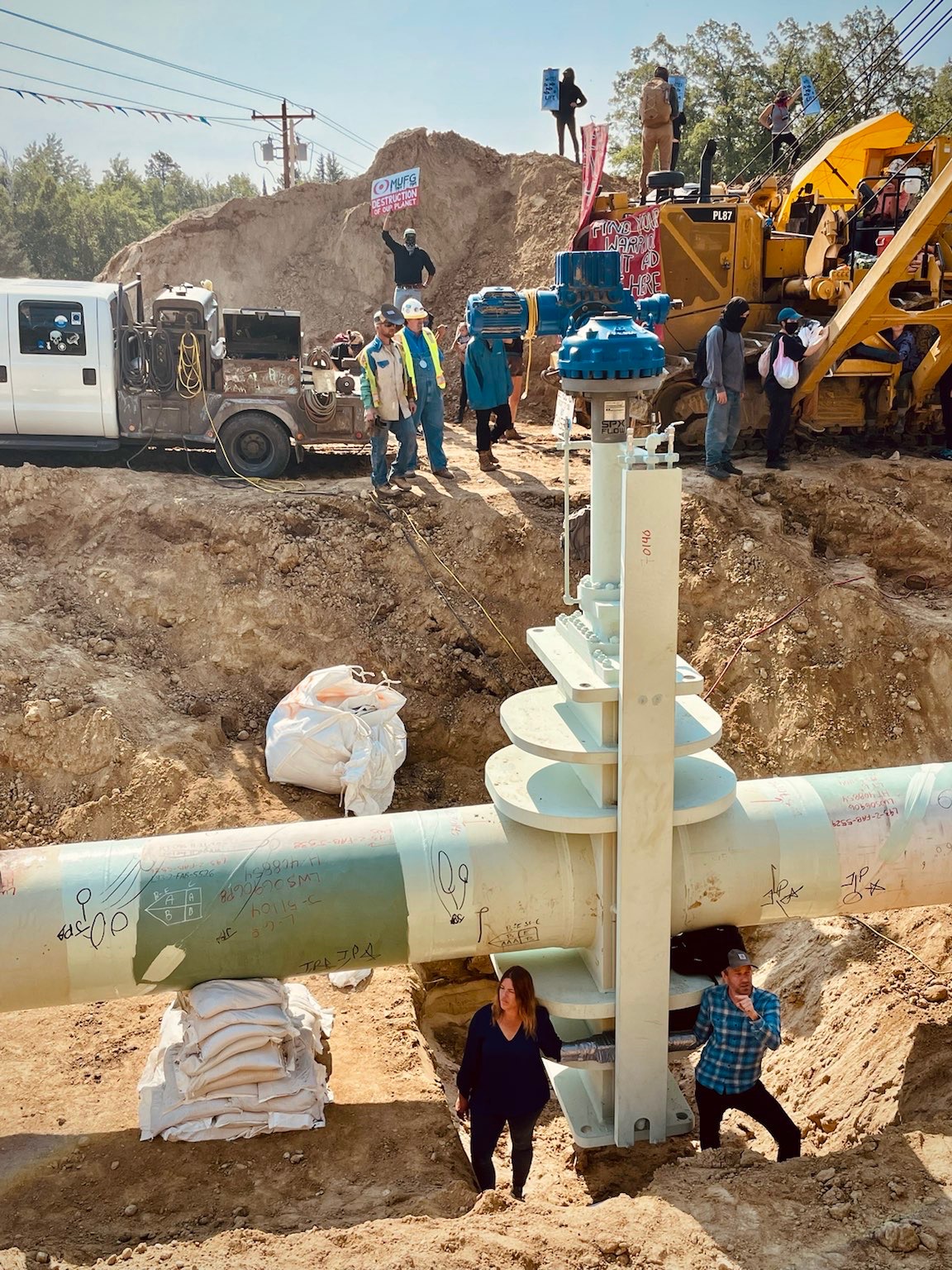 I encourage you to get out in your communities, to travel to Line 3, to disrupt your member of Congress or the Senate this August while they are home.

They are not hearing enough from us!  Inequality and wars must end!!!  But it will take us in the streets to push the machine backward.