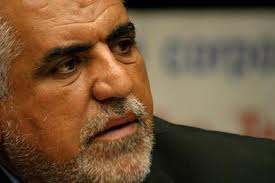 When US Labor Against the War (USLAW) learned that Iraqi unions had been invited to attend last months AFL-CIO convention in Los Angeles, but were offered no financial assistance to travel, a decision was made to use USLAW Labor Solidarity Fund resources to underwrite the expenses of at least one union leader.  USLAW decided to pay the expenses for Hassan Juma'a Awad, President of the Iraq Federation of Oil Unions, to come to the US, attend the convention and then speak at events in LA, the Bay Area and New York City. CODEPINK and Iraq Veterans Against the War joined as a co-sponsors of Hassan's West Coast speaking events.

In his 2005 Guardian UK Op-ed "Leave our country now" Hassan Juma'a Awad compares life under Saddam Hussein's government and the US-British military occupation. Under Saddam, a worker's right to organize a strike were basically robbed. Today, Hassan continues the same struggle for rights under the Nouri al-Maliki government.

Last month, Hassan spoke to a group of Iraq war veterans, peace activists and labor workers at a union hall in San Francisco, California. He talked about the hardships experienced under the Maliki government with the lack of labor laws and government push-back on legislation. Transition into the new government hasn't been smooth for union organizers especially when a new Parliament comes to office. Unions have to re-start the process of gaining rights, which could potentially lead to prosecution if the government feels the economy and state are under threat by the workers.

US-British occupation still plays a role in post-invasion Iraq. Paul Bremer, former US diplomat, notable for his role as civil governor of Iraq, had refused to let the unions organize. He spent time developing other laws which Iraqi's consider useless. Hassan explains that his country is still unstable. It doesn't have 24-hours of electricity, the children live in miserable conditions and unions don't have health insurance. Under the Maliki government, Hassan faces threats of jail and fines for challenging the treatment of workers and the give-away of Iraqi oil to private corporations. He does not see democracy in Iraq as long as the country continues to be occupied.

As part of Hassan's speaking events, members of the group Iraq Veterans Against the War presented the Right to Heal campaign. It's a campaign cooperative with the Organization of Women's Freedom in Iraq (OWFI) and Federation of Workers Councils and Unions in Iraq (FWCUI) that bridges a demand for reparations for civilians in Iraq and Afghanistan, and veterans who served in either war.

Additionally, Inder Comar introduced a suit against the Bush Administration on behalf of an Iraqi single mother, Sundus Shaker Saleh. Saleh alleges that the Iraq War was a premeditated war against the Iraqi people -- and now she is the lead plaintiff in a class action lawsuit against six key members of the Bush administration.